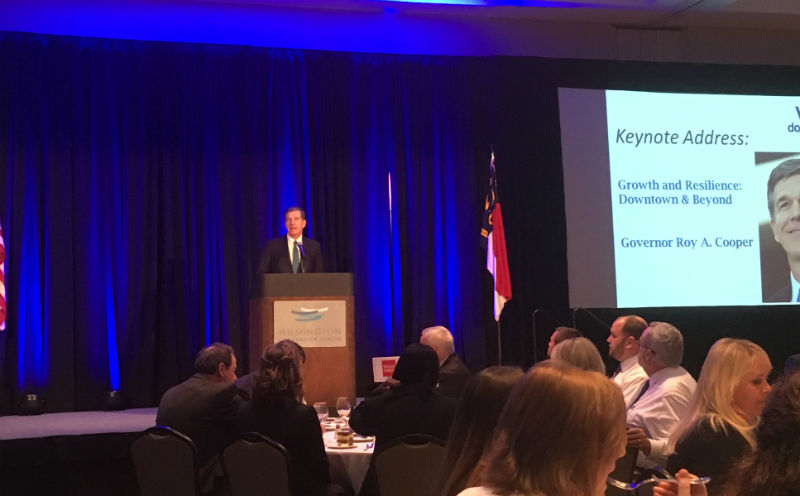 Governor Cooper was the keynote speaker at Wilmington Downtown Inc.’s luncheon event where he highlighted the resiliency of Wilmington business owners after Hurricane Florence as well as some issues that still need to be addressed. (Photo by Johanna Cano)
Hurricane Florence put a magnifying glass on some of the issues that already existed in the Wilmington region, including a lack of affordable housing, and recovery from its effects will continue for years to come.

Hurricane Florence caused over $17 billion in damages in North Carolina and $2 billion has been provided in state and federal aid. New Hanover County has received $100 million from that total, Cooper said.

With recovery underway, the state has been working to address some of the most pressing issues in the state.

“The problem of affordable housing is our greatest challenge right now, particularly as tourist season opens back up and people are temporarily in seasonal housing,” Cooper said. “It's going to continue to be more and more of a challenge.”

The state will work on getting people into permanent housing solutions, he said.

Another way to address affordable housing is through expanding and adding more benefits to the state historic tax credit, which encourages investment in the rehabilitation and reuse of historic buildings.

“I want to make sure that we are determined to make investments that help our downtowns thrive. I had it in my budget to make sure we extend the historic rehabilitation tax break,” Cooper said. “We know that this is an economic driver and it is worth the taxpayer investment. In my budget, I hope we end up giving more benefit for this kind of preservation. More tax credit for both non-income and income producing property in areas that had been declared disasters. If this passes and gets done, you will have an extra incentive to repair and restore historic buildings in downtown Wilmington.”

As the areas affected by Hurricane Florence in the state begin to rebuild, Cooper said it is important for them to rebuild smarter and stronger. This includes repairing and elevating interstates that were flooded during the storm.

“We are going to have to build an emergency operation center that will sustain 150 mile-per-hour winds or a Category 5 storm,” Saffo said. “We didn’t know until the middle of the hurricane, or at least I didn’t, that we didn’t have a building that could sustain 100 plus miles-per-hour wind for temporary sheltering.”

New Hanover County Board of Commissioners Chairman Jonathan Barfield Jr. agreed with Cooper that affordable housing is an important issue to address.

“Businesses are looking for homes that are affordable for their workforces. If you don’t have housing affordability, they may not come to your community,” Barfield said.

The luncheon was hosted by Wilmington Downtown Inc., which shared some downtown Wilmington accomplishments in 2018 including the addition of 42 new businesses, 261 new full-time jobs and 13 entrepreneur ventures. The total value for announced projects and those under construction in downtown Wilmington last year was $275 million, said Ed Wolverton president and CEO of WDI.

“We also did a lot for hurricane recovery,” Wolverton said. “The Over Flo campaign was something that we helped put together that helped say downtown was reopened for business, but also to help other nonprofits in the community. We ended up raising over $128,000."

“We have to realize that these are not 500-year storms anymore,” Cooper said. “Unfortunately, this is a new normal, I hope and pray that we never see another Florence in my lifetime or yours, but we owe it to our citizens, we owe it to people to make sure we are ready in the event.”

The governor's remarks came during one of his Tuesday stops in Wilmington. Cooper also checked in on Hurricane Florence recovery at Port City Java on North Front Street, Swahili Coast and Desert Rose and the University of North Carolina Wilmington.

"It was an honor to host Governor Cooper this afternoon," said UNCW chancellor Jose V. Sartarelli in an email. "Throughout his visit, he was very engaged in learning more about our various construction projects and had a great appreciation for our renovations at Randall Library. He was appreciative of our faculty and staff’s efforts to help prepare the workforce of tomorrow, and he expressed his admiration for our response to and recovery from the hurricane.”