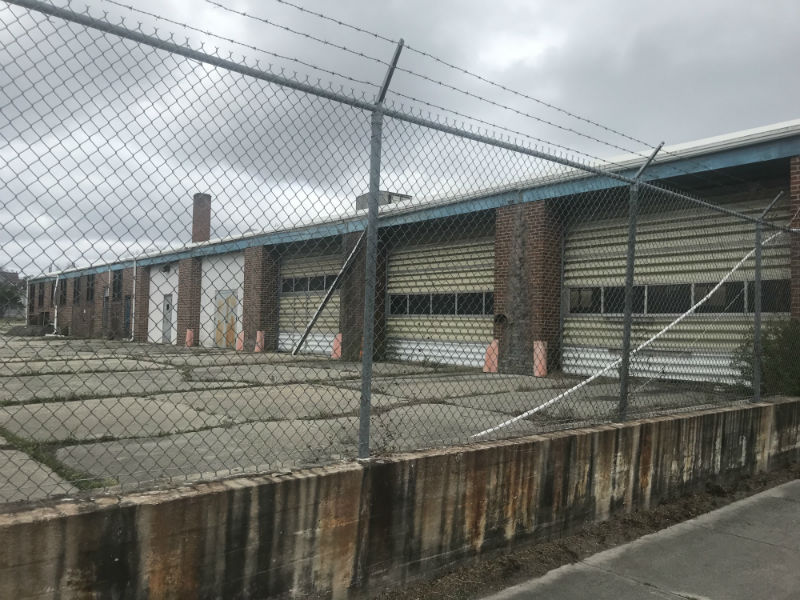 The former Wave Transit maintenance property was recently valued at $390,000, and Wilmington City Council plans on reviewing an RFP draft at its next meeting. (Photo by Cece Nunn)
The 1.5-acre property at 1110 Castle St., formerly a Wave Transit building being eyed for potential redevelopment, is valued at $390,000, according to an appraisal report made for the city of Wilmington.

City council members will hear a resolution to declare the city-owned property as surplus and review a Request for Proposal draft that invites commercial, residential or a combination of uses, at their next meeting Tuesday.

The appraisal, completed by Ingram & Company Inc., was not a complete appraisal but rather a statement of the findings of the evaluation report, according to a letter by the appraisers.

The city purchased the Castle Street property in 1974. The property was used as a bus maintenance facility until Wave Transit left the site in June 2015.

After declaring the property as surplus, the city could do an RFP that includes stipulations and criteria beyond simply selling the property to the highest bidder, Dylan Lee, spokesman for the city of Wilmington said Friday.

The RFP draft invites corporations and nonprofits to submit project proposals, and the city is open to proposals submitted by a collaboration of entities, stated the draft.

“The City of Wilmington is interested in the redevelopment of this property. A public purpose is a use or development with a benefit to the City’s general population. A public space is an area that is open to public access such as a community center or park,” stated the RFP draft. “The improvements to the property and the use or service provided on site should incorporate a community asset that is inviting to the public. The proposed project should be in harmony with the surrounding neighborhood.”

A resolution approved by the city council in 2017 requires city-owned property identified for residential development to include workforce housing as one criterion for evaluating RFPs.

Proposals that include workforce residential uses are likely to get preference in consideration over all other proposals, officials said.

Proposals should define the scope and scale of the project and must include a detailed description with any notes on whether it includes housing or job creation and the organization’s financial capacity to complete the project including audited financial statements.

There will be a preproposal meeting for those interested in submitting a proposal. The date and location for the meeting are yet to be determined.

George Taylor, chairman of TRU Colors, created a nonprofit corporation called TRU Impact and submitted a proposal to the city to purchase the property to develop it into a brewery and offices to house social mission initiatives.

The city council will meet Tuesday at 6:30 p.m. at City Hall.