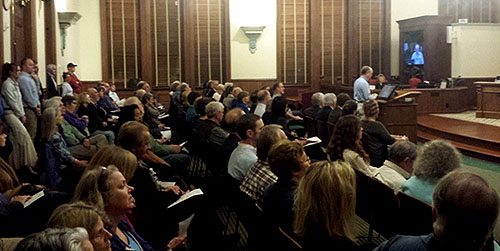 Mile Giles, coastal advocate with the N.C. Coastal Federation, speaks to the New Hanover County Planning Board on Thursday evening. (Photo by Vince Winkel)
The special use permit decision is headed to the county commissioners.

After almost a year of meetings, public hearings and work sessions, the New Hanover County Planning Board on Thursday night voted 6-1 to approve the changes in the SUP, sending it on to the county board of commissioners for approval.

The vote came just hours after a compromise was announced between a coalition of local business groups and the N.C. Coastal Federation, which had been at odds over some of the language in the amendment.

“It’s all about compromise,” said planning board Chairwoman Donna Girardot to a packed room in the county courthouse in her opening statement. “Did each group get everything it wants? I doubt it."

The SUP requires that some industries meet certain conditions before being allowed to open a business in New Hanover County. Business leaders don’t want an SUP that is too restrictive and discourages industry from locating here, while others contend that a strong SUP is needed to keep potentially polluting industries from damaging the region.

The compromise included amendments to the definition of intensive manufacturing and eliminated definitions of limited and general manufacturing. It also included adjustments to the community review process, such as reducing review times from 35 days to 20 days, depending on the type of industry involved.

Several individuals from both sides of the aisle spoke in support of the amendments.

“This is a consensus document, and it will work for everybody in this room,” said Cameron Moore, executive officer of the Wilmington-Cape Fear Home Builders Association.

“With all that work, it is very gratifying to say there is a consensus. Is it perfect? No. But it’s a solution we can all live with. It is a good solution,” said Hal Kitchin, an attorney and the former Wilmington Chamber of Commerce board chairman who had worked on the SUP issue since 2013.

After the meeting, Mike Giles, coastal advocate with the N.C. Coastal Federation, said, “The federation is grateful to the opportunity to have a seat at the table and be part of an effort to improve the county policies, which will help further the county’s economic strategy for sustainable growth and protection of our critical natural resources. We also thank Donna Girardot for her leadership during this six-month process. Now the real work begins and this effort highlights the need for citizens to become engaged and involved in their government.

“Although there are important components of what we feel were critical for a strong SUP that were not part of the approved language, we feel the improvements, if properly applied by staff, the planning board and county commission will ultimately result in an informed decision on what industry is appropriate for our community,” Giles added.

The lone vote against was from planning board member David Weaver, who questioned why there was a need to rework the SUP, asking if the economy was weakening in the area.

Girardot reminded everyone that nothing is permanent.

“As we test drive it during the next year we are prepared to make changes and improve on it as circumstances warrant," she said. "We need to remember the draft we approved to forward to the commissioners for action is a temporary amendment, which will once again be under review, as will all the county’s ordinances, as we work our way through the upcoming UDO [Unified Development Ordinance] process.

“The fact that we took our time during this process and included organizations, like the N.C. Coastal Federation, the Wilmington Chamber of Commerce and BASE [Business Alliance for a Sound Economy], who contributed professional expertise and a dedication to work together to craft a document that can meet the community's needs was instrumental to our success tonight,” she added. “I am also grateful for the hundreds of citizens who attended the five work sessions, September public hearing and that we heard from via email and phone.”

The commissioners could have a vote on the SUP at their March 6 meeting.