Crafting Knives For A Lifetime And Legacy 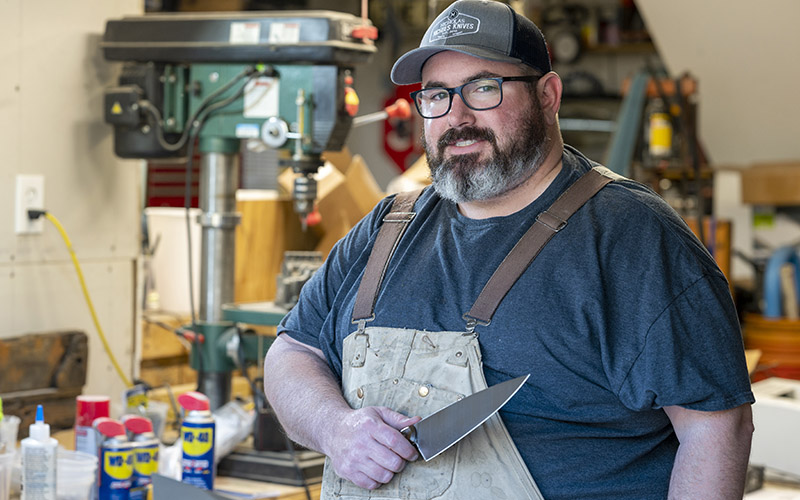 Nicholas “Nic” Nichols founded a knife-making company in 2015, working out of a space at his home in Leland. (Photo by Michael Cline Spencer)
Most of us probably don’t think a lot about the knife we grab to chop an onion or slice a tomato. Nicholas “Nic” Nichols not only thinks about knives, he obsesses over them.

As a kid growing up in Brunswick County, Nichols often explored the automobile junkyard his father ran for 35 years. While some people picked through the junkyard for usable parts, Nichols found stories, stories that were told through items left in old and wrecked cars.

“We would get cars in, and it was like this anthropological search of seeing what was in the car, you know? Clothes and shirts and things written on them,” Nichols said.

He also would find knives, maybe left in a glove compartment or an old toolbox.

“Finding the knives was always a cool thing,” he said. “And being like a little kid, like Cub Scouts and stuff, you know, learning about knives. It just kind of became a love affair.”

It’s a love affair that’s paid off for Nichols, not just as a business concern (“sales have been crazy” since he was named a runner-up in the Garden & Gun’s 2021 Made in the South Awards) but also as a craft that feeds his soul.

Knives, however, weren’t his first passion – food was.

Nichols came of age in what could be called the Foodie Boom. Instead of Schoolhouse Rock! after school, PBS and cable channels served up a veritable buffet of cooking shows. And Nichols ate it up.

“When I came home from school I would watch the cooking shows on PBS, you know, Graham Kerr, Martin Yan and stuff like that,” Nichols said. “I just kind of fell in love from there. Then the Food Network came along, and everybody kind of fell in love with all that stuff.”

The time in front of the tube ultimately led to culinary school and plenty of time wielding a knife, sometimes for 10-hour stretches.

Although the love affair with knives was rekindled in the early 2000s in culinary school, it was more of a marriage of convenience and a practical partnership.

During his younger days – when he was a tinkerer with steel, metal and other found objects – Nichols made knives from railroad-tie stakes and old lawnmower blades. He said his first artisan work was crafting various types of ornamental steel.

“I kinda tinkered in knives, but not a lot because it was a little extreme. I wasn’t really ready to go there,” he said.

Friends soon urged him to formalize the obvious connection between his two passions.

“Because I was in the culinary world, they were like, ‘Oh, maybe you should make me a kitchen knife,’” Nichols said. “Well, I attempted a couple of them, and they were terrible.”

“It was more like a shovel or a chisel than a knife,” he said with a laugh. 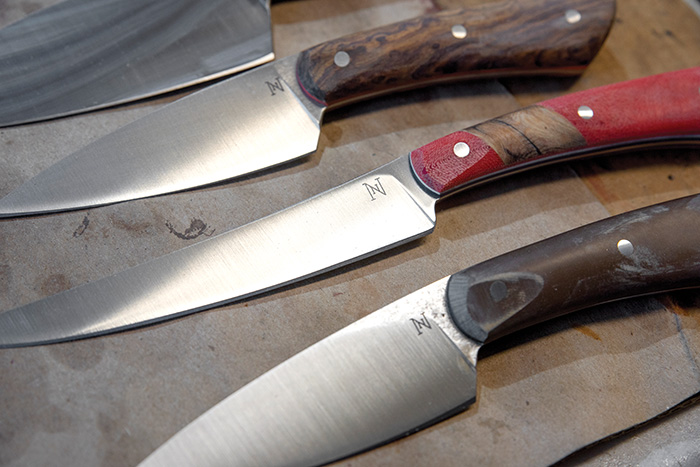 In 2015, Nichols got serious about the knife craft. Although he uses a high-grade special steel for the blades (he initially bought a few rods at a time; now he buys it by the palette), the handles offer a chance for some creativity as well as some fun. Thus was born knives made with wood from the Battleship North Carolina, basketball courts at UNC and N.C. State (a Duke knife is on his bucket list) and even the famed Fenway Park, home to the Boston Red Sox.

Nichols said the most satisfying work is when someone trusts him with a special piece of wood – perhaps from a church pew or a piece of heirloom furniture once owned by an ancestor.

“When you start working with a one-of-a-kind piece that honors a person or a thing, it’s humbling,” he said. “It’s also sort of terrifying. I mean, there’s a whole bunch of things that go through your head when they trust you with that.”

One piece of wood he used for a handle came from Lumina, the dance and entertainment pavilion that stood for decades near the site of the current-day Oceanic Restaurant. (The legendary building was demolished in 1973.)

“It’s very humbling. It feels like I’m a caretaker or a curator, I guess,” Nichols said. “How do I help the person pass this treasure on?”

As for his own legacy, it’s engraved into each blade he carefully crafts and hones.

Company description: Founded by former chef Nicholas Nichols, the company sells custom cutlery made from historical materials from in and around Leland, including reclaimed teak decking and steel from the Battleship North Carolina’s hull.

Product distribution: USA Made Blade and his own e-commerce store at nicholasnicholsknives.com.

What made the company decide to make its goods locally? Nichols: “Because it is where we are from.”

What’s your target market? Nichols: “Anyone looking for high-quality cutlery”

What do you guys have planned next: Nichols: “I would love to have [my] own shop at some point and maybe a retail space in the future.”

CEA Film winner: Behind the lens with Honey Head