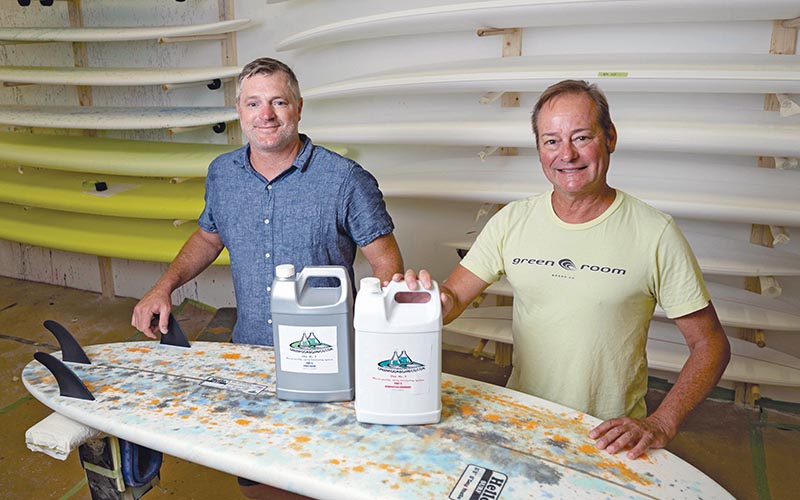 Cliff Ray, owner of the Hello.SURF brand, and David Ray, general manager of Green Room Board Co., stand with products made at the Dutch Square facility the firms share. (Photo by Michael Cline Spencer)
Two Wilmington-based manufacturers in the surfing industry continue to grow after co-locating under one roof.

Paper Plane Surf Co., which makes surfboards and holds the new Hello.SURF brand, and Green Room Board Co., a manufacturer of surfboard composites, are sharing space in Dutch Square Industrial Park, a move the companies made about a year ago.

Each business takes up about half of the 12,500-square-foot building off Windmill Way, said Cliff Ray, owner and founder of Paper Plane Surf Co., which is a sister company to his original water and ocean rescue boards business, P2P Rescue.

The two companies agreed to share the space based on a need: Ray’s business had the extra space to fill in the Dutch Square building, and Green Room had outgrown its previous space in the complex.

Green Room General Manager David Ray (not related to Cliff Ray) also said that the company had always wanted to share space with a surfboard manufacturer. The decision for Green Room to move was strategic for its growth.

“We’ve always desired to have our production facility and our own in-house laboratory on-site with a board production facility because we use that technical data in every batch,” David Ray said. “So, we are constantly doing research and development. And because it goes hand-in-hand with what Hello.SURF and Cliff were doing, it was a good marriage.”

Having Green Room in the building helps Hello.SURF save on costs to manufacture its line of intro-level surfboards, which come in eight different sizes, Cliff Ray said.

Blank foam surfboards, made in the High Point area, are sent through a computer numerical control (CNC) machine where, using 3D models, a board is cut down to size. The foam board is then moved into a shaping room, sanded and shaped to model.

Shaped boards are painted with a paint splatter design and then covered, or glassed, with resin made by Green Room.

“Building surfboards for local surfshops helps to save on shipping costs, which equates to a better price for the customer. We’re also very proud to build using the local resources of Wilmington and also from across the state. All of our raw materials for building Hello.SURF are made in the USA,” Cliff Ray said.

Cliff Ray created the Hello. SURF business to branch out into an increasingly lucrative recreational surfboard market, he said.

“The whole thing was just a necessity during COVID, when it about shut down P2P Rescue,” he said. “We had all this stuff … and then that’s where we found the whole intro-to-surfboard market.”

Cliff Ray this month hired a full-time CNC machinist. He also has a full-time surfboard glassing employee to coat the boards.

As the P2P business recovers, Cliff Ray aims to expand his surfboards business into more stores locally and on the East Coast. Hello. SURF boards are currently found at Sweetwater Surf Shop in Wrightsville Beach and CB Surf Shop in Carolina Beach.

“When we get referrals and orders we just direct them to Cliff … I like to consider it a co-op than anything else,” David Ray said.

Hello.SURF, however, is just one of Green Room’s many customers, David Ray said.

Green Room distributes its resin – which it makes at the site in Wilmington – to other factories around the country and outside the United States, as well as the materials for companies to build their own surfboards.

Green Room carries 50% of its resin business in the surfboard making market. For the other half, the company manufactures specific resin for other commercial and industrial uses, such as construction, aircraft and yacht building, skateboard manufacturing and furniture.

In its old facility, the company was not able to produce the volumes necessary to do the various types of products.

“Because we work with the product and have an in-house laboratory, we have the ability and are quite often asked to do custom blends that are specific … not just sell the surfboard resin for something else that that may not be specific,” David Ray said. “And that’s what has been a tremendous part of our growth over the last three or four years, is going outside of the surfboard world.” 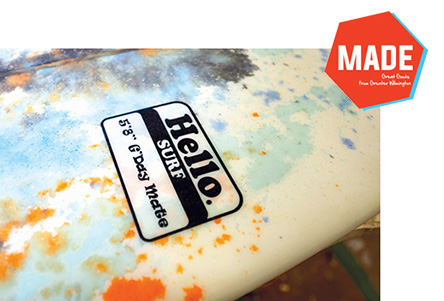 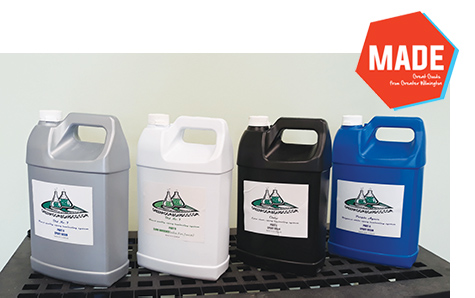