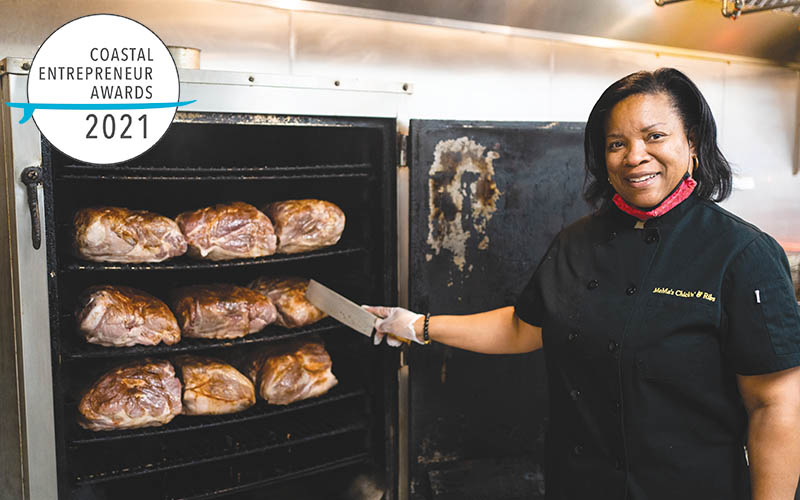 MEMA’S CHICK’N’ & RIBS | MINORITY-OWNED BUSINESS MYRA MCDUFFIE, CO-OWNER| YEAR FOUNDED: 2017 | EMPLOYEES: 5. (Photo by Erin Costa)
It’s been said that the road to success is always under construction, and the saying rings true for the McDuffie family.

The restaurant and catering service quickly gained a loyal following locally, and thanks to billboards on Interstate-40, has become a stopping point for many travelers from out of town. There is a world map on the wall at MeMa’s where people from every state and continent have pinned where they are from.

Myra and James often share with visitors historic maps of Burgaw and Moores Creek National Battlefield to encourage them to stay a while.

Just two years after opening, the McDuffies purchased land along N.C. 53 in Pender County, with the intent of creating a multi-million-dollar shopping center that would house MeMa’s new location as well as additional retail outlets. Plans for the new location include three event spaces, an outdoor dining area, a commissary kitchen and manufacturing facility for the company’s signature barbecue sauce and a retail store featuring MeMa’s and other locally made products.

But following the onset of the COVID-19 pandemic, the bank that had approved the McDuffies’ loan withdrew $800,000 in funding, dealing a devastating blow to the couple on top of the revenue losses they had already experienced as a result of the pandemic.

The McDuffies launched a Go- FundMe campaign last summer to raise money for their efforts, and despite bringing in nearly $200,000 by November, they were still far short of where they needed to be to move forward.

Thanks to a referral from the Small Business and Technology Development Center at UNCW, the McDuffies reached out to Genesis Block, a Wilmington-based nonprofit that provides business development services for minority-owned businesses (see page 11). Now through a partnership with Genesis Block, Folla Capital and Hipp Architecture & Development, they are back on track to meet their goals through a new crowdfunding campaign.

While the details of the investment plan are still being finalized, Myra McDuffie said she expects those details to be released to the public within the next 30 days. Anyone interested in supporting the project will be able to contribute with a set return on their investment.

“Essentially the community will be buying shares of the business,” Myra McDuffie said. “We want the community to help us build this for the community so that we can all stand back and see what we’ve brought to Burgaw.”

Once the funding campaign goes live, there will be a 45-day window for investments.

“Our current lease has been extended through May 2022, so we need to be in our new building by then,” Myra McDuffie said. “The new building is going to take nine months to build so time really is of the essence.”

Click here to meet all of this year's winners