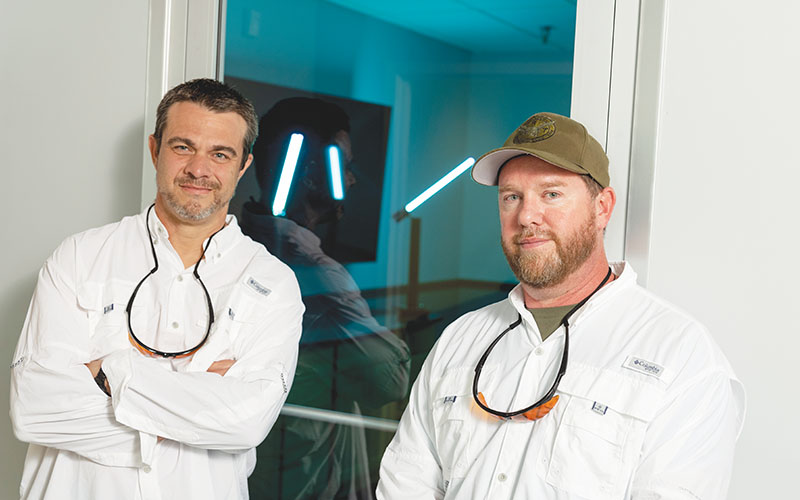 Stephen Bowen (from left) and David Greenough, co-founders of USUVClean, recently used their UVC process to treat G-Code Tactical Holsters in Burgaw. (Photo by Michael Cline Spencer)
As cases of the novel coronavirus began to grow in the U.S. starting in March, David Greenough remembered his days in the Air Force, when he found out ultraviolet light was used to make sure missile guidance systems weren’t contaminated by bacteria or other microscopic residue.

Those memories helped influence the start of the Wilmington resident’s company, USUVClean, co-founded by Stephen Bowen. Greenough’s wife, Melanie, is the firm’s CEO.

“COVID-19 was going around and it was getting bigger and bigger, and I was like, ‘I wonder if there’s another way to clean ... to sterilize a place besides using chemicals,” David Greenough said.

That’s when his Air Force memories kicked in. Now, David Greenough and Bowen are using custom-made lamps that emit UVC light for clients who want another tool to try to get rid of germs. It’s a type of ultraviolet light that comes from the sun but doesn’t reach Earth because of the ozone layer, explained Bowen.

UVC has been used as a sterilization tool in hospitals, including at Duke University.

According to a Duke Health article on the topic in 2017, a large randomized trial led by Duke Health found that the use of UVC machines could cut transmission of four major superbugs by a cumulative 30%.

“The finding is specific to patients who stay overnight in a room where someone with a known positive culture or infection of a drug-resistant organism had previously been treated,” the article stated.

And while the light hasn’t been definitively proven to kill the new coronavirus, studies have shown that it breaks down viruses, including other coronaviruses and bacterium like methicillin-resistant Staphylococcus aureus (MRSA).

A WebMD article in May examined the use of UV as a disinfectant in light of the coronavirus pandemic.

“The sanitizing effects of UV lights have been seen with other coronaviruses, including the one that causes severe acute respiratory syndrome (SARS). Studies have shown that it can be used against other coronaviruses,” the article stated. “One study found at least 15 minutes of UVC exposure inactivated SARS, making it impossible for the virus to replicate.”

The article also emphasized the potential dangers to humans, including cancer and cornea damage.

People should not get near the light, Bowen and David Greenough said. The World Health Organization says UV lamps should not be used to disinfect hands or other skin areas because UV radiation can cause skin irritation and damage eyes.

But Bowen and David Greenough can disinfect surfaces up to 8,500 square feet an hour, they said, and they have found a market for their services, winning a contract with the state of South Carolina to use their UV treatment on modes of transportation and buildings. They’ll also be training people in need of employment in South Carolina on how to use the technology.

In the Wilmington area, a recent job for USUVClean included treating 60,000 square feet for G-Code Tactical Holsters, a company that makes holsters and other weapons- related accessories in Burgaw.

Bowen and David Greenough both work for the New Hanover County Sheriff’s Office, where David Greenough is a full-time employee in the public relations division, and Bowen is a part-time sheriff’s deputy.

“This is a side gig now,” Bowen said, “but it seems like as more and more time passes, it’s starting to become full time.”

Bowen, whose other job is working in the film industry, and David Greenough have also come up with a way to check the effectiveness of their UV lamp system. They use a camera and monitor to see whether the light has saturated a space.

Bowen and David Greenough each have relatives who have suffered from staph infections.

“This is kind of like a personal thing for us,” David Greenough said.

The state of South Carolina and other organizations and companies aren’t the only places using UV technology to guard against viruses.

“With the coronavirus and other stuff, we just want to make sure people feel as safe as they possibly can,” said Craig Blanks, chef at Frying Pan. “It was kind of a no-brainer to us once we found out what it does and did the research on it.”

The idea came to the Frying Pan via Scott McCaffrey of Fire Mechanical.

“Scott takes care of about everything in this building,” Blanks said, referring to the Frying Pan, 319 W. Bay St. “He brought the system to us right when the coronavirus started getting in the U.S.”

The restaurant is open now, but while it was closed after Gov. Roy Cooper issued an executive order that closed restaurants, McCaffrey installed the system.

“We think it’s going to be the new norm for any commercial building, to put this in,” Blanks said.

Meanwhile, David Greenough and Bowen recently used their UV tool to treat a church in Wallace.

“We want to do as much as we can,” David Greenough said, “so we can get the community back to normal.”