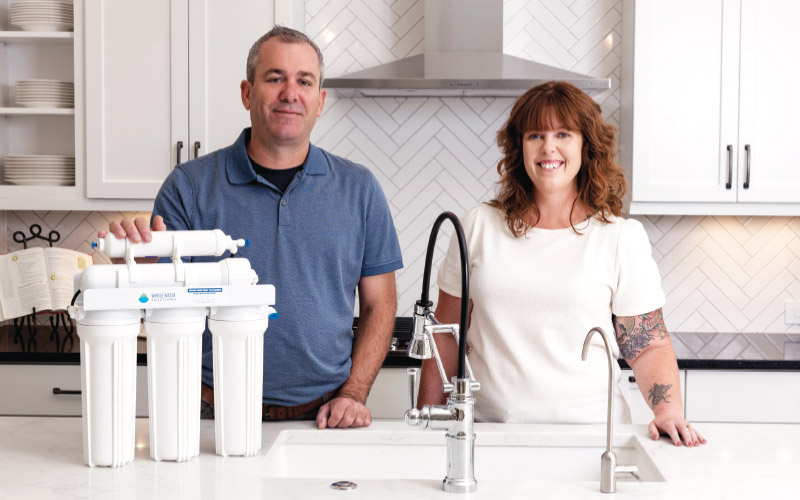 Paul Bergin and Nory Simoneaux started Whole Water Solutions in 2013, a company that developed and installs reverse osmosis systems under home kitchen sinks in Wilmington. (Photo by Michael Cline Spencer)
When Wilmington residents learned in 2017 that GenX, an unregulated chemical discharged by The Chemours Co. in Fayetteville, was present in their drinking water, many sought a way to get clean water for their homes.

That included buying bottled water at stores, getting 5-gallon water deliveries and even installing reverse osmosis systems for their kitchen sinks.

One company that has been providing reverse osmosis installations to Wilmington homes is Whole Water Solutions, founded in 2013 by husband-and-wife team Paul Bergin and Nory Simoneaux.

The business first operated on a part-time basis and then grew through word of mouth.

“Paul started in the commercial reverse osmosis world in 2012. While he was doing that, and learning about reverse osmosis, he realized we needed this in our house. So, he found a way for us to put it in our home that was cost effective and worked well for us,” Simoneaux said. “From there, friends started seeing our system and wanted them for themselves, so, that’s kind of how the ball got rolling on it.

“It just really developed based on people wanting an easy, convenient way to have reverse osmosis in their house,” she added.

Reverse osmosis is a process that removes small particles out of water, originally used for purifying saltwater.

While Whole Water Solutions got its start before the discovery of GenX in the Cape Fear River, the news of the contaminant brought significant growth to the business, she said.

“When the GenX was first found and the studies were coming down from N.C. State University saying that reverse osmosis was really your best bet, there were times that our phones were just ringing off the hook around-the-clock,” Simoneaux said. “That, in large part I believe, is because we never really raised our prices through this.”

“We really kind of became the company that everybody was recommending in GenX forums because of our affordability,” she said.

Whole Water Solutions provides a five-stage reverse osmosis system installed under kitchen sinks where water travels through five different filters and is then available on tap. The system can also be installed in refrigerators.

There “is a sediment filter, a granulated activated carbon filter, the regular carbon filter and then the water proceeds through a reverse osmosis membrane,” Bergin said. “At the end of that is a taste and odor filter, which in turns polishes the water and adds a little bit of minerals back.”

The reverse osmosis system used by Whole Water Systems was developed by Bergin.

“Over the years, Paul has started piecing [systems] together himself based on what pieces from different companies work best for him.”

Whole Water Solutions had the water produced by its system tested by Detlef Knappe, an N.C. State University distinguished professor of Civil, Construction and Environmental Engineering who specializes in drinking water quality and treatment.

“We live downtown, so we are a confirmed GenX receiving area. We had them test our home water and our system and it did beautifully,” Simoneaux said.

Whole Water Solutions is one of other companies in the area that provide reverse osmosis systems for homes. Those include Southern Water Conditioning, Shoreline Pure Water Solutions and Advanced Water Systems Group.

In April, CFPUA announced it was moving forward with a $46 million project to upgrade the Sweeney Water Treatment Plant, adding eight new granular activated carbon filters that are expected to filter 90% of PFAS compounds.

“The approval of this resolution today reiterates our commitment to providing the best possible drinking water to the people who rely on it today and, just as importantly, to those who will rely on it 10, 20, or 50 years down the road,” William Norris, CFPUA board chairman, said in a news release.

The plant upgrade is slated to start full operations in early 2022.

Efforts to provide a solution to GenX come at a time when confidence in safe drinking water is low in some cases, nonexistent in others.

“Because the confidence is gone public wide, we really are trying to make it so that even people who don’t make a lot of money can potentially have access to a system because people have lost that confidence across the board,” Simoneaux said.

The company, run by Simoneaux, who schedules appointments and is also a full-time Realtor with Nest Realty, and Bergin, who does the installations, has grown exponentially since its start, she said.

“Over the course of the past two years, we’ve quadrupled,” Simoneaux said. “I think that we have our systems in something like 400 to 500 homes right now in the Wilmington area.”

The company hopes to continue to provide affordable clean drinking water, which it achieves by being a two-person effort, she said.