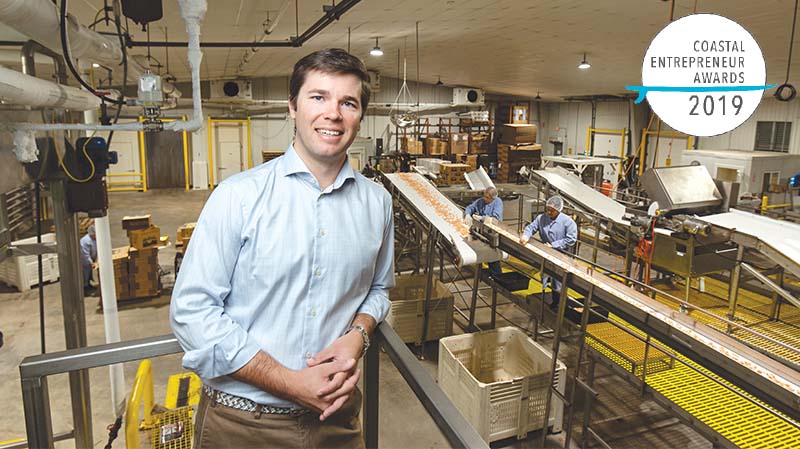 Manufacturing & Distribution CATEGORY WINNER | CARDINAL FOODS COREY BARNHILL, president & CEO | YEAR FOUNDED: 2017 | EMPLOYEES: 25 | Photo by Michael Cline Spencer
It is difficult to miss the bumper stickers and billboards that read, “Thank a farmer three times a day.” But rarely, if ever, does one read, “Thank a food manufacturer for making the most of farmers’ hard work.”

That is the mission of Burgaw-based Cardinal Foods LLC and Corey Barnhill, its president and CEO.

“The biggest part to our business is helping growers find avenues for byproducts of the raw material,” Barnhill said. “We are out there building relationships and asking, ‘How can we move that product into the marketplace and get the most money for the grower?’

“We run a very transparent model where it’s win-win for us and the grower, where we’re using our capital on the facilities side. They supply the raw material, and we take it to market and then we share in the proceeds.”

In 2017, Barnhill and investors purchased Solo Foods, a seasonal operation that solely processed blueberries. In 2018, the renamed Cardinal Foods expanded its operation to include processes for butternut squash and sweet potatoes, and now specializes in the individually quick frozen (IQF) space, boasting national clients including Sara Lee, Kroger, Dannon Yogurt and Starbucks.

“Our biggest growth opportunity is in the frozen veg side,” Barnhill said. “In the fall we added an additional salesman, from a competitor, named Tripper Showell that brought with him years of experience.

“Growing sales is our main focus right now, as we feel fairly established on the blueberry side, which is one of our core items. We have taken a very big stance in the butternut squash area. Butternut squash, sweet potatoes, beets and blueberries are our four major, core items.”

But if Barnhill’s and his partners’ plans materialize, Cardinal Foods’ growth will include more than the expansion of processing.

“We have been working with a number of major food manufacturers on some proprietary R&D projects that look very promising, and that will be hitting the market in the fall,” said Barnhill. “That’s been our main emphasis, along with working on veg and growing that product line.”

Cardinal Foods works primarily with growers from North Carolina, a business reality that serves as a cost-saving measure for the company and its suppliers.

“Mainly, it is a freight advantage for the grower and ourselves,” Barnhill said. “We don’t want to be hauling produce up and down the road. It’s not very efficient. Of course, depending on what the need of the end user is, it may lead us outside of the local market.”

A native of Burgaw, Barnhill returned to the Wilmington area in 2015 from Clinton, where he and his wife, Rebecca, lived for five years after acquiring Southeastern Grain Co. LLC. Purchasing the operation that has become Cardinal Foods was a logical step to diversify Barnhill’s business.

“Through this vegetable opportunity we were able to service several of our similar growers that supply us grain,” Barnhill said. “It means a lot that our business is in the hometown where I grew up.”