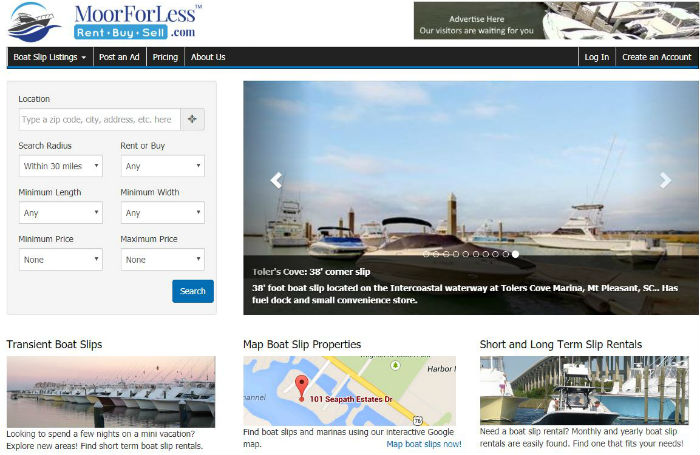 Moor For Less, a local startup that offers an online boat slip marketplace (as seen in the screenshot), is a winner of the NC IDEA MICRO grant, which the company will use to expand to more markets.
Moor For Less, a Wilmington-based online boat slip marketplace, is one of 15 recipients of the NC IDEA MICRO grant, according to a news release Wednesday.

“We had some success being 100% self-funded and organically growing the business,” said Keith Markfield, founder of the startup. “We had the opportunity to apply for the grant to accelerate what we are trying to do, which is exposure to new markets.”

Through the Moor For Less website, users can buy, sell and rent boat slips in Wilmington, throughout the East Coast and as far as Costa Rica.

The Wilmington startup was chosen from 136 applicants throughout the state after a three-month application process.

MICRO grant recipients receive funding of up to $10,000.

NC IDEA also announced Wednesday that Wilmington-based Renaissance Fiber and Swell Systems are finalists for the Spring 2019 NC IDEA SEED grant. Recipients of this grant will be announced mid-May.

Moor For Less was founded in 2015 after Markfield noticed a problem in the local boating community.

“We saw the need out there, especially in Wilmington, where there is a lot of demand for boat slips and not as much available supply,” he said. “The boating community is fairly antiquated and there is a lot of insider paradigms there where you need to know somebody who knows somebody to get access to a boat slip. With the website, you don’t have to go to public land or wait in line for hours or get in fights, which has actually happened.”

“We are in a lot of markets up and down the East Coast,” he said. “Florida is a big market because it is year-round but were mostly continuing to look around the Southeast to get a little more penetration in those markets.”

NC IDEA is a private foundation that seeks to support entrepreneurs in the state, according to its website.

This recent MICRO grant cycle is the second for the foundation. The small project-based grant is designed to support young companies looking to validate and advance their ideas, stated the release.

“This cohort of grant recipients is a great representation of the diverse economic potential of the state,” said Thom Ruhe, president and CEO of NC IDEA, in the release. “For many of the companies at this stage, it is their first external validation that they are pursuing something that can become a great company; and it is very rewarding for us to help them realize that.”

“We are very excited,” Markfield said about winning the grant. “Being self-funded to this point is great and we had the luck of being able to do that, but we believe that by getting this grant it can really fuel the fire of growth.”