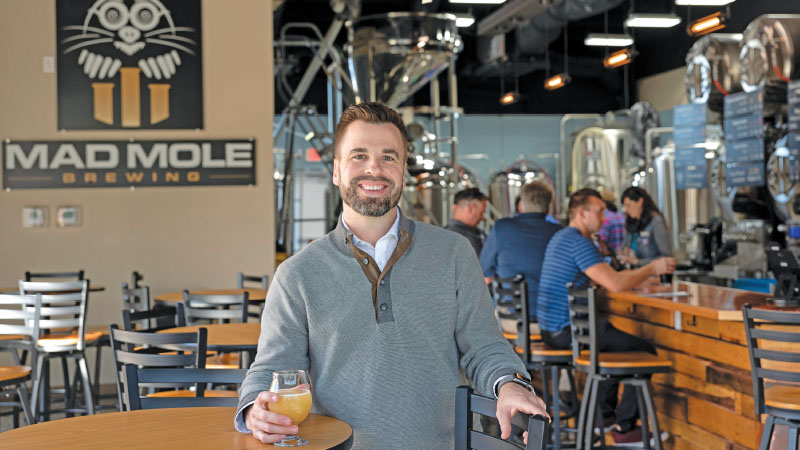 Varnum had been given permission by one of his clients – the owner of an existing brew house and a potential competitor – to proceed with plans to enter the Port City’s robust craft brewing scene as a partner.

“He was all for it,” Varnum said. But Varnum and his co-owners struggled as they sought the perfect name for their establishment, which opened last year on Boathouse Road.

“The intellectual property and trademark landscape with craft brewing is just very saturated,” said Varnum, who handles IP at Brooks Pierce for a variety of clients and who also specializes in legal issues affecting film and TV production.

“I tell most people in the beer industry, ‘All right, write down your top 10 names that you want. Throw those away, you’re probably not going to get those, write down the next 10 and anything that has anything to do with beer, probably already taken,’” Varnum said.

In the end, Mad Mole, a play on two co-owners’ names, met legal muster and the concept of a small, cozy place that is flat screen-free where people can enjoy good beers and conversation took off.

To Varnum, whether it’s a home brewer going commercial or a producer with a script, the process of advising clients is much the same.

“I sit with an entrepreneur who’s in the weeds on the newest business and we’re talking about how to protect their content and how to build up this venture and it’s just almost the same conversation I’m having with the filmmaker saying ‘I’ve got an idea for a film; how do I build it up and how do I find money and how do I go convince the world that they want to consume what I’m producing?’” Varnum said.

“I mean, we’re dealing with creative, passionate people who are fighting an uphill battle and know it,” he added.

“From the micro budget – ‘I’ve got a credit card and I can buy pizza for some people to come and act in my film this weekend’ – all the way up to the $5 million-plus or minus independent project, that’s where I feel like in North Carolina we have a strong suit as far as services being provided on the ground,” Varnum said, while acknowledging that blockbuster, Iron Man-type projects have disappeared with the state’s film tax credits.

The issue is back before the state legislature this year as a result of a bill sponsored by Sen. Harper Peterson to reinstate some credits.

“I’d like to see that happen. I’m not holding my breath,” Varnum said.

Varnum’s work in the film and TV industry is part of a larger practice in entertainment law that has gained Brooks Pierce national recognition.

“Many entertainment firms are boutique. We have entertainment and media expertise, plus we have the ability to provide full services” including corporate, intellectual property, regulatory, tax and litigation, Ramsey said in an email.

Varnum and Ramsey sometimes hit the road, appearing at industry conferences such as CD Baby’s DIY Musician Conference for independent artists, where Brooks Pierce provides on-site legal consultations and distributes copies of the Musician’s Legal Handbook, a 40-page overview of music law produced by the firm.

The firm also hosts a music and entertainment blog (djcounsel.com), posting articles on topics such as copyright law and performance royalties, and it offers a separate Music Law 101 series to the more than 4 million followers who visit Reverb- Nation’s music blog.

In Wilmington, Brooks Pierce remains a key supporter of the annual Cucalorus Film Festival. While Varnum is stepping down after three years as chairman of the event’s board of directors, he will remain on the board.

Throughout each year, Varnum continues to handle a stream of complaints about social media.

“I mean, on a weekly or monthly basis, I’ll have either a current client or a prospective client who calls me because of either some kind of negative statements on social media or someone posted a photo that they own … ‘I don’t like what this person said about me’ or ‘We need to stop them,’” he explained.

With regard to two controversial issues – whether and how to police social media content and the degree of compensation available to performing artists whose work is downloaded or is reworked by others – the law will continue to slowly evolve, Varnum said.

Regardless of those outcomes, Varnum’s clients in the entertainment industry will remain passionate and driven, just as he says he will as a newfound entrepreneur.

Of the team at Mad Mole Brewing, he said, “We just released a Belgian dark strong that they brewed with blackberries that is really good.”