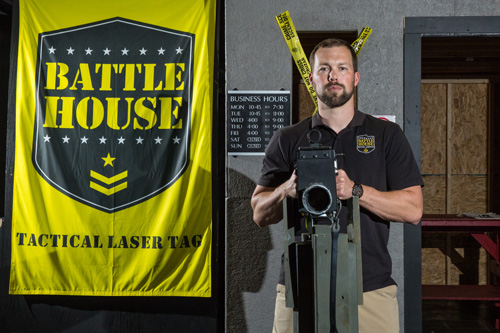 Darek Huckbody, owner | Year Founded: 2015 | No. of Employees: 2, 15 in summer (Photo by Chris Brehmer)
Sometimes the right elements converge to create an ideal opportunity to start a business.

That’s what happened to Darek Huckbody, a former Black Hawk helicopter pilot who, after leaving the military, was flying a helicopter for the Wilmington Police Department.

Working primarily at night, Huckbody found the schedule didn’t give him the family time he wanted, especially with a new baby at home. So he was keeping his eyes open for other possibilities.

A few years ago he attended a family bachelor party in Milwaukee, Wisconsin, at a tactical laser tag facility. Huckbody’s father was impressed, and saw an opportunity that would enable him to change careers. He began researching laser tag possibilities in his hometown in the Chicago area.

“It took him three-and-a-half years to get started, but when it opened, we saw that everybody had fun – all ages,” Huckbody said. “I decided to bring the concept here.”

He took his father’s model, scaled it down and searched for just the right facility, a warehouse-like structure that had easy access from major highways and plenty of parking.

He found that location in a former AAIPharma building on property at the Wilmington International Airport and turned the spacious, gutted interior into an urban war zone, complete with second-story facades and interior staircases.

Groups playing laser tag at Battle House are divided into two teams, armed with metal laser guns and given their “mission,” which is the plot they are acting out in their combat. Some features of the landscape can be rearranged depending on the mission. In the 18 months that Battle House has been open, more than 22,000 people have come to play tactical laser tag, more customers than Huckbody projected.

“We’ve literally had ages 7 to 84 play out here,” Huckbody said. “Several corporations and the sheriff’s office have used us for team building. We’ve talked with fire departments and Marines about scheduling events here. We continue to improve the experience for people. We did a zombie- themed event, and we’re looking at doing Halloween and Star Wars themes.”

Huckbody and his father are also planning to expand, and that means understanding how to replicate the business successfully. Huckbody’s uncle is opening a Battle House in Green Bay, Wisconsin, which will provide a mid-sized city model to compare with the elder Huckbody’s Chicago facility and Darek Huckbody’s Wilmington facility.

Huckbody’s dad is on track to open a second Battle House in the Chicago area, this one financed with an SBA loan through Live Oak Bank. Huckbody himself is doing preliminary planning and research for a second North Carolina location.

Battle House’s growth so far has been done through licensing agreements among the family members. But after fielding inquiries from parties interested in opening a Battle House operation, the Huckbodys are exploring the possibility of franchising.