Courting The Federal Government As Customers 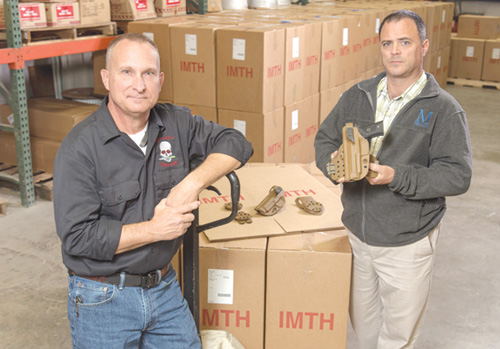 The rewards of digesting those regulations and following them meticulously, however, are potentially significant.

“We take enormous pride in what we do,” said Scott Harry, a founder of Military Hardware LLC, a Wilmington company that sells military and law enforcement gear to the Department of Defense, Department of Homeland Security and federal intelligence agencies.

Harry, who sold the company to Richard Cover in 2012 but remains as a consultant, started Military Hardware in 2006 when he saw it would be difficult for his existing business, Bruce Watkins Supply, to serve both commercial and government clients.

“I got the GSA [General Services Administration] schedule and realized there were some difficulties in selling to the government,” he said. “The code is massive and complex. I realized I needed a separate entity that did nothing but sell to the government.”

Ten years later, Military Hardware counts the federal government as its primary customer, although the company also sells to local law enforcement agencies and to the public.

Military Hardware recently landed a five-year, $52 million contract to supply a holster made by a Jacksonville company.

Finding a distinctive niche in the market is key to becoming a successful federal vendor, Harry emphasized.

“Some things they do in-house; some things they buy from required sole sources,” he said. “Some unscrupulous consultants can help you get a GSA contract, but you find out later there’s no government need for what you offer. So first you have to do your research to find out if there’s a market.”

Developing an attractive set of competencies has been key to WB Brawley Co.’s success in selling to the federal government – notably to military bases.

The company’s founder, Bruce Brawley, established his engineering enterprise in 1992 with an eye to government work and located it in Wilmington because of its proximity to a variety of military installations.

He pursued contracts in the furniture, fixtures and equipment (FF&E) niche within the larger morale, welfare and recreation (MWR) area, according to WB Brawley’s current owner, Chris Nesselroade. Those projects included guest lodging and park facilities on military bases.

The company also decided to go after nonappropriated fund (NAF) projects, rather than projects that had to await funds appropriated by Congress. NAF projects are paid for by revenues from the golf courses, recreation centers, cabins and other lodgings that needed updates.

“One of the advantages of NAF, we initially decided, was that the end user could negotiate work with [the potential contractor],” Nesselroade said. “It was not just a low-bid process. You found a customer who trusted you and you negotiated the work.”

According to Nesselroade, in the company’s first 19 to 20 years in business, NAF projects accounted for about 90 percent of its work. Then, several years ago, the contractor began competing for appropriated fund jobs in an effort to diversify.

Like Harry, Nesselroade emphasized that an aspiring government contractor must be willing to do the required research and to navigate the sometimes tortuous processes involved in meeting government requirements, which can change frequently.

“It’s definitely constant change,” he said. “Understanding government regulations is a must, to stay ahead of what’s coming next. If you are not in tune with what’s going on with the federal government, your company could quickly be out of it.”

Both businesses have found the N.C. Military Business Center, based in Fayetteville, to be a source of help in getting established as a government contractor.

The N.C. Military Business Center also collects data – lots of it – about which government entities need what, and can match interested companies with likely customers, according to Paulanne Page, a federal and military contracting specialist with the center.

“Our primary goal is to [help] North Carolina viable companies that want to do business with the federal government,” she said. “We provide support, education and training for them, including helping them prepare documents and understand the process, both pre- and post-[contract] award.”

Sometimes a business relationship with the federal government is more like a partnership. Such is the case with Cape Fear Tutoring Inc., a nonprofit organization in Wilmington that feeds both the minds and bodies of at-risk children and adults.

When she established her organization in 1984, Kathy Dikeman wanted to help poor children academically, but realized that without adequate nutrition, they would struggle to learn. So for more than 30 years, Cape Fear Tutoring has worked with the U.S. Department of Agriculture through its Child and Adult Care Food Program grants.

With a staff of about 30, the nonprofit has expanded its clientele within North Carolina to about 1,000 programs.

The USDA also helps Dikeman and her staff identify licensed day care and after-school programs in North Carolina that could benefit from their service.

Because nutrition standards change frequently, Cape Fear Tutoring must monitor the meals served by its clients to ensure they meet those standards. The organization also must keep track of each client’s numbers, since it disburses grant funds to its client programs based on the number of meals served each month.

That’s a considerable amount of paperwork and oversight, and the USDA contracts are good for only 12 months, so Cape Fear Tutoring must reapply each year for its grant and prove its worthiness.

“There is a manual with regulations for every federally funded program, but there is no how-to manual,” Dikeman said. “We are constantly looking at our policies and procedures. We sit down with an adviser and say, ‘How can we comply?’ Regulations are constantly changing, and auditing will catch unauthorized changes [on the grantee’s part].”