Schools Get Assist From Business Partnerships 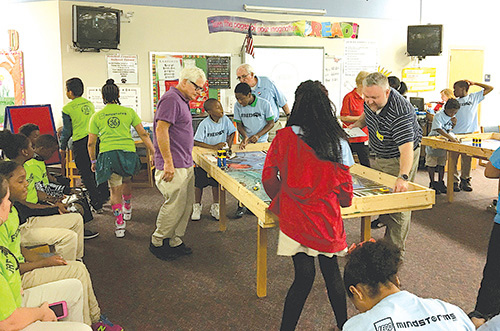 GE-Hitachi employees visit Rachel Freeman School of Engineering at the end of the last school year. (Photo courtesy of GE-Hitachi)

With the start of a new school year around the corner – at least for the majority of the ones in the district on a traditional calendar – many students returning to classrooms Aug. 29 at some point will benefit from the outreach efforts of local businesses.

Long-term commitments are especially important to the schools, said Valita Quattlebaum, chief communications officer for the school system. Volunteering in the schools and mentoring students can have a lasting effect on their success. Because some children don’t have a stable home life, they learn from the mentor how to make good choices, to stay focused and on track.

“GE has been one of our strongest supporters,” Quattlebaum said.

“I like getting involved with schools because I taught, and I know it’s difficult for teachers,” Beatty said. “The hands-on and conversations let [students] know you can really use these skills in the workplace.”

Beatty’s path to a degree in industrial engineering stems from such community participation. At an event in her school, women and minorities were encouraged to enter fields focused on math and science. Now she does the same at school events in New Hanover, Pender, Brunswick and east Columbus counties.

GE-Hitachi’s contributions include more than 700 hours so far in 2016, according to company spokesman Jon Allen. In 2015 GE Wilmington employees contributed more than 1,100 volunteer hours to education. Managed by a volunteer council which publicizes opportunities, the company encourages employees to participate in the community.

In schools such as Rachel Freeman School of Engineering, GE employees were involved in STEM (science, technology, engineering and math) projects, and at Virgo Preparatory Academy they participated in a career fair, science week and talked with students about STEM, Beatty said. Be Healthy Family Night, tutoring and engineer week were also on the list of their involvement with students and families.

While most of those hours were spent in the schools, the company also interacts with students at events such as Science Olympiad, Girls in Technology and LEGO robotics programs. In 2014, the company’s Work on Wilmington project was at Wrightsboro Elementary where volunteers offered physical help in the form of painting, helping build an outdoor stage, landscaping and building a greenhouse, Allen said.

Beatty described one hands-on activity at the schools of putting a Mentos candy in a soft drink to create a bubbling effect that simulates a boiling water reactor. By the end, the students are inquisitive.

“Most of the time they’re asking questions that are getting us thinking as well,” Beatty said. “I tell students to find a mentor so you can make sure you really like that [work]. When you enjoy doing it, it’s not so much like work.”

“Parents can come in to use the computers, do laundry, cook, receive additional resources such as job search assistance in conjunction with the Blue Ribbon Commission,” she said, adding that the company also donated funding for student uniforms and a project to enhance the media center. “We also have other enrichment providers who come in on Fridays to help with numerous skills, including karate, soccer, dance, gardening and moviemaking. The N.C. Holiday Flotilla helps with our STEM initiative. And Junior League provides other assistance.”

Community support from small businesses to large corporations is making a difference, said school officials. The businesses contact specific schools they are willing to help or take grant proposals from the school.

According to information from New Hanover County Schools, assistance in the form of tutoring, funding, food, school supplies, admission to events, funding special instruction or funding sporting endeavors are a few of the ways businesses participate.

“The kids come to depend on it … The student puts trust in you and is looking for you,” Quattlebaum said.

Just to name a few, Landfall Foundation, for example, has donated money toward the purchase of uniforms for low-income students, Equipment for a Healthy Lifestyle program, Helping Hands program, Step Up to the MIC (mock interview center) and Poverty to College Pathway – a visitation project – among its many contributions.

Toyota of Wilmington provides a car for the school system’s teacher of the year to drive for one year – a great morale booster, said school officials.

Faith-based groups such as Grace United Methodist, First Baptist and Lifepoint churches provided time and money for the needs of children and staff in the form of meals, snacks, Christmas gifts and prayer partners.

Those efforts are what Glen Locklear, principal of J.C. Roe Center, is hoping for when his school opens for the first time this school year. The center takes children who have been suspended from school, and they may spend a few days to an entire school year there. Community organizations are involved, but business partnerships could change the lives of these students.

“We have no PTA, and we have a transient population – some here a few days, some longer,” Locklear said. “We don’t have the support some schools have. People want to give the label, ‘That’s where the bad kids are.’ But if we don’t redirect those kids now, their problems can become a problem for everybody in the community, involving crime and drugs.

“For us to have businesses that want to help intervene, it can make a difference in these kids. We want the opportunity to offer incentives for positive behavior and how they deal with situations and emotions.”

Many of the children at the Roe Center do not have the skills to handle emotions such as anger, sadness or frustration properly. Locklear wants to teach them the social and coping skills to deal with life. The center has a point system that rewards progress. Being able to pair good behavior with positive outcomes, such as a pizza party on Friday or a kickball game would be helpful for these students, he said.

“We don’t have art or music,” Locklear noted. “Being able to buy supplies to do art or music therapy or intramural sports would be great, to give the kids a positive attitude. Some think those kids don’t want to do art or yoga, but they may have never experienced it.

“People have told me that teaching yoga to at-risk kids has worked wonders. Most of the kids who end up in our building lack resources; they live in poverty and don’t have parent support.”

School officials say these business partnerships can change a child’s life, and participants seem to get that.

“It’s the price I pay to live here on Earth,” Beatty said. “If you don’t put something in you can’t get anything out.”