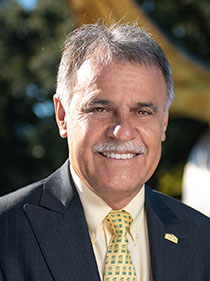 UNCW’s chancellor announced his retirement Friday after more than six years at the helm.

In a letter to students, faculty and staff, Chancellor Jose Sartarelli wrote, "Every fall, when a new academic year begins, I look back on all that we have accomplished together and ahead to all that we have yet to achieve. This year, when I reflected on my earliest days at the university, beginning July 1, 2015, and glanced ahead to next fall, when UNCW will celebrate its 75th anniversary, I realized that the timing is right for the leadership of this great university to transition from me to a new chancellor."

He said in a news release that announcing now will give the UNCW Board of Trustees, UNC System President Peter Hans and the UNC System Board of Governors about nine months to conduct a national search for the next chancellor.

When Sartarelli took the top post, he was preceded by William Sederburg, who had served as interim chancellor after Gary Miller resigned from the job in 2014.

In his first year, Sartarelli led the development of a five-year strategic plan for the school, expanding enrollment and degree programs during his tenure as well as applying his background in business to the university's direction.

The school has set records for annual student enrollment numbers, surpassing 18,000 students this year, the largest student body in the university’s 74-year history.

Also under his leadership, UNCW has set records in graduation rates and philanthropic giving, among other milestones.

Sartarelli’s UNCW career has not been without its problems and controversies, on top of coping with a global pandemic.

In June 2020, as the Black Lives Matter movement gained momentum locally and across the U.S. in the wake of the slaying of George Floyd, UNCW students were taken aback by an “all lives matter” statement made by the chancellor during a town hall meeting.

A petition called for his resignation or removal, and in December last year, the UNCW Faculty Senate voted to censure him. But that action was followed a couple of days later by a UNCW Board of Trustees approving a resolution expressing confidence in the chancellor.

This week, he faced criticism from former UNCW Board of Trustees member Woody White, a Wilmington attorney who resigned from the board Wednesday, saying he feels the university "punishes conservative voices."

Of that time, Board of Trustees Chair Gidgit Kidd said in a Friday news release, “When Hurricane Florence significantly damaged Dobo Hall, our main science building, he and his leadership team used the renovation funds to reconfigure the building, upgrading the roofing and drainage systems to withstand more powerful storms in the future and installing state-of-the-art labs while maintaining the much-loved character of a nearly 30-year-old campus landmark.

"The chancellor has inspired the UNCW community to pursue excellence at every level, and the Board of Trustees is very grateful for his service.”

Before leading UNCW, Sartarelli worked at West Virginia University as chief global officer and Milan Puskar Dean of the College of Business and Economics. He had spent three decades in international marketing and management with three global pharmaceutical companies – Eli Lilly and Company, Bristol Myers Squibb and Johnson & Johnson.

“What an exciting experience this has been for me and my wife Kathy, and my service to UNCW isn’t finished yet,” Sartarelli said in the release. “There’s more to be done this year, and I am eager to be a part of helping our great university continue to focus on achieving excellence in everything we do.