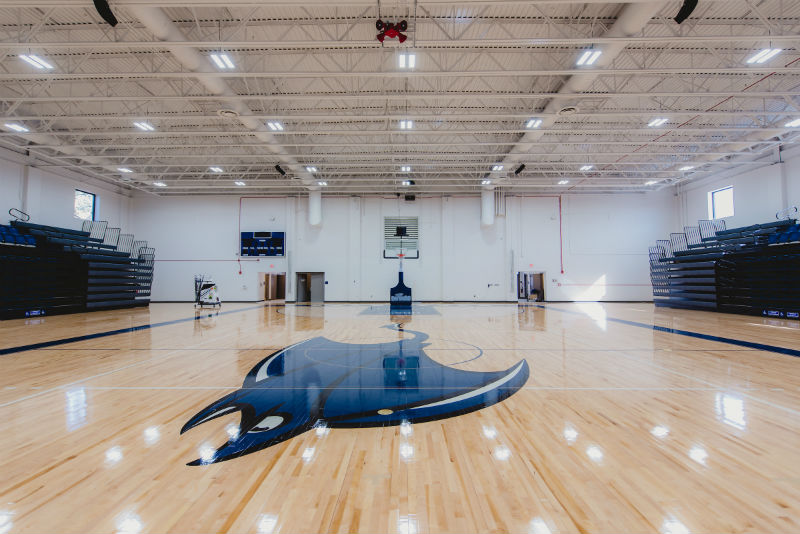 CFCC's Schwartz Center reopened Wednesday after more than a year of renovations. The center will be used to host athletic events. (Photo courtesy of CFCC)
With Cape Fear Community College’s Schwartz Center reopening this week, the school will focus on hosting athletic events in the new space and will no longer rent out space for non-sports related events, college representatives said Thursday.

CFCC officials have decided to use the renovated center for collegiate sports events and to host tournaments, said Sonya Johnson, director of marketing and communications at CFCC.

The Schwartz Center reopened Wednesday with a ribbon cutting and basketball game after more than a year of renovations.

Through the project, the 23,000-square-foot facility at 610 N. Front St. had 6,000 square feet of additions including a multi-purpose team room for study, film review and events, according to the CFCC website.

The building also had its roof replaced and exterior landscaping improved.

Some non-college events that used to take place at the Schwartz Center include the Coastal Living Show and Cape Fear Habitat ReStore’s Upscale Resale and Design Challenge.

The Cape Fear Roller Girls team also used to hold practices at the Schwartz Center but moved to Jellybeans during repairs. Now that Jellybeans has closed, the team partnered with the Edge Soccer Programs to use its facility on Ogden Business Lane for the 2019 roller derby season, said Jannah Geric, marketing director for the Cape Fear Roller Girls.

The Wilson Center is another downtown Wilmington venue owned by CFCC that has been hosting musicians, comedians and performers. The college also rents out spaces at the Union Station for events such as conventions, business meetings and fundraisers.