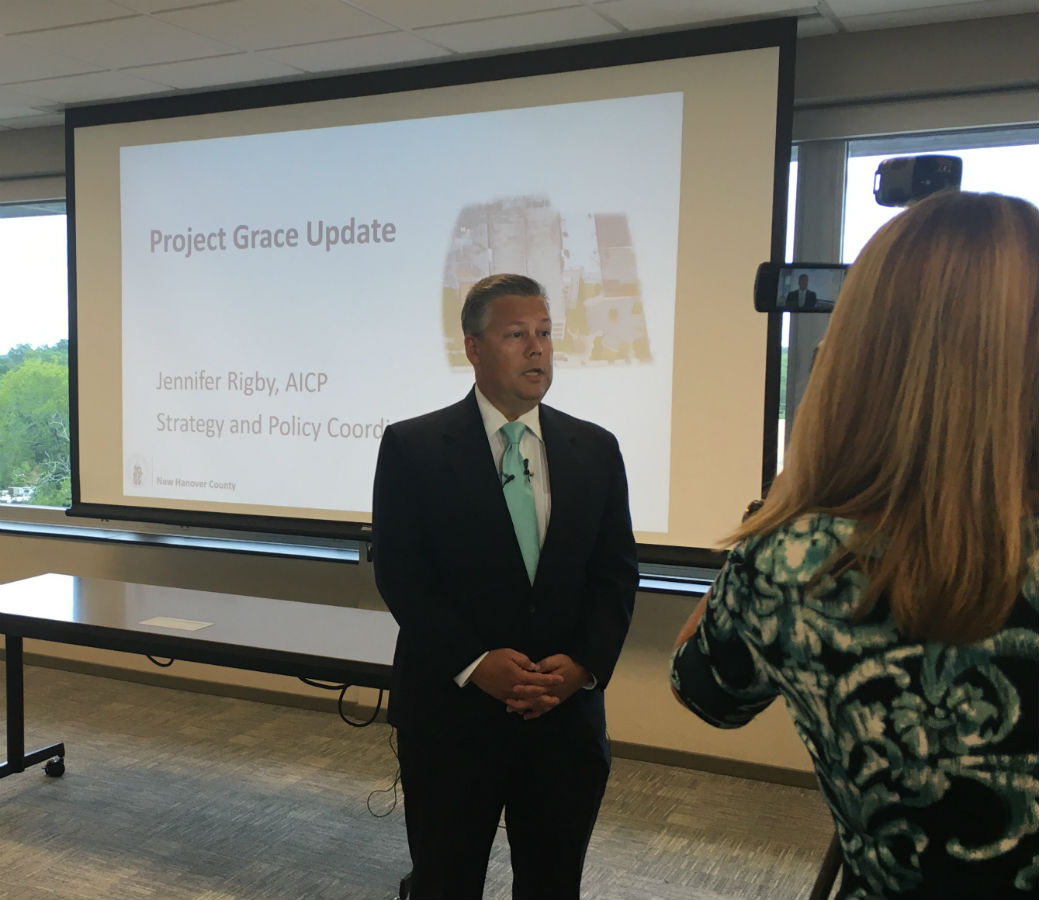 County Manager Chris Coudriet answers questions Monday about Project Grace, which includes the potential redevelopment of a county-owned block in downtown Wilmington. (Photo by Cece Nunn)
New Hanover County officials shared four potential redevelopment scenarios Monday for a downtown Wilmington block the county owns, including one that would create the tallest building downtown and another that would relocate the Cape Fear Museum from Market Street.

All of the scenarios would add apartments, condominiums, hotel rooms, offices and retail space to the high-profile downtown Wilmington block bordered by North Third, Chestnut, North Second and Grace streets. They also all would leave the parking deck at the site, along with the main branch of the New Hanover County Public Library on Chestnut Street in its existing format or a smaller version.

In what would be a public-private partnership, the projected private construction cost estimates included in the redevelopment scenarios Monday range from $76 million to more than $120 million.

“Urban renewal is occurring throughout the country in many major downtowns, and Wilmington is no exception,” said Jennifer Rigby, strategy and policy coordinator for New Hanover County, who has been spearheading Project Grace, the county’s name for the potential redevelopment project. “New Hanover County is in the unique position of owning an entire block of downtown property in a prime location. We have discovered that this unique asset is no longer providing the maximum value to our citizens and so this study is designed to share with the community how the maximum value could be accomplished.”

Commissioners in January approved a contract with Wilmington Downtown Inc. and Benchmark Planning of Charlotte to create the study, site analysis and potential redevelopment scenarios.

In the first scenario presented by Rigby at a media session Monday morning, two six-story buildings would be built on Grace Street that would include retail space, condominiums and a hotel, while a 45,000-square-foot modern library would be built on Chestnut Street. It’s the only scenario in which the maximum development potential identified by the study -- 400 dwelling units (apartments or condos), 25,000 square feet of retail, 45,000 to 75,000 square feet of office space and 100 hotel rooms -- would not be achieved.

The second potential configuration would add a five-story retail/hotel building, a 12-story retail/office/condominium complex and a nine-story apartment building that would include a 40,000-square-foot, one-story modern library.

Only one of the potential redevelopments, Scenario 3, leaves the library and Story Park, which replaced the older park next to the library and opened in October, as they currently exist. That scenario also places a 15-story hotel and condominium complex, what would be the tallest building in downtown Wilmington, next to a 14-story retail, apartment and office building on Grace Street. That potential redevelopment would also require a rezoning from the city of Wilmington for those heights to be allowed.

A fourth possibility would put the main branch of the library and Cape Fear Museum, currently at 814 Market St., in a modern 80,000-square-foot building on Chestnut Street.

“The analysis presented to opportunity to potentially co-locate what is not a new finding for the county – that there needs to be investments in the museum from a capital perspective, and so it begs the questions, do we do it where it is, which is an outstanding site, or do we take this opportunity and co-locate,” said County Manager Christ Coudriet as he answered questions from the media Monday morning. “The museum as an entity, the museum advisory board, is prepared to go forward with either scenario – stay where it is or co-locating with the library --- but we do need to make an investment in the museum itself.”

The county costs included in the analysis would be as a result of constructing a new main branch of the library or a new library/Cape Fear Museum.

"We would factor those costs into our capital plan and use any number of financing tools that we look at now, whether it's limited obligation bonds or some other debt instrument," Coudriet said, when asked where the funding for the potential library and/or museum changes would come from. "We would ask the finance office to determine what is the right financial model for that."

Rigby said the Board of Commissioners won’t take action on the potential redevelopment ideas at its meeting today, which was set to begin 4 p.m. with a more in-depth explanation of Benchmark Planning’s and WDI’s findings.

“We will ask our commissioners to make a policy direction in September, so no action will be taken this evening. It will just be presented to them and then we’ll ask for a determination in September,” Rigby said earlier Monday.

In an estimated project timeline, if the New Hanover County Board of Commissioners chooses one of the scenarios in September and the county issues a request for proposals from developers in January next year, officials could be on track to choose a developer in June 2018 and construction could begin by the summer of 2019.