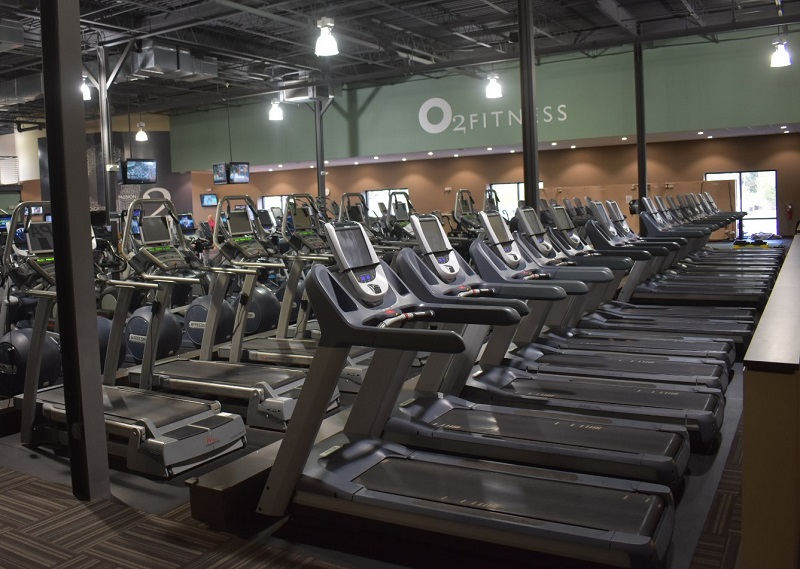 O2 Fitness in Hanover Center in Wilmington has been empty because of state restrictions amid the COVID-19 pandemic. (Photo courtesy of O2 Fitness)
For many gym owners and operators across North Carolina, the state-mandated closure of fitness centers is becoming a costly one.

Gov. Roy Cooper announced Wednesday afternoon that the state will continue in phase two of its economic reopening plan for another three weeks. That means gym facilities would have to remain closed until the order is re-evaluated again in July.

The governor cited the growing COVID-19 cases across the state as the reasoning for the new orders.

“The virus is still prevalent in our state,” said DHHS secretary Mandy Cohen during the news conference Wednesday.

In another mandate, the governor is requiring face coverings in public, including customers and employees of retail establishments and restaurants, as well as at manufacturing operations.

But the N.C. House on Wednesday was slated to take a vote to override Cooper’s veto of House Bill 594, an act to authorize indoor or outdoor exercise and fitness facilities, gyms, health clubs and fitness centers to resume operations while also safeguarding the public health to prevent the spread of COVID-19.

The bill was expected to hit the legislative floor Wednesday afternoon. The legislation would also allow certain existing establishments to offer and operate outdoor dining and beverage service options.

Cooper had vetoed the bill Friday, stating, “Tying the hands of public health officials in times of pandemic is dangerous, especially when case counts and hospitalizations are rising.”

A coalition of gym industry leaders working to get North Carolina’s health club members exercising at their facilities again has been working to address health and safety issues of opening such facilities and ease concerns of state public health officials.

The group, Fitness Operators for a Responsible Reopening (FORR), has helped develop a 14-step plan for the reopening of fitness facilities.

“Today, North Carolina lawmakers have an opportunity to join 47 other states to safely reopen gyms and save jobs by overriding Governor Cooper’s veto of HB 594," FORR officials said in an release Wednesday. "We call on members of the General Assembly to stand with the 985 fitness facilities, 45,000 hard-working employees and 2.5 million fitness club members in North Carolina to safely and quickly reopen gyms.”

Gyms were ordered to close in March, among a number of other businesses, such as bars, which also remain closed.

Some gyms in the Wilmington area, however, have opened this month using privacy laws and a letter from the state attorney general’s office that says they’re allowed to be used "when that use is prescribed by or directed by a medical professional.”

Meanwhile, some chains, such as Planet Fitness and O2 Fitness, have decided to keep doors closed as they evaluate plans and await guidance from the governor’s office.

Joe Bernardini, a partner in the group that owns the Planet Fitness in Ogden, said he was disappointed with the governor's veto of the bill.

"I was upset; at the end of the day it stinks that we can't open, but I understand his reasoning behind it," Bernardini said. "I kind of expected it to be honest ... I didn't get my hopes up because you know numbers are increasing throughout the state."

Planet Fitness in Ogden, while closed for now, is ready to go when restrictions lift, he said.

"Our corporate office has a 150-page playbook/manual that instructs us exactly how to open," he said. "There's a lot of data, a lot of information from other clubs opening up across the country that ... we feel like we're going to do a good job of handling the situation."

North Carolina is one of only a few states that don’t have a full mandate to have health clubs open, he said. That's a statistic reiterated by the FORR group.

“I think this is a critical week for the governor and how he views health and fitness in the state of North Carolina. He has a chance to announce an executive order under his terms that would allow all of gyms to open safely and responsibly. And we are urging him to do that,” said Doug Warf, a member of FORR and president of MDO Holdings, which owns O2 Fitness and a number of other companies.

O2 Fitness has 17 gyms in North Carolina, with four of those in the Wilmington area.

“It’s a little shocking to us that we’re at this point because we haven’t had the issues that [other] states have,” Warf said.

“We are four of the larger providers in the state … and what we did is, we came up with a 14-step, 53-point plan that was based in science and also in practice because all four of us have locations open outside North Carolina. And we presented that to the governor, to DHHS, and to really anybody who would listen, senators, house representatives and different members of the legislature," Warf said. "And [we] tried to get traction wherever we could as we were kind of abruptly pulled out of phase two.”

“And throughout phase two we've had conversations, but some of those conversations have been more us suggesting things, and very little conversation back with us  . . . especially from the governor's office and DHHS," he said.

The group created a website for a number of items with training videos, resource guides and “things we thought could help everybody open safely, not just large gyms. We wanted to make sure we were helping the individual gym, whether it would be in Wilmington or Asheville.”

“We feel like we've kind of done everything possible. We've shared our science and data. We've yet to really see the science behind why we remain on the outside looking in. But we hope that we can rectify that this week,” Warf said.

The situation has taken a big toll, he said.

"We went from 1,400 employees to roughly 55 in the month of March. . . We have close to 50,000 members in the state of North Carolina alone. We have close to 12,000 members in Wilmington," Warf said. "And it's hard because this is not only something we care about but our members care deeply about it. And in a time of high stress, high anxiety, fitness is an outlet for both physical and mental health for all of our members."

There are five O2 gyms open in Charleston, South Carolina, by comparison, he said. And among those five gyms, the fitness group is at just over 32,000 member check-ins in the 35 days the facilities have been open with no COVID-19 incidents, he said.

"So we know that our plan works. The social distancing that we practice on the gym floor is something that we take seriously. But it's also a two-way commitment between the members and the club," Warf said. "We worried about that. Naturally, anybody would when you come back, but we have been overwhelmed by how seriously the members take it."