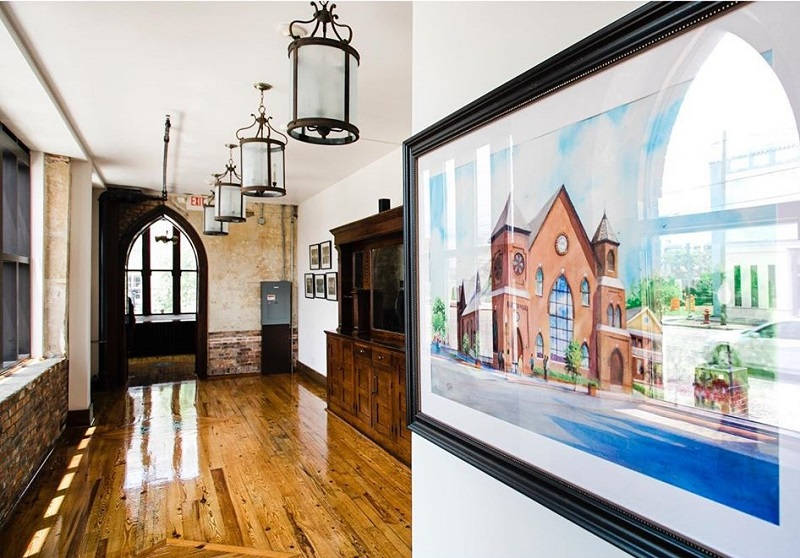 The Brooklyn Arts Center has been undergoing major work to the venue since it closed to the public in March. (Photo courtesy of Brooklyn Arts Center)
At least one local event venue has made use of the time it's been closed because of the COVID-19 pandemic to make changes. Meanwhile, some events are starting to roll out in some unique ways in the Wilmington area.

The Brooklyn Arts Center, which is still closed to major events, has been undergoing an overhaul of the facility at 516 N. Fourth St. in Wilmington, said Rich Leder, the center's executive director.

“Following Gov. [Roy] Cooper’s executive order, the Brooklyn Arts Center has taken the time to finish projects that we could otherwise never have done because we never had the time before," Leder said. "We have reconstructed and made the place far more beautiful then I think it’s ever been.”

The entire venue has been repainted, the Annex Bridal Suite at the Brooklyn Arts Center has been refurnished and new lighting has been put in, he said.

“We have been working nonstop every day since the middle of March," Leder said. “That’s three full months of basically construction and refurbishment.”

Every weekend of the year is booked at the Brooklyn Arts Center, he said. So the venue will be ready to proceed with its calendar the first weekend statewide restrictions limiting gatherings are lifted. That's assuming that an event was not already rescheduled, many of which were in July, he said.

That's because restrictions on certain businesses and the number of people gathering in a group indoors and outdoors are still in place during phase two of the state economic reopening plan. That second phase is slated to run through at least June 26, but is subject to change.

“We're hoping for a favorable report by the governor so that we can begin hosting weddings and concerts, our big community marketplace events, and corporate events and fundraisers, and back to doing all the big things that we normally do, which we are prohibited from doing because of the executive order outlining and detailing phase two,” Leder said.

Many indoor and outdoor events have been impacted by the restrictions that are in place to stop the spread of the new coronavirus. Gatherings indoors are limited to 10 people, while outdoors they're limited to 25 people.

Many road races since the pandemic have been virtual. Go Time, however, recently announced it's hosting an in-person race in the Wilmington area.

The Battle For Independence Road Race, taking place with an in-person race event on July 4 at The Pointe at Barclay, also has a virtual option. Go Time, however, is hosting the event with a social distancing and sanitization plan approved by the city of Wilmington, according to the race website.

But while some restrictions are still in place, venues that host large groups like the Wilson Center have come up with some different ways for the show to go on.

The Wilson Center and Cape Fear Community College Foundation have announced the Wilson Center Drive-In Concerts series. The concerts are taking place next week, starting June 25, with a lineup of area performers. The event is serving as a fundraising effort for the CFCC Foundation's Gift of Education initiative this year.

The concert series will be held in the surface parking lot behind the Wilson Center, between Front and Second streets.

"These events will be held in compliance with local and state health guidelines and will be in-car events. There will be limited amplified sound and the concert will be broadcast via short-range FM radio transmission," stated a news release.

And last weekend, the venue hosted the Hot Tub & Swim Spa Blowout Expo. Brady said the convention center was able to host the expo because they essentially “sell under the retail guidelines.”

"All events have to follow the N.C. Governor’s order for mass gatherings, cleaning and sanitizing and social distancing," Brady said in an email. "To accommodate these events the center room sets are done according to the six feet social distancing guidelines and frequent cleaning of high touch point areas, and wearing masks and temperature checks in accordance to CDC recommendations."

In addition, the convention center's AV provider offers Zoom services to accommodate attendees unable to be onsite and to follow the mass gathering guidelines for 10 or less people in a room, she said.

Signage and portable and wall-mounted hand sanitizers are also in place throughout the facility to remind guests and staff about social distancing, hand sanitizing and wearing of masks, she said.

Ray Baca, a co-owner of Warehouse 1856 at 15 S. Water St. and owner of Belle Vue Wilmington at 20 Princess St., two event venues in downtown Wilmington, said he is booking what he calls "minimonies," a smaller gathering that fits within the 10-person limit indoors.

Rotations during the ceremonies are slated to happen within that 10-person limit, he said.

"So instead of canceling, delaying or positioning, since we don't know what the future is going to be like, we decided we're going to host mini-events," Baca said.

The event venues typically host wedding-related events, a big industry for the Wilmington area that not only touches venues but other area vendors.

"So if you think about us as a whole, there's 67,000 weddings in North Carolina every year. Each wedding is about $23,000 to host, and each wedding is on the average of about 100 people," Baca said. "So do the math on how many people that is, and all of those people have to get plane tickets, rent cars and hotels and Airbnbs ... So everything really trickles down to how much money the state is actually losing, because we're closed down. I mean it is a big deal."

And with much of the spring and summer wedding season over, the wedding industry, in general, is already hurting. Baca said between the two venues, there have been about 50 events canceled or postponed.

"We're just trying to make it happen so the brides don't have to completely change their plans," Baca said. "But as a venue owner, it's been ridiculously tough because we don't have any guidance whatsoever. Gov. [Roy] Cooper, he really hasn't given us any -- other than 10 inside and 25 outside -- he's not mentioning the wedding industry, which is a billion-dollar industry in North Carolina."