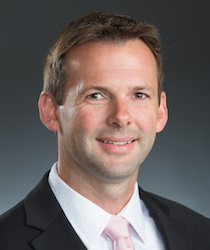 Russ Lopatka
The Corning Inc. plant in Wilmington has a new manager.

Company officials said this week that Russ Lopatka, who has built an eight-year career in Wilmington with the New York-based materials science company, has been tapped to oversee plant operations. He assumed his new role Monday.

Most recently, Lopatka was the regional engineering manager, according to his LinkedIn profile. He began his career with Corning in August 2001 as a process engineer in the Wilmington optical fiber plant.

He has served in other capacities since: notably, as the Wilmington plant’s manufacturing strategy manager and then as its plant engineering manager. He has held other roles in various manufacturing functions in the plant's engineering and operations, officials said Tuesday.

“I will still reside in the Wilmington area and will remain engaged in the community -- continuing on the ... Wilmington Chamber of Commerce Board of Directors and the NC State Industry Expansion Solutions Advisory Board,” Holbrook said in an email Tuesday.

This version of the story corrects to 2001 the start of Lopatka's career with Corning Inc. and adds more information about the positions he has held.