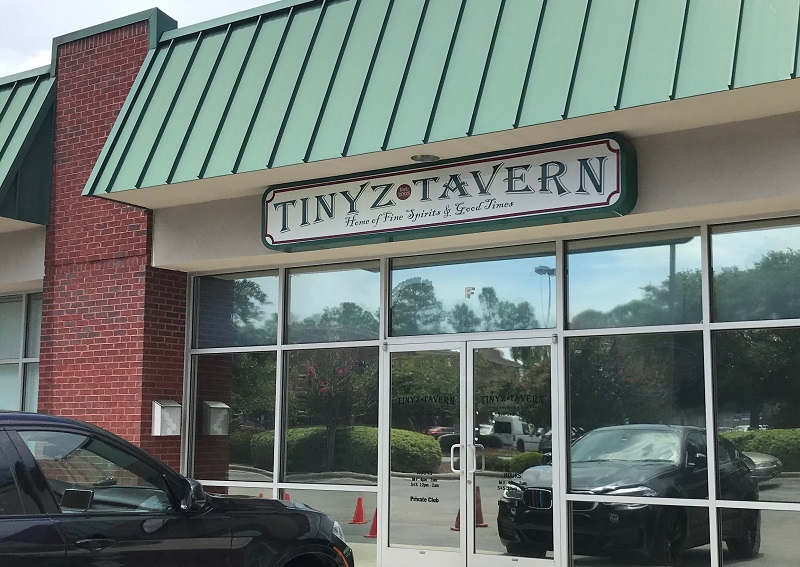 Tinyz Tavern off 17th Street in Wilmington is closed for business during the state's phase two reopening plan. (Photo by Cece Nunn)
For local bar owner Matt Hall, Gov. Roy Cooper's announcement Wednesday to extend the state's economic reopening plan by another five weeks was not the decision he was hoping for.

"Right now we're just looking for a chance to reach some of the state representatives if we could get an opportunity to possibly get compensated in some form or fashion. Whether that happens we don't know," said Hall, co-owner of Tinyz Tavern in Wilmington, on Thursday. "For most, I would imagine at this point the writing's on the wall, and ... I just don't understand."

Hall has two bar locations -- one off 17th Street and another, newer location off Gordon Road. He has been in the bar business with co-owner Jason Ruth for 14 years.

"We're just looking for an equal opportunity to at least, even in the smallest ways, be able to pay some bills," Hall said.

Cooper on Wednesday announced the third extension of phase two as North Carolina prepares for the reopening of schools and universities statewide. That extension means some businesses, including bars, gyms and movie theaters, are under a mandate to remain closed across the state. Restrictions also remain in place that limit large gatherings.

“Other states that lifted restrictions quickly have had to go backward as their hospital capacity ran dangerously low and their cases jumped higher. We will not make that mistake in North Carolina,” Cooper said in a news release. “In keeping with our dimmer switch approach with schools opening, and in order to push for decreasing numbers which will keep people healthier and boost our economy, North Carolina will remain paused in Safer At Home Phase 2 for 5 weeks.”

N.C. Department of Health and Human Services (DHHS) officials said that while some of the state's numbers have mostly leveled, "any progress is fragile as other states have shown with sudden and devastating surges in viral spread," stated the release.

Hall and Ruth want to keep their businesses going, turning to loans to pay their way through the closure. But without knowing how long the bars will remain closed, Hall questioned how far they will have to go in debt to see the business to the other side of this event.

Hall said he thinks there will be bars that go under as their doors remain closed.

The state required businesses to shut down in March as the highly contagious virus began to spread. Since then some of those restrictions were eased, including for restaurants that were allowed to open up dining rooms to limited capacity. For those not included in the easing, the weeks have taken a toll.

"It's just the last straw on the camel's back. I mean if we go all the way to Sept. 11, that will be six months, and not too many businesses that are trying to exist can go six months with all their expenses and no revenue," said Ron Schnell, owner of Cardinal Lanes Shipyard.

The bowling industry has been fighting to open with a lawsuit filed by a bowling membership association that Cardinal Lanes belongs to. The state Supreme Court has temporarily blocked an initial judge's order in early July that allowed bowling alleys to open while it reviews the case, according to news reports.

"It just doesn't make any sense, especially in the case of bowling centers when we are big centers, we can social distance, we can do masks, we can sanitize, we can do anything that a retail establishment or restaurant or anybody that is currently open, we can do all that," Schnell said about the inclusion of bowling alleys.

Doug Warf, president of MDO Holdings, which owns O2 Fitness and a number of other companies, said that he wasn't surprised by the phase two extension but was surprised at the length of the latest plan.

"We feel we have overly demonstrated to the [NC DHHS] team that fitness facilities are not only safe to open but they can safely provide our communities a way to work on their mental and physical health," Warf said in an email. "Studies are coming out each week that show the importance of physical fitness in fighting the Coronavirus and we are crushed that our members are not able to use our clubs to relieve stress and work on their overall physical health."

The groups in FORR also own and operate gyms in other states, he said, adding that "many of these gyms have been open for months using the sanitation protocols we have suggested."

O2 Fitness will continue to work with state and local officials to see if it can help initiate a safe reopening plan for the state while working quickly to formalize state or federal financial support in the next few weeks, Warf said. Meanwhile, fitness teams are working to continue to improve virtual group fitness classes and online training sessions, he said.

Ray Baca, owner of the Belle Vue Wilmington in downtown Wilmington, said he is worried how the state's reopening plan would impact the wedding industry.

While the venue has been hosting what he called, "minimonies," with groups of 10 people or fewer, it's not enough to sustain his business.

Many couples also are switching their nuptials from 2020 to 2021 because of the mass gathering restrictions, resulting in serious revenue losses this year, Baca said.