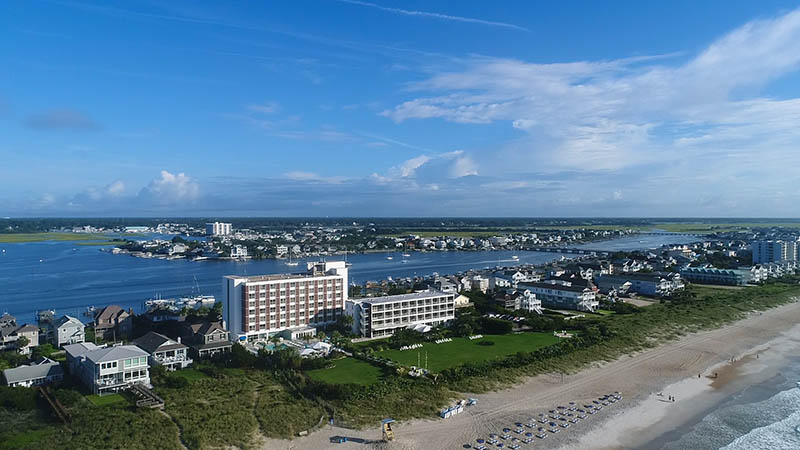 The Blockade Runner Beach Resort is seeing some business-related guests who have been kicked out of offices, one of he many impacts of the spread of the coronavirus. (FIle photo)
The Dolphin Lane Motel in Carolina Beach didn't have any guests arrive Tuesday.

And while that’s normal for a weekday this time of year, the motel's owner David Bowles feared what the weekend will be like with the coronavirus scare and the recent beach closures.

“If we have to go through the whole summer with this … it will crush a lot of people. It’s unprecedented, that’s for sure, at least in my lifetime,” Bowles said. “It’s scary.”

Bowles has owned the motel, located at 318 Carolina Beach Ave. N., for 18 years. He has been in the industry for about 30 years having previously been in the Myrtle Beach market, he said.

Most people so far have kept their Easter season bookings, the next big peak for the tourist market, he said. There have been, however, a few cancellations and a couple of postponements until May or June.

“We have some [bookings] in the beginning of April," Bowles said. "But we will see how that goes, I guess."

Bowles' motel isn't alone, as many hotels and vacation rentals across the region face similar concerns amid the coronavirus pandemic.

Area beach towns have taken several recent initiatives citing public safety measures as a way to combat the spread of COVID-19, a disease caused by the coronavirus.

Surf City has also placed restrictions on short-term rentals, as did the town of Oak Island over the weekend. On Tuesday afternoon, Oak Island also closed its public beach parking lots and accesses.

The impact is creating ripple effects in the hotel and vacation rental market, which has already taken a toll from the slowdown in travel overall due to the virus.

The Wilmington and Beaches Convention and Visitors Bureau (CVB) reached out to beach properties -- hotels and vacation rentals -- this week to find out what impact the closing of the beach strand had on their existing reservations, said Connie Nelson, Wilmington and Beaches CVB communications and public relations director, in an email.

"Overall, the COVID-19 health crisis is already having a huge impact on tourism in New Hanover County, as it is in destinations across the U.S. and abroad, as it is affecting lodging properties, restaurants, retailers, attractions and service providers," Nelson said. "With the uncertainty of the length of time that this crisis will last, we do not yet know the full extent of that impact but we do know that it will be significant."

In the Wilmington CVB's canvass this week of beach hotels, those with flexible cancellation policies reported bookings were steady last week up until the beach strand closure, Nelson said.

“Beach hotels with stricter cancellation policies did not have as many cancellations and encouraged guests to lounge around the pool at safe distances. However, they did not have walk-ins or additional bookings once the beach strand closed,” Nelson said.

One hotel property, she said, reported 30% occupancy prior to the beach strand closing. Once it closed and the maximum number of people allowed at gatherings was reduced, however, cancellations occurred and occupancy fell to single digits, she said.

"Most are also experiencing cancellations for dates in April and May,” she said.

Another property reported that of 193 scheduled arrivals from March 20-April 30, there were 73 still active and 120 canceled, she said, adding that some of those cancellations may eventually reschedule.

The Blockade Runner Beach Resort just came off of a busy college spring break weekend. The resort and lawn area is still open, as well as its restaurant, which is offering take-out, said Scott Relan, the Blockade Runner’s director of marketing.

When the beaches closed this weekend, the resort lawn was a big hit for spring break guests, who found outdoor space to enjoy the weekend weather, he said.

But outside of the normal guests, Relan said the resort is seeing a business crowd.

The Blockade Runner has checked in a lot of business guests in the past 10 days, individuals who are coming to the beach to work, he said.

The resort is offering a $99 weekday rate through the end of March as a way to bring in more business. Having fast Wi-fi and independently air-conditioned rooms with a view is a “nice little perk for someone who is booted out of their office.”

“Moving forward … We’re booking rooms organically from those locked out of offices as a way to get out and still have a way of getting a breath of fresh air,” Relan said.

And while vacation rentals are still in the off-season, there were not as many cancellations in March, Nelson said. Some guests, however, are beginning to call about the status of future stays.

It’s still too soon to know how the current situation will affect summer, Nelson said, adding, “we don’t know how long this will last.”

The remainder of March and April, so far, have had the greatest impact on the rental market.

“Some rental companies are seeing a significant impact to them this past weekend and from a broader standpoint. As much as 90% down for bookings at this time,” Nelson said.

Intracoastal Vacation Rentals is working through the current situation and is advising guests who are wanting to inquire about canceling to please wait until three to four weeks before their scheduled stays, "so that we may help all guests in a timely manner,” Kevin Futral, managing director of vacation rentals, said Tuesday.

“We just don’t know what the [future] situation is going to be like,” he said.

There were still reservations on the books Tuesday that are scheduled to arrive this week and so far, there has been no word on cancellations.

“We are critically monitoring the situation as it unfolds. Each beach is different," Futral said. "While we are seeing beaches to the north and south of us closing rentals, we currently just have our beaches and pier and sand access points closed. People can still come to the rental houses; they just can’t access the beach.”

Each guest, however, is being worked with on a case-by-case basis, he said.

“With this event not being covered by travel insurance, we have been reaching out to the owners and they have been really great working with us,” Futral said.

January, February and the start of March have been strong for its vacation rentals, but could trail off in the coming weeks with the current situation across local beaches, he said.

“We’re monitoring it day-by-bay and we will take the appropriate actions as we find out more information," Futral said. "We just want everybody to stay safe."