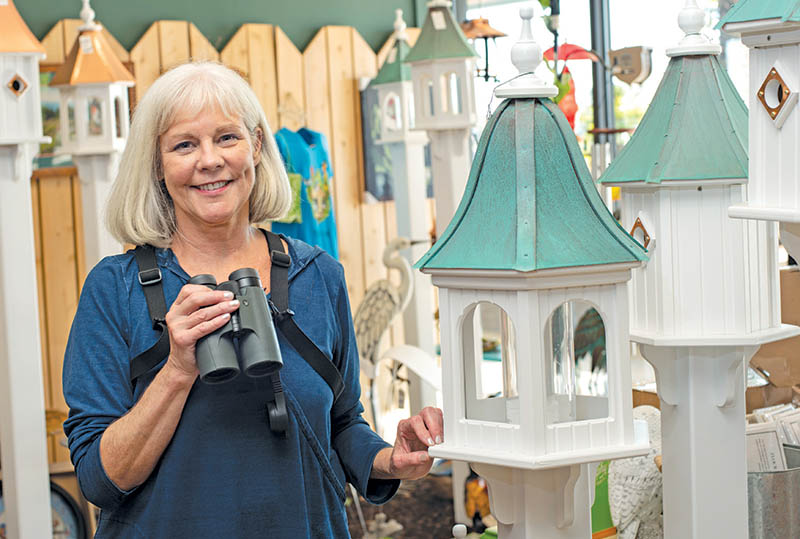 Karen Edwards plans to retire in February, spending time on hobbies such as birdwatching, while keeping a watchful eye on her retirement financial plan. (Photo by Michael Cline Spencer)
Come Feb. 1, her 66th birthday, Karen Edwards will embark upon a new adventure. She won’t report to her lab at New Hanover Regional Medical Center’s Medical Mall. She won’t have a set schedule every day. She will be retired.

“I will definitely miss it,” she said of her work, which she describes as the best nursing job she has ever had. “I love my coworkers, but I feel comfortable leaving.”

Like many prospective retirees, Edwards has several ambitions for this next phase of her life: honing her birding skills, improving her physical fitness and spending more time outdoors, enjoying family and friends.

Edwards is leaving the working world earlier than planned.

“I thought about working longer because my house needed a new fence and a new roof,” she said recently. “But then Florence came along.”

Hurricane damage to both the roof and the fence means that Edwards’ insurance is providing replacements. She changed her plans accordingly.

Edwards believes she has an adequate nest egg to support her in her retirement years as long as she is careful about her spending.

“I am lucky enough to work in a place [NHRMC] that has a pension system, and I’ve been there long enough – 26 years – to build it up. I also have Social Security and some money in a 403(b) [the nonprofit equivalent of a 401(k) investment account]. While I started [saving] late in life, I feel I have enough.”

But many Americans don’t have enough when they are ready to retire. According to a February study from financial services firm Edward Jones, 51 percent of Americans are not actively contributing to an employer- sponsored 401(k) retirement account.

The replacement of many company pension plans with 401(k)s meant that employees could manage their own retirement savings, says John Zachary, a certified financial planner with Wilmington-based Pathfinder Wealth Consulting. But often they don’t, he added. He urges clients who have procrastinated to start saving now, no matter their age.

Savings diversification is one key to success in providing for a financially secure retirement, advisers say. Taking a long view of investments is another.

“One mistake some investors make is not sticking to an investment strategy,” Zachary said. “Some people panic in downturns, which means they withdraw their money and miss out on the upturns.”

They built their careers at Miami University in Ohio: he as an economics professor, she as first a faculty member and then an administrator. For 30-plus years they participated in the Ohio pension system, but each also established a 403(b) account to which they added annually for many years.

They discovered the power of compounding interest in their investment accounts, which they left in the hands of their account manager, and they felt comfortable with the prospects of their pensions in Ohio’s system, which ranks fairly well for continued solvency.

But they learned about the downside of that pension plan.

“We realized, after 15 or 20 years that it didn’t make sense to move to another job,” Christine Noble said, explaining that if she and Nick took positions with another university outside Ohio, they would have to start over in a new system. Their State Teachers Retirement System monies, though available to them at retirement, would not move and grow with them.

Some years later, when both took a class in retirement planning, they learned something else about pensions.

“You can’t adjust [the income you receive from] your pension,” Christine Noble said. “Most of our friends who are living on their 401(k) s can adjust their income, other than their RMD [required minimum distribution]. We didn’t know how critical that can be.”

Like Edwards, the Nobles feel confident that their retirement savings will serve them well in this new chapter of their lives, but they are keeping an eye on their budget. Christine Noble tracks the couple’s spending using personal finance software Quicken.

The Nobles stay as busy as they care to, doing things that interest them. Nick Noble is an accomplished photographer who captures coastal images for his enjoyment but also makes enough money to fund his hobby. Christine Noble makes jewelry but is also preparing to teach some classes at Brunswick Community College.

Having interests that are fulfilling is an important element in successful retirement, Zachary said.

“People need to understand what their retirement is going to look like,” he said. “Some people actually go back to work because they don’t have anything to occupy them. It’s not that you need hobbies, but you do need meaningful activities.”

Part of imagining retirement is deciding where you want to live, Zachary continued. He suggests that people who think they want to move somewhere else should consider trying out a place by renting.

“Tiptoe into it,” he said. “We also advise people against chasing their kids around.”

The Nobles knew they wanted to spend retirement living somewhere on the coast in the Southeast. For 10 years they visited various locations at various times of the year, experiences that helped them shorten their list until, in 2006, they purchased a lot in St. James.

They built there in 2011, a year after retiring. Even though their two children and their families live back in Ohio, the Nobles are happy to visit there but return to their warmer climate home in North Carolina.

Another pitfall that can imperil retirement savings is helping your children financially in generous but often unwise ways, Zachary said, citing the case of one client who invested $50,000 to keep a son’s business solvent. The business was doomed anyway, and the client lost that investment.

There are reasons, however, that retirement plans need to take offspring into consideration.

Phoebe Barr knew she would need to ensure the financial stability of her son, who has a medical condition.

“My daughter will be self-sufficient, whatever she does,” Barr said. “My son can live independently but can’t always make good decisions. I’ve built a trust for him, which was a big driver for me: to provide for him so he does not become homeless or a burden to someone else. He’s working on a career … but his health costs will always be high.”
Barr and her husband lived in Dallas for 35 years. He had a criminal law practice; she taught for 22 years.

She knew that she wanted to retire on the East Coast and eventually identified her destination as Wilmington. She and her husband mapped out their retirement in detail, but when he died in 2011, Barr revised her plans. They had money in a 401(k) and a 403(b) account, which she was determined to maintain. She lived frugally on her teaching salary, working for four more years, paying off the mortgage and settling her husband’s business accounts.

When Barr retired in 2015, the sale of her Dallas home enabled her to purchase two houses here: one for her daughter and son to live in while they are enrolled in college and one for herself.

She has bought long-term health insurance and has started taking income from an annuity but has not touched her investments.

“I am very comfortable as long as I live within my means,” she said. “We were definitely middle class, but I live an advantaged life because I’ve managed it well.”