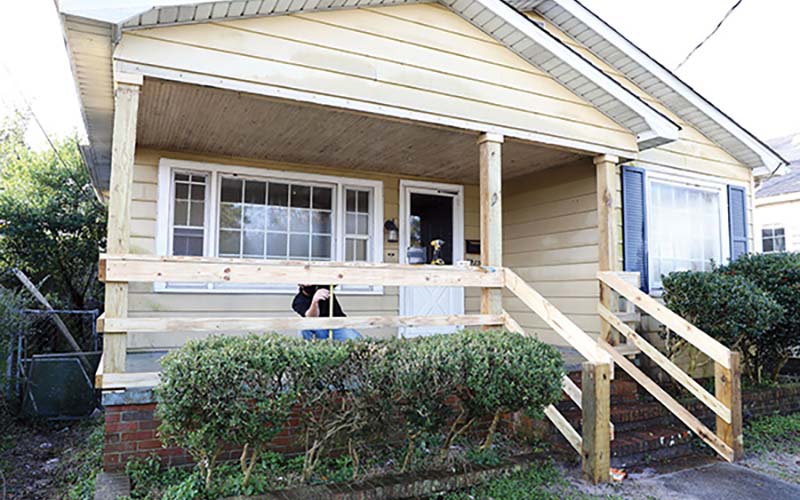 Local rental homes in a portfolio purchased through social impact investing have been under repair.
Local officials and others have taken some steps recently to address the Wilmington area’s affordable housing crisis.

Recent news related to affordable housing includes an advisory group’s housing bond recommendation, a boost in funding for some city of Wilmington programs and some private dollars at work on retaining the current stock of lower-cost housing types.

The City of Wilmington and New Hanover County Workforce Housing Advisory Committee has recommended that officials seek a housing bond referendum. Housing bonds are debt securities issued by governments to raise funds for the development of affordable housing.

Many of North Carolina’s largest cities already have housing bonds. One of the most recent examples is an $80 million housing bond voters in Raleigh approved in November. Of that money, according to a Raleigh News & Observer article, $16 million is going to buy land for future affordable housing, $28 million for public-private partnerships, $24 million for gap financing, $6 million for first-time homebuyers and $6 million for the rehabilitation of homes.

Members of the Wilmington City Council and New Hanover County Board of Commissioners have had recent affordable housing discussions that included the idea of a $50 million housing bond.

Officials have been open to the idea of a bond referendum, said Suzanne Rogers, community development and housing planner for the city and liaison to the housing committee. But county officials would have to vote on whether to move forward with a referendum that would need to be placed on the ballot of an upcoming election.

The vote on going ahead with the bond referendum could happen in April or May, Rogers said. In the end, a housing bond “would ultimately be decided by the voting public,” she said.

Noting the number of cities in the top 10 population-wise in the state (Wilmington is No. 8) that already have a housing bond, Rogers said, “Our peers have shown this to be an effective tool at meeting affordable housing needs.”

One of the next steps for the housing committee will be to inform residents.

“We’re going to be presenting to various groups around town to help them understand what the bond is,” said Paul Stavovy, a member of the committee, who is also executive director of Cape Fear Community Land Trust and runs a construction company. “We want to get ahead of it and start working at the grassroots level to explain why this is so important.”

A housing study presented by the workforce and affordable housing committee this year showed that one in three households in the county pay more than 30% of their gross income for housing, and 46% of renters are doing the same. More than 41% of households in New Hanover earn less than 80% of the area median income of $65,100, according to the study.

Affordable/workforce housing is being addressed through additional funding allocations.

In the city of Wilmington, as an example, about $900,000 was added in its budget this fiscal year to the following two programs:

•The Homeownership Opportunity Program, which offers working families an opportunity to own a house without becoming cost burdened by lowering mortgage payments through down payment assistance and 0% interest rates;

• The Rental Rehabilitation Incentive Loan Program, which provides loans of up to $125,000 for renovation, purchase or reconstruction on infill lots or rental housing units for affordable homes, essentially ensuring that housing stock remains available in the lower-income market.

“We have more demand than we had funds available so we had folks who were applying and were prequalified for these programs, but we’d run out of money so that’s going to help us address that issue,” Rogers said. “There’s a big demand for housing that people can afford, and so these programs help with that. They’re not huge programs, but it will allow us to do maybe 15 more home ownership loans and eight more of the rental rehab loans.”

The city’s budget included another $3.5 million assigned in its fund balance to respond to the housing committee’s recommendations.

Through New Hanover County’s budget and American Rescue Plan funding, the county will be creating a Workforce Rental Housing Assistance pilot project “to provide residents who qualify under workforce housing guidelines – 60 to 120% of area median income – with rental assistance,” according to a budget message from County Manager Chris Coudriet.

The county has also proposed using $3 million of its $45.5 million in American Rescue Plan funds to “provide assistance to homeowners who are in arrears on mortgages because of impacts from COVID-19. This would be in addition to the $7 million Emergency Rental Assistance Program that is currently underway through the county.”

Cape Fear Collective announced earlier this year that it had created a social impact investment initiative, Collective Ventures, with the goal of attracting $10 million in investments in the first year.

The organization used $1.8 million of a $2.5 million Live Oak Bank investment to buy a portfolio of 20 rental units to address affordable housing in the area, with 17 in New Hanover County – mostly in downtown Wilmington – and three in Pender County.

Cape Fear Collective recently closed on its purchase of Driftwood, a 15-unit apartment complex off Princess Place Drive in Wilmington.

Driftwood, a tax credit project developed 16 years ago to provide housing for chronically homeless residents, went up for sale in January and went under contract with CFC in March.

The $1.2 million transaction was completed with the help of investment support from Live Oak Bank.

“Their model of impact investing is something that we want to see succeed, and we’re really pleased to see the private sector investing in housing for people in our community who have kind of been left out,” Rogers said.

While the area still has a long way to go, recent efforts are encouraging to those working on the issue of workforce and affordable housing.

“The good news is that a solution or solutions for workforce housing are coming,” Rogers said. “I feel like it’s a new day.”