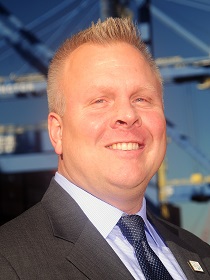 Hans Bean
N.C. Ports has named Hans Bean its next chief commercial officer, according to a news release.

Bean will replace outgoing CCO Greg Fennell, who is retiring, stated the release. Fennell will continue to serve in the CCO role until January.

Fennell has led N.C. Ports’ business development since being appointed to the leadership position in January 2015, stated the release.

Under his leadership, N.C. Ports has added new container lines and grown its perishables portfolio that supports the agriculture and grocery sectors in the Southeast, officials said.

“Greg has played an integral role in our success over the past five years. His knowledge and expertise of the industry has helped lead North Carolina Ports to record-breaking revenue years and container and general cargo volumes at both the Port of Wilmington and the Port of Morehead City,” said Paul Cozza, N.C. Ports executive director, in the release.

Bean, Fennell's replacement, will serve in his current role as senior vice president of business development for N.C. Ports until Fennell retires. He joined the N.C. Ports Authority in November 2016.

Bean has more than 20 years of experience in the maritime industry, officials said.

Before N.C. Ports, Bean held a senior sales and marketing role with APM Terminals North America. He also spent more than 10 years abroad with Maersk Line with a focus on beneficial cargo owners, stated the release.

“I am excited to lead North Carolina Ports business development and build on the solid foundation Greg established,” Bean said in the release. “Our team is focused on growing key business segments and expanding our capabilities. North Carolina and the entire southeastern market are poised for significant growth and NC Ports is positioned to support that market today and well into the future.”