Recent And Past Development Projects Honored With Stewardship Awards 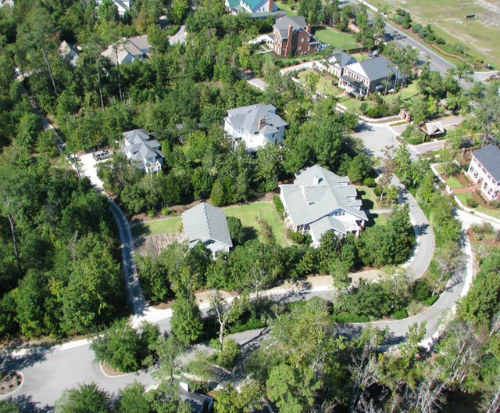 An aerial photo of Ogden neighborhood Demarest Landing, which won an Outstanding Stewardship award from the Lower Cape Fear Stewardship Development Coalition. (Courtesy of Scott Stewart)
When Scott Stewart talks about the communities he’s worked on throughout his career, he often uses artistic terms.

Those attributes helped lead the 2,200-acre Compass Pointe to win a special recognition award Thursday from the Lower Cape Fear Stewardship Development Coalition. And Stewart, who in addition to his work with Compass Pointe has designed and built other neighborhoods in the Cape Fear region, was recognized by the coalition, too, on Thursday afternoon with a Stewardship Champion award.

Another Stewardship Champion award was given to Brunswick County Habitat for Humanity during the coalition's awards ceremony Thursday, which took place at The Terraces on Sir Tyler.

The awards aim to recognize “residential, commercial and public development projects in Brunswick, Pender and New Hanover counties that demonstrate outstanding environmental stewardship through the protection, conservation, improvement, and awareness of our natural resources,” a news release on the awards luncheon said.

Stewart said Friday that he was humbled by the recognition. He said being able to work for Bobby Harrelson, developer and owner of Compass Pointe who accepted the community’s award Thursday, has been the opportunity of a lifetime because he has admired Harrelson’s vast portfolio of development work for decades.

Stewart pointed out that of the 2,200 acres that make up Compass Pointe, 822 of them are a designated conservation area.

Currently, crews are working on seven new neighborhoods in the community, where an emphasis has been placed on the connectivity of sidewalks, trails and waterways, he said.

Demarest Landing was started in 1992 to 1993 and completed around the year 2000, Stewart said. In the early 90s, concepts like low-impact development and Traditional Neighborhood Design were not the norm, but they were part of Stewart's vision.

“It takes time do to a custom neighborhood and navigate through all the required changes,” said Stewart.

He named the neighborhood after his father, whose middle name was Demarest.

Stewart said he plans to continue navigating the necessary requirements for sustainable, responsible development. While Compass Pointe is his current priority, he said he has not abandoned plans to create Riptide Aquatic Center in Ogden.

Describing Live Oak Bank's second building for Thursday's awards presentation, presenter Dylan McDonnell wrote: "Tucked away behind the pine barrens, unseen from major roadways and backing up to conservation land, this project blends right in the scenery. Utilizing local materials, LED lighting, efficient electrical, air handling, windows and doors and a parking design unlike anything I have seen, this project is THE model for office building designs."

According to a New Hanover County news release on the awards, the New Hanover County Cape Fear Museum Park, which opened in September 2015, was recognized "for its innovative green space that features an interconnected park-like landscape, smart storm-water management and engaging hands-on educational exhibits. The park was transformed from a former parking lot to bring the museum’s interpretive approach to history and science outdoors."

The county building at 320 Chestnut St. was completed in October 2015 and features the county’s first green roof, the release said. As part of the major renovation, according to the release, a roof garden was planted "to extend the usefulness of the new roof membrane, to provide natural cooling, and to reduce the environmental and financial cost of stormwater runoff."

“New Hanover County is delighted to be recognized for our innovation and stewardship in the community,” county manager Chris Coudriet said in the release. “As an organization, we are committed to serving the community through good governance.”

The New Hanover County Register of Deeds office, currently located at 216 N. Second St., is moving to 320 Chestnut St. on April 1, according to the office's Web page. The Department of Community and Justice Services, the public defender and the Guardian ad Litem offices are already located in the refurbished building.