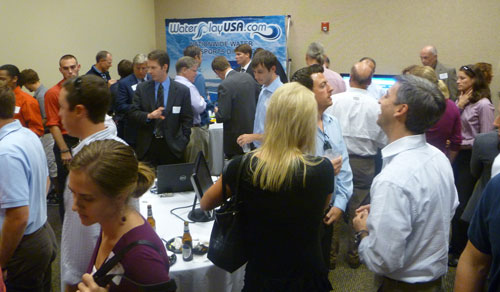 For any business, responding to customer feedback is a critical component for staying competitive.

This fact is not lost on Rand Nickerson, CEO of Opinion Lab, a Chicago-based company that collects and processes customer feedback data. Opinion Lab has recently expanded its footprint to include an office in Wilmington.

The local office serves as a customer service center for existing customers, to train staff and employs 15 of the firm’s 82 staff members. Nickerson said he originally began to tinker with idea of an office in the area primarily because of the region.

“I like this part of the world,” said Nickerson. The company originally opened an office in Southport, but moved to Lumina Station in Wilmington last summer, said Nickerson.

According to its website, Opinion Lab’s customers include ING, Delta, Expedia, Dell and other large firms. Nickerson said the firm has about 250 clients, most of them in the Fortune 5000,  and 50 of those in the Fortune 100.

“It is the modern version of the old survey business, you have to listen to the customer to run your business,” said Nickerson.

According to Nickerson, traditional methods, such as surveys or comments cards are not as effective today because today’s consumer is a lot more demanding and the old methods of communicating with customers are seen as intrusive.

“When the web was new, people did surveys because it was fun,” he said. “Now it is looked at as an intrusion.”

Not only have methods changed, but gathering feedback via the web requires new thinking as well.

“A lot of the most valuable feedback is open-ended comments. It is those open-ended comments that are the most useful, but you have to use natural language processing to structure the information, so you know who in the organization to route the data to,” Nickerson said. “There are some very sophisticated systems that understand sarcasm, misspellings and jargon and we use a number of those commercial systems to structure the data in different ways.”

Next, Nickerson wants to expand the firm’s local presence to tap into the University of  North Carolina at Wilmington community for research.

“We would like to work with the university to do some pure R&D and build some more functions into our product,” said Nickerson.

“There is a next level that we need to get to, we call it ‘comments of significance,’ a comment that is impacting your business right now or is going to impact your business. We need the help of academics and some graduate students to help with product development. We need to test our ideas on how to discover these ‘comments of significance’ and we want to work with an academic institution to do that.”

Pandoodle aims to take product placement to a new level

At the recent UNCW Entrepreneurship Center Rocket Pitch, participant Dirk Brown pitched the idea that customizing downloadable video is the next big thing.

His company, Pandoodle, uses technology to insert content, such as an advertiser’s logo, into video in real time.
“We have three patents pending,” he said. “The key one is around brand placement.”

Pandoodle’s technology can also customize the inserted content based on the person who is downloading it.

“There are unique things, I know where you are downloading, and I know something about you,” said Brown.
“We can customize the brand placement. The same way your Gmail account shows relative ads.”

Brown said the idea behind his company, based in Columbia, S.C., comes from the world of film.

“People do product placement in movies, where an actor may drink a soda,” he said. “If the movie gets downloaded in Brazil, for example, we can replace it with a local brand.”

Brown explained that his concept has the potential for significant growth because it mirrors previous ventures he has been involved in.

“I have a broad range of domains that I have built companies in, but the common theme is a very large market and the that market is shifting in a way that a small company can make a big difference,” said Brown  “It turns out that the digital media market is one of those. It is very obvious that the economics in the media industry are changing.”

According to Brown, Pandoodle is aiming to raise between $1.5 million and $2 million in financing in the first quarter of 2012.