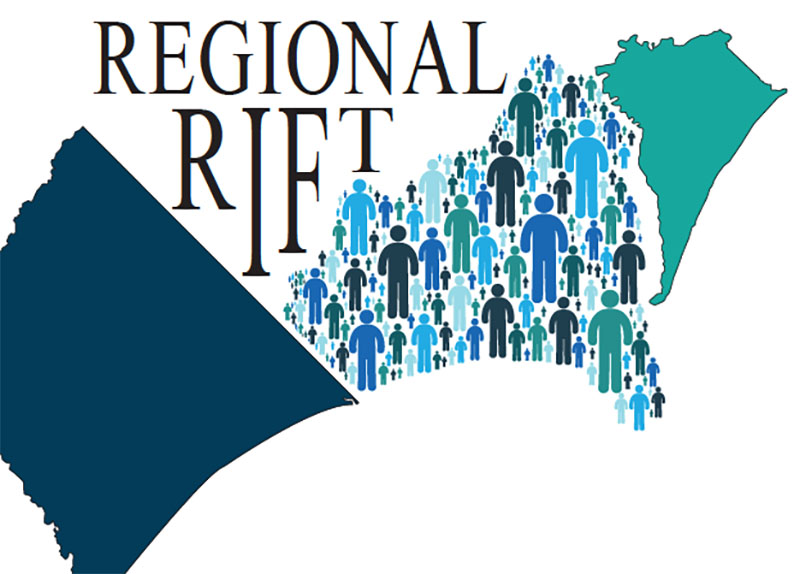 After the 2020 census, will Brunswick shift again? 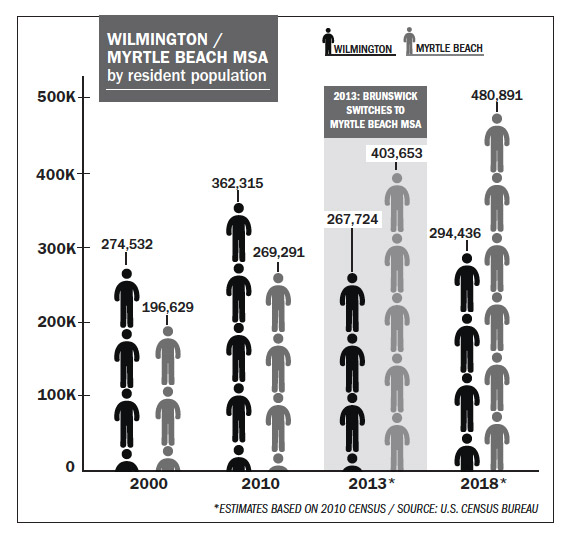 To the federal government 20 years ago, the Wilmington area truly was the tri-county region. But in 2013 that changed.

The federal Office of Manage­ment and Budget – because of an urban area difference of 643 people in a U.S. Census count – grouped Brunswick County in with the Myr­tle Beach, South Carolina area.

At the time, the 2010 census recorded a population of more than 107,000 in Brunswick County. The move took a huge chunk out of the Wilmington Metropolitan Statis­tical Area (MSA) and was also counted as a loss for the state.

“This is the kind of thing where it made sense to someone in Wash­ington, but it makes no sense to the people who live here and know the area,” said Frank Williams, chairman of the Brunswick County Board of Commissioners.

The switch caught many leaders at the time by surprise.

Most recent estimates suggest Brunswick County’s population is nearly 137,000. But that will change with the 2020 census. And for many, it’s an opportunity to gain back what was lost.

Efforts at the local level are currently taking a two-pronged approach to the issue: urging 2020 census participation and watching for any changes to the rules that define the MSAs.


The divide between Brunswick County and the Wilmington area today is much more than a bridge away.

But as far as the change’s impact overall, Williams said most of the blow lies above the county line.

Wilmington, in the end, was left with New Hanover and Pender counties in its MSA.

“I think where it really hurts … the areas that we’re closest to in North Carolina don’t have our numbers when industries are look­ing at them,” Williams said.

That could affect the county in attracting business to its largest business parks, some of which lie in the northern part of the county, closer to Wilmington, he said.

The 2020 census is a chance to get that accurate picture.


Many officials across the region are encouraging people to partici­pate in this year’s census.

Complete Count Committees, formed to bring awareness about the census, have been set up in both New Hanover and Brunswick counties.

Residents are being mailed details about how to complete the census online or by phone or mail. As a result of the coronavirus, census officials stated in March that “the most important thing you can do is respond online, by phone, or by mail when you receive your invitation. Responding now will minimize the need for the Census Bureau to send census takers out into communities to follow up.”

The New Hanover committee is pushing the Cape Fear Counts campaign – a collaboration with the city and other local members – that will include social media campaigns.

“It’s absolutely important to the future of our region,” said Tyler Newman, president and CEO of Business Alliance for a Sound Economy (BASE).

With the census counted every 10 years, its outcome this year will influence the area for the coming decade.

Newman and Natalie English, president and CEO of the Wilmington Chamber of Commerce, see the census as one approach to the MSA issue.

“We believe, based on the population growth that we’ve seen in the last 10 years, that [Brunswick County] will naturally tip back. But not if we are lazy about the census,” English said.


Parallel to the census is keeping an eye out for modifications to the rules that govern the MSA delineations that resulted in the shift for Brunswick County.

The rules that define MSA regions are set by the OMB and result from Census Bureau data. Those standards are reviewed and revised once every 10 years, prior to each census, according to the bureau.

Nuances in the OMB rules regarding transportation connections and corridors worked against the Wilmington region in tying much of the area south of Southport to Myrtle Beach, English said.

The OMB’s review of the standards will include the opportunity for public comment, Newman said.

“We’re working on it every day,” Newman said. “The census is going to be done in 2020. We need everybody to participate in that so we get an accurate count of who is here. But as important are the rules.”

Legislation was filed in Congress in 2014 to see Brunswick returned to the Wilmington MSA, but failed to be approved.

Another piece of legislation, the Consolidated Appropriations Act of 2018, included language that set up a process for challenging MSA delineations set by the OMB.

“In 2018, I worked to include a provision in the relevant appropriations bill, which established a process that lets counties challenge delineations when a new MSA cycle begins.

“It’s my hope that counties won’t need to use this process, but if they do, it gives them a way to confront OMB with the economic realities of the state,” U.S. Sen. Richard Burr (R-N.C.) said.

The Wilmington MSA is also a factor as the Wilmington International Airport (ILM) competes for business, including adding flights.

It would benefit ILM if Brunswick County returned to the Wilmington MSA, by showing its numbers are consistent with what the government shows, said Julie Wilsey, ILM’s airport director.

“When we talk to airlines, we try to tell them our market area, and show the potential number of travelers that can fill seats. Our market catchment area, which includes New Hanover and the surrounding counties, doesn’t match what the census data says for the MSA,” Wilsey said.

The Wilmington region is nearly 50% larger, population-wise when you include Brunswick County, said Adam Jones, a regional economist.

New Hanover’s economy has grown by 22% since 2010, Pender’s by 13% and Brunswick’s by 8%, but when trying to analyze the region, due to some data constraints with the MSA, it’s been hard to get the full picture, he said.

Wilmington Business Development (WBD) has been able to overcome some of the data issues, officials said.

“It would certainly be cleaner from a data collection standpoint if Brunswick County was included in our MSA. But we can easily reaggregate U.S. Census figures in filling client requests for population and workforce information. Consultants also have the research capacity to do that,” said Scott Satterfield, CEO of WBD.

Interested consultants, he said, “don’t disqualify us for decisions made in Washington, D.C.”

People and businesses are still finding their way to Brunswick County. But the overall picture, for economic development reasons, could be clearer, Williams said.