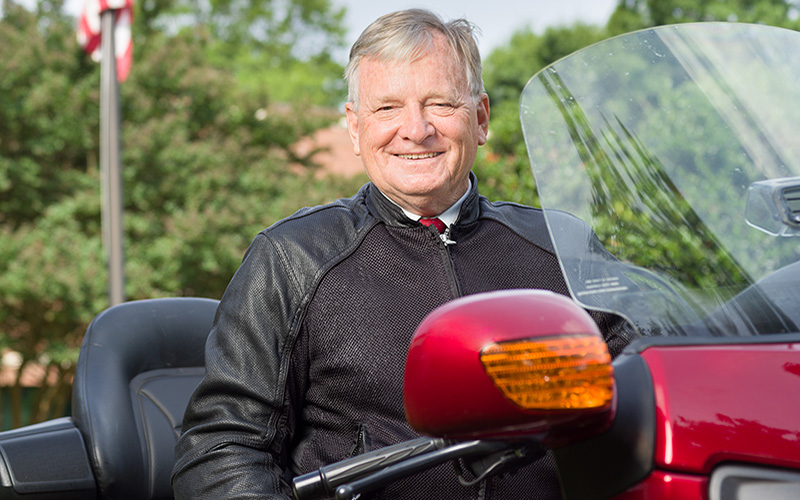 N.C. State Treasurer Dale Folwell (Photo by Christer Berg)
To say Dale Folwell hasn’t been a fan of some recent decisions by New Hanover County’s government and elected officials is a bit of an understatement.

Folwell, who was sworn in as state treasurer of North Carolina in 2017 and re-elected in 2020, tends to offer his opinions bluntly, without any sign of fretting about how they’ll come across to politicians in New Hanover or elsewhere in the state.

To that end, Folwell states plainly that, in his view, New Hanover’s efforts to redevelop a county-owned block in downtown Wilmington using a public-private partnership made no sense. Not when the county could borrow the money for the project itself at a low rate. This fall, Folwell made his opinion of the effort – Project Grace – clear as chair of the Local Government Commission (LGC), which oversees large financial transactions for the state’s municipalities. Ultimately, the LGC had the authority to make or break Project Grace as a P3, and in September, it swatted down the idea of an $80 million, 20-year lease between New Hanover County and Zimmer Development Co. when no one on the LGC seconded a motion to approve the agreement.

“We’re talking about a county that has some of the highest economic momentum of any county, not just in North Carolina, but maybe on the whole Eastern Seaboard. And we’re dealing with a county that is financially in the shape where they can borrow money cheaper than anyone else,” Folwell said in an interview in October. “So, I’m asking myself, why would a county that has all this stuff going for them, that 85 counties in this state would trade places with in a snap of a finger, do something this complicated when they can borrow money at 3% interest and they’re paying somebody either 8 or 12% profit on this?”

New Hanover County officials defended their proposal, which could have resulted in a new main branch of the county public library, a new facility for the Cape Fear Museum and private development in the form of residential and commercial space.

“We appreciate the LGC’s consideration of the financials for this project and the LGC staff ’s thoroughness and recommendation for approval, and we are certainly disappointed in the outcome,” New Hanover County Manager Chris Coudriet said in a Sept. 22 statement. “This public-private partnership would have ensured that the county could control the uses on the entire block so they are complementary to what our community vision is, while also bringing in tax revenue through the private investment in a well-timed and expeditious way for the community’s benefit. At this time, based on board actions to date, the county still plans to move forward with a new state-of-the-art museum and library, it will just be in a different structure and will not have the same near-term transformation of the full block that we had hoped for.”

In a previous New Hanover County matter, the state treasurer’s office had no authority to intervene, but Folwell made his opinions known by joining the group Save Our Hospital as he opposed the sale of New Hanover Regional Medical Center to Novant Health.

“You had one of the only independent, high-quality, high-access, profitable, affordable, major hospitals in the United States,” Folwell said, lamenting what he sees as a loss of that status.

In a deal that closed in February 2021, Winston-Salem-based Novant Health bought the NHRMC health system for nearly $2 billion. Now called Novant Health New Hanover Regional Medical Center, the system has been the subject of patient complaints about wait times and service availability. The federal Centers for Medicare & Medicaid Services informed the hospital in July that it was at risk of losing Medicare funding because of alleged issues with services and staffing unless improvements were made, according to a Greater Wilmington Business Journal story in September. By August, CMS officials had notified current hospital president Shelbourn Stevens that Novant Health NHRMC was again in compliance with the agency’s conditions of participation, the article stated.

“I firmly believe that NHRMC would be in worse shape today without our partnership with Novant Health,” Gizdic said in a media briefing Sept. 9. “The health care industry has changed dramatically the past few years.”

Whereas hospital officials describe a bright side, Folwell sees more money coming out of the pockets of the average resident. And he’s been taking all hospitals in the state to task on pricing transparency and loss claims.

Folwell and the State Health Plan released a report Oct. 25 showing that the majority of North Carolina hospitals did not lose money on Medicare but profited. According to a press release from Folwell’s office, the report found disparities between the Medicare losses claimed by hospital executives and the numbers that hospitals reported to the federal government.

“The hospital cartel is overcharging you because they can, not because they need to,” Folwell said in the release.

Hospital system officials pushed back against the findings. Novant Health called the content of the treasurer’s report “an incomplete narrative that utilizes inconsistent data sources and provides an inaccurate picture of our financial results because it reflects hospital data only,” in a statement to the Winston-Salem Journal.

Folwell said he knows what it’s like to struggle to pay bills. Born in Winston-Salem, Folwell grew up in a single-parent household with three children and no child support during the 1960s and ’70s, experiencing what he describes as “the inequality of low expectations.”

“When I was in 10th grade and went to speak to a guidance counselor about taking an AP (Advanced Placement) class, they pulled my folder and they looked at my grades and they said, ‘You know, you’d probably be better suited to apply for a job bagging groceries at the A&P.’”

He said determination led him to start taking college classes anyway, and he graduated with bachelor’s and master’s degrees in accounting from the University of North Carolina at Greensboro.

During a recent trip to Western North Carolina, some fourth graders asked him what he likes most about his job, to which Folwell replied, “advocating for the invisible, especially those who teach, protect and otherwise serve the taxpayers.”