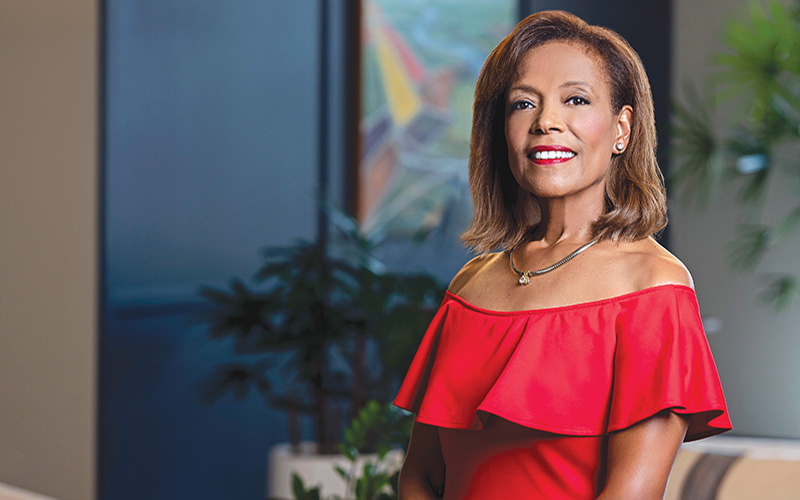 (photo by Michael Cline Spencer)
For Margaret Weller-Stargell, working at Coastal Horizons Center has been what she’s described as her “chosen career path,” so much so she’s been with the organization since 1985 when she started her work there in counseling.

Today, Weller-Stargell serves as the president and CEO of Coastal Horizons Center, which is a nonprofit corporation that provides crisis intervention, justice services and a range of substance use and mental health services to more than half of the 100 counties in North Carolina.

When Weller-Stargell first started out with the organization, she was working in its crisis center, then moved into the role of director of crisis intervention only a year later.

As the president and CEO, Weller-Stargell strives to lead the organization and ensure its patients receive the best care possible, which includes making sure they have the best staff possible. Recently, areas of growth at Coastal Horizons have included behavioral health and primary care. This is largely due to the rise in individuals needing substance abuse and mental health services.

“We realized that in order to treat the behavioral side of an individual, we had to treat the primary care too because one directly impacts the other,” she said. “I would say too that the growth has been because some of the stigma that we might have seen 20 years ago has thankfully lessened.

“There’s more acceptance and acknowledgment that people are struggling with mental health and substance abuse issues. There needs to be a place, a safe place, for them to go and seek treatment and services. And that’s what Coastal Horizons does. That’s why we’re here.”

The nonprofit fundraises through events, with this year marking the 20th annual Willie Stargell Celebrity Invitational in November.

On the state level, Margaret Weller-Stargell has been active on state health and human services boards including the N.C. Medical Care Commission and N.C.

For the past couple of years, Weller-Stargell and the Coastal Horizons board have been vocal about what they feel the nonprofit’s role should be with the county’s newest treatment center.

In 2020, New Hanover County commissioners voted in favor of Louisville, Kentucky-based The Healing Place to operate a treatment center being built in Wilmington.

Earlier this month, Coastal Horizon’s board issued a statement repeating its disappointment with the decision of awarding the center’s management to the out-of-state provider since medication-assisted treatment (MAT) is now an option at the Wilmington site.

“Coastal Horizons has a proven record of working with patients prescribed MAT,” the Sept. 7 news release stated. “Our Board of Trustees fully supports our President and CEO Margaret Weller-Stargell and trusts her nearly four decades of experience working for and leading Coastal Horizons Center…”

As far as future plans for Coastal Horizons, Weller-Stargell recognizes that she and the organization are strategic in looking at what the needs of the community they serve are.

Additionally, they strive to address those needs when they can but shy away from taking on anything risky. Weller-Stargell said that Coastal Horizons doesn’t take on more than they believe they can appropriately manage.

“It’s important to know that we have the appropriate infrastructure to be able to manage that care that we want to provide,” Weller-Stargell said. “We certainly want to home in and continue to make sure that we’re providing the best quality of services in all of those counties we serve. As we see other identified needs, and that is something we can take on, then we will.”

Margaret Weller-Stargell was part of last year’s WilmingtonBiz 100 as an Influencer. This year’s group will be announced in late-September and highlighted in the December issue of the WilmingtonBiz Magazine.