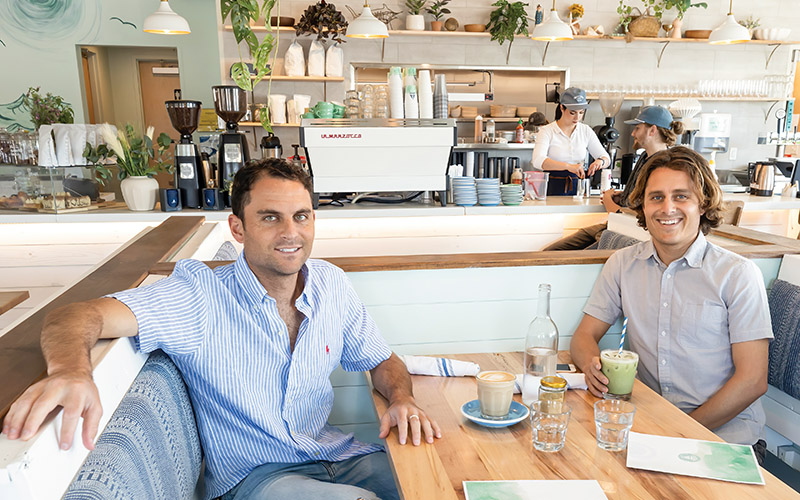 (photo by Megan Deitz)
Coffee and culture once again intersect at a new Drift location in Wrightsville Beach. Located in the former Gulfstream Restaurant space, the cafe opened in April, just in time for the summer tourist season.

This time, along with premium coffee and the shop’s known casual coastal aesthetic, an expanded menu is offered with a full sit-down service. At close to 3,000 square feet, the new location is Drift’s biggest to date.

For owners and brothers Ben and Michael Powell, the transition to the new space was relatively problem-free.

“There weren’t any renovations, and the equipment and building were already set up,” Michael Powell said.

The space at 114 Causeway Drive once housed the local beach staple Causeway Café.

One of the biggest challenges for turning it into the latest Drift location, Michael Powell said, was “the hiring of more specific positions. At the cafes, employees usually blend roles more. With a full-on restaurant, it became much more complex. Beyond adding a wait staff, we definitely needed more leadership-type positions.”

“Mathers had to scale up our menu, which was different from our other locations, but still offer the same staples that customers come to rely on,” Michael Powell said.

The brothers started with a cafe in Ocean Isle Beach in 2014 and moved into Wilmington in 2017 with a location at Autumn Hall. Two years later, Drift opened in Mayfaire Town Center.
With the expansion comes keeping the Drift aesthetic alive throughout all of its cafes.

“Our store atmosphere is unique to each location, with the Drift brand always in mind,” Ben Powell said.

Customers have come to expect natural materials, such as plants and greenery, with pops of color. The owners strive for an apartment-like feel that is bright and open.

“The younger generation wants a complete experience. The days of homogenous, fast-food-type interiors are coming to an end,” Ben Powell said.

The idea to turn the Wrightsville location into a full-service cafe was inspired by the brothers’ recent trip to South Africa.

Ben and Michael happened upon a particularly memorable business while traveling, and its “owners there fired us up about the idea. We decided to give it a shot,” Michael Powell said.

After returning from their trip, he said, they contacted the Gulfstream team right away, and “they were interested in selling and we are thankful that it worked out.”

The Drift owners long believed that their business could support two different concepts, a sit-down, full-service model and a quick service as they had done before. All they needed was the right spot, and within five months, the Wrightsville Beach location opened its doors.

The “Drift Cafe,” as it is referred to (other locations are known simply as Drift coffee shops and kitchens), offers the same beverages as the others, but the food is more involved. There are larger entrees and greater variety as well as beer, wine and cocktail selections. The expanded brunch and lunch offerings include pancakes, bowls and riffs on eggs benedicts, among others.

The Powells did not envision themselves in the restaurant industry. Growing up in Ocean Isle, they were known for being in the water more than out of it. Avid surfers, they traveled the world competing on regional and national levels. While traveling overseas, Ben and Michael Powell found a sense of comfort and community in the local cafes they frequented – especially in Australia – that made a lasting impression. They brought back that feeling and opened the first Drift in their hometown.

“We felt it was natural to open there,” Michael Powell said. “We had no background in hospitality, so it was definitely a wild start.”

Gradually, the brothers learned the ropes of starting a business. Admittedly, among the “busy, fun and chaotic” environment they find themselves in, there has been the usual fair share of challenges. For Michael Powell, investing in their entry-level team, building up trust and connections and seeing growth are positives, but the “transient nature of the hospitality business as a whole is tough,” he said. “It is hard to watch members go.”

For now, the Powells are not slowing down. At the request of their customers, a fifth location is planned for downtown Wilmington. Coffee will be served up at another Drift next to Bijou Park on North Front Street. The downtown site, expected to open this summer, will copy the “coffee shop and kitchen” concept, like the Mayfaire and Autumn Hall locations.

While the owners are appreciative of their expansion plans, at the same time, they remain cautious.

“Opening and growing is fun, but our goal is to take care of our team so they can continue to give our guests something memorable,” Michael Powell said. “There is a bit of uncertainty about what is next; we want to be sure we can responsibly handle what we have signed up for currently before moving into the next phase of operating more sites.”