Looking For An Oasis 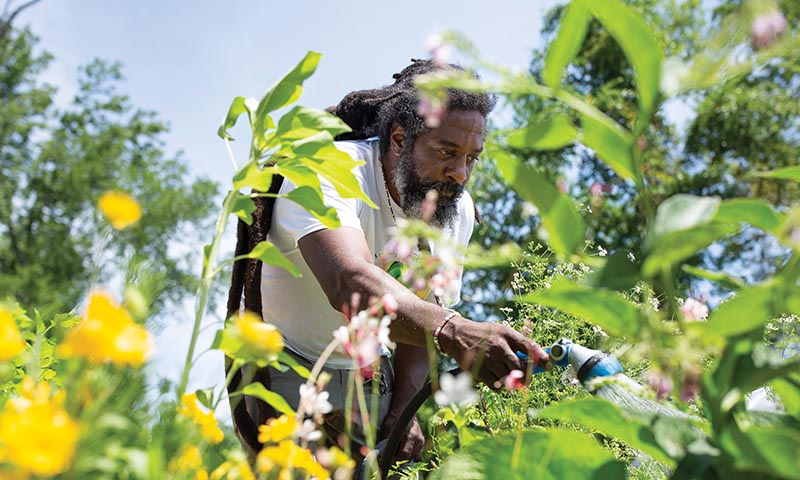 It was late November 2020, and the line – three wide and 80 yards long – stretched around the corner and down the road. In the warehouse, Steve McCrossan, executive director at NourishNC, gave out boxes full of nonperishable foods, fruits, vegetables and meat and bread with a team of volunteers.

“We prepared for it,” McCrossan said, remembering the COVID rush that has slacked off as the pandemic waned. “What we’re seeing now is government influence working. It took pressure off of us.”

But COVID relief is temporary.

McCrossan has been working to address the issue in New Hanover County for almost six years. When he started, 1 in 4 kids was food insecure. Before COVID, it was 1 in 5 kids.

“Going into COVID, you could say we were winning,” McCrossan said. “We’re back to 1 in 4 now. One bad storm can turn all of this around.”

While COVID exacerbated the issue, food insecurity has been an ongoing problem for decades in the Cape Fear region.

Being without food or lacking access to fresh fruit and vegetables is a reality for more than 44,000 people – including more than 12,000 children – in New Hanover County who don’t know where their next meal will come from, according to Rise Up, a nonprofit that runs a farm off South College Road.

Food deserts in the Cape Fear region have emerged at six times the rate of the rest of the United States since 2013. 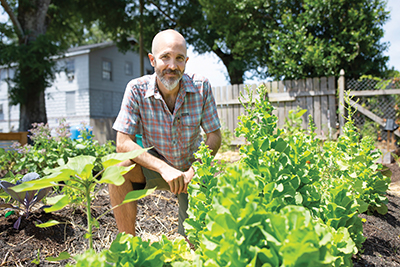 NourishNC is one of many groups looking to address the issue ranging from creating urban farms to setting up mobile produce markets to bringing a long-promised grocery store to Wilmington’s Northside. Each organization is doing its part in an orchestra of relief for a problem that spans not just food but touches on other systemic problems such as poverty, transportation and affordable housing.

“I definitely feel a groundswell,” said Evan Folds, who works with the Northside Co-op as a project manager. “Part of it is getting ahead of what the problem is. We need better data and a better understanding of what a food desert is.”

The U.S. Department of Agriculture (USDA) defines food deserts as census tracts – or neighborhoods – that are low-income and low-access. As of 2019, New Hanover County has eight food deserts, according to USDA standards.

The Cape Fear Collective – using a model created with the Food Bank of Central and Eastern North Carolina and N.C. State University – identified three additional areas with food hardship. Two of these “under-the-radar” areas are extensions of current food deserts: the Southside and New Centre areas. The third is along the river, north of Snow’s Cut. This area has historically been classified as a food desert but was recently downgraded by the USDA.

Through inclusion of additional variables, such as educational attainment, charitable giving and uninsured population rates, the model was able to quantify the likelihood that a neighborhood was a food desert, rather than a binary “yes or no” classification.

The model also showed the burden of food insecurity falls on communities of color in the region. More than 30% of Black and almost 25% of Hispanic residents live in food deserts compared to only 15% of white residents. Many of the food deserts are in census tracts that have high rates of poverty. Census tract 110 near Houston Moore has the third-highest childhood poverty rate in the state.

Often these residents are forced to shop at dollar stores, convenience stores and gas stations where selection and fresh produce are limited and prices are higher. 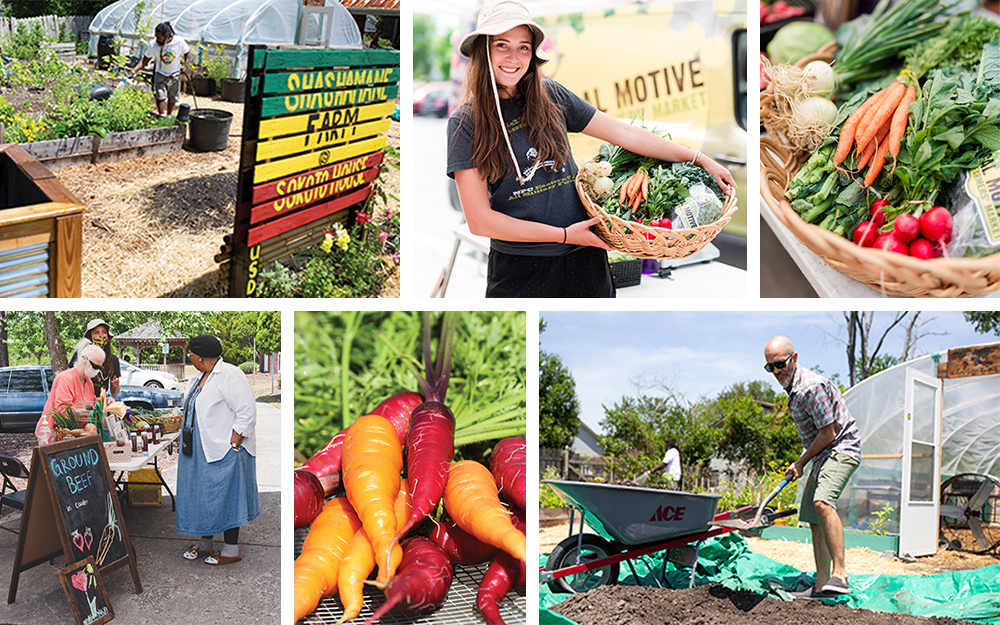 “Agriculture makes us who we are, and we have collectively lost the thread,” Folds said. “Agriculture is about more than growing crops. Eating is an agricultural act, and the source of the chronic disease epidemic we are currently experiencing is rooted in our disconnect from agriculture.”

A trained biologist, Folds says his passion is to establish regenerative food systems and teach people how to speak “agriculture.”

He is working to change local ordinances to allow Wilmington residents to grow food for profit within city limits. He is also working as a program manager with the Northside Food Co-op – its board is chaired by Support the Port’s Cedric Harrison – to finally bring a grocery to the Northside (which runs broadly from Market Street toward Castle Hayne Road and Water Street to about North 30th). The group incorporated in March and is selling lifelong memberships for $100.

“The Northside Food Co-op is positioned to engage all aspects of the food, farming and health landscape in a way that ties it all together to impact the social determinants of health,” Folds said. “Building a world that works for everyone is actually a profitable endeavor, but we need to adopt true cost accounting and provide a framework where people are not imprisoned in their own reality without an ability to thrive.”

The co-op model is intentional, according to Folds, because it brings a bigger local investment than just bringing a chain store to the neighborhood. It is intended to create jobs in addition to fighting food insecurity.

The grocery is likely five years away. In the meantime, the Northside Co-op plans to launch a farmers market and small grocery pilot program. Both initiatives mesh with other groups looking to build a pipeline of fresh produce into the food deserts. 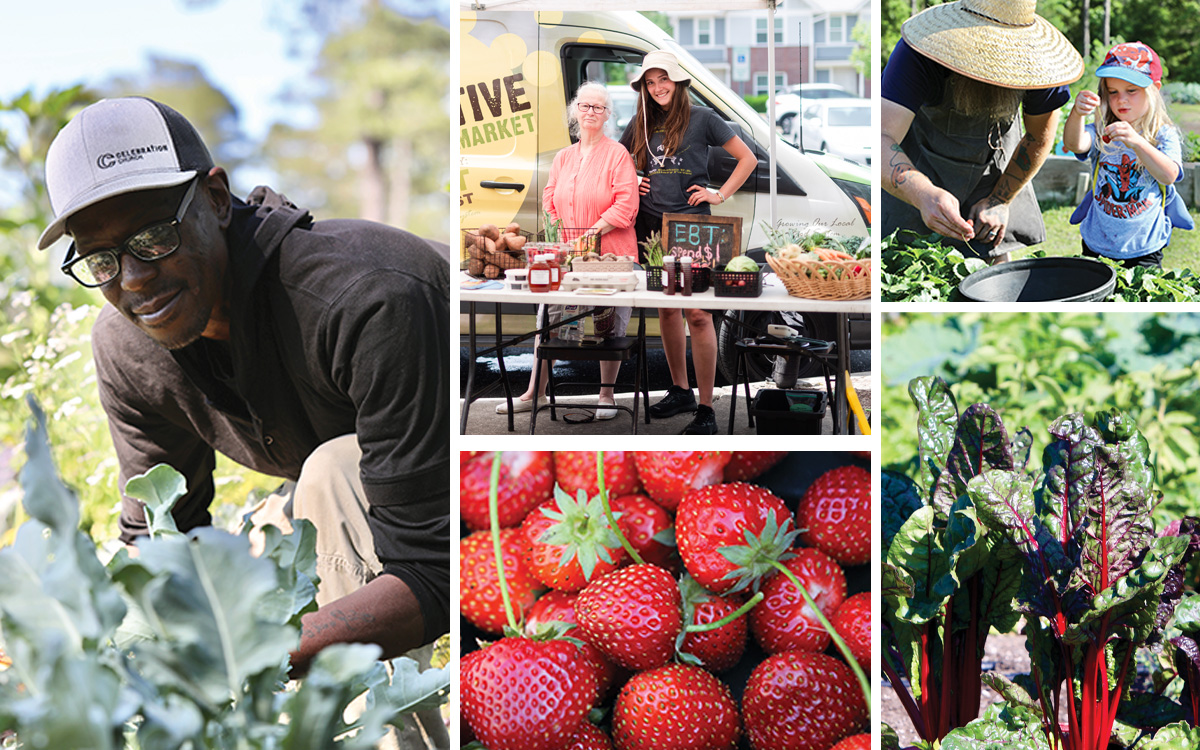 Feast Down East, a nonprofit organization working to grow the local food system, is bringing the produce section to residents in food deserts via its Mobile Market program.

Earlier this year, the group won a $249,180 Farmers Market Promotion Program grant to keep the Local Motive Mobile Farmers’ Market operating. The money is an extension of the grant that initially launched the mobile market operation. 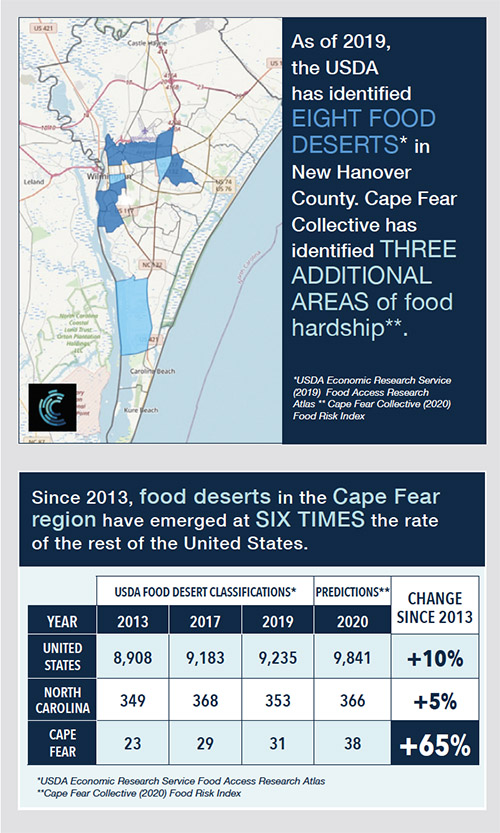 “Wilmington is a good place for something like this,” said Owens, a native Michigander who studied environmental and organizational studies at the University of Michigan. “Agriculture in North Carolina is great.”

Her program is especially helpful to those receiving SNAP – commonly called food stamps – benefits. Each dollar SNAP recipients withdraw from their account to spend on fresh produce from the market is matched for up to a total of $20.

Bringing the produce doesn’t just feed people. Food insecurity leads to a host of health issues ranging from diabetes to gout. Owens sees the benefit of bringing fresh produce into the community.

“It is a foundational part of life to eat food that is good for you,” she said. “It would be great if we didn’t have to exist.”

In addition to the mobile market, urban farms have sprung up creating more access to fresh food. 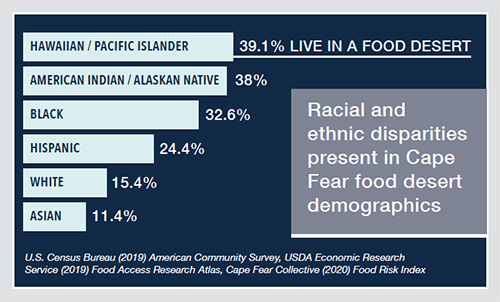 Tucked behind Global River Church on South College is the Rise Up Community Farm. Founded in 2019, Rise Up Community Farm is chemical-free and uses sustainable farming practices to grow everything from corn to strawberries. Honey is cultivated from hives at the back of the farm, and a three sisters garden of corn, beans and squash is starting to sprout.

Mari Carl Fisher, the farm’s manager and executive director, worked at a Florida nonprofit farm and at Food Bank of Central and Eastern North Carolina before launching Rise Up. Her job at the food bank was to get donated produce from grocery stores and farmers. But getting food was just part of the solution, which is why when the pastor provided some land behind the church, she jumped at the chance to start the farm and workforce programs.

“Our hope is that, while we’re helping to provide access to fresh produce for our neighbors experiencing food insecurity and meeting an immediate need,” Fisher said, “Rise Up is a part of a growing movement across the country to address food insecurity through urban agriculture, and we feel grateful to do that here in Wilmington.”

But the farm is doing more than just growing food. With an eye toward some of the systemic issues around food insecurity, Rise Up is pairing a life skills and workforce development program with the farm to help its youth volunteers with financial literacy, resume writing, interview skills and public speaking.

“One of our goals with our programming is to ensure that youth are equipped with skills that empower them to lead and be successful in their future,” Fisher said. “Our youth programming will help be a part of the long-term solution by providing valuable life and job skills that can help end food insecurity someone may be facing.”