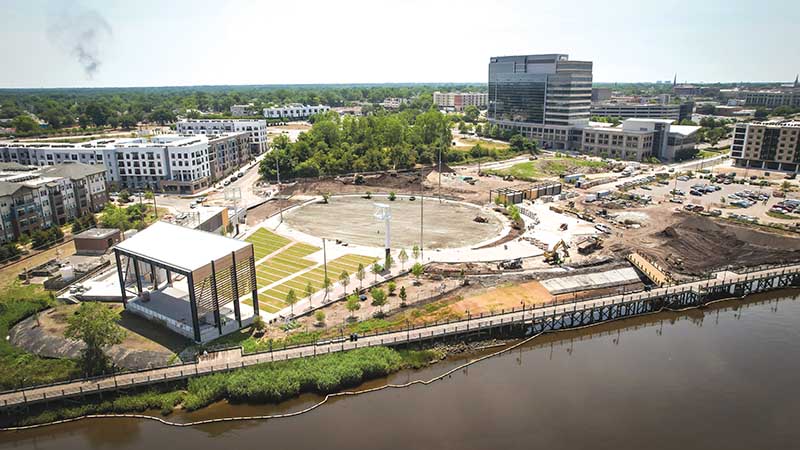 Photography by T.J. Drechsel and Madeline Gray
The idea of a $37 million baseball stadium on the waterfront in downtown Wilmington didn’t hit it off with Wilmington voters in a 2012 referendum. But four years later, $38 million worth of park projects did.

The crown jewel of the projects made possible by that 2016 bond referendum is Riverfront Park on the Northeast Cape Fear River, a landmark expected to bring in visitors and dollars and satisfy residents’ recreational demands. The park and its concert venue, Riverfront Park Amphitheater, are situated on the 6.6-acre site where the minor league baseball stadium might have been built.

“I’m glad that the city council made the decision to buy the property after baseball failed,” Wilmington Mayor Bill Saffo said of the city’s $4.1 million purchase in 2013. “Even though we lost (the baseball vote), I think at the end of the day, the city has won because the city turned around and said, ‘You know what, not too interested in baseball, but we’re really interested in music, in a nice park on the river.’”


In addition to the concert venue, for now called the Riverfront Park Amphitheater, and greenspace, the park is set up to be able to meet a variety of recreational and event demands, including wide lawns, a large plaza, a playground, a splash pad, trails and gardens.

“I remember when we first unveiled our master plan, somebody said it looked like we had thrown everything but the kitchen sink into the concept,” said Amy Beatty, community services director with the city, who has been spearheading the creation of the park and amphitheater. “But that gets back to that feeling of it being an active park. We want the park to be just as busy on a Tuesday morning or a Thursday night or a Saturday afternoon. And so we need to be able to provide people with areas of the park that are programmed.”

Those programs will be paid for in part from the proceeds the city receives from concerts and events.

National performers aren’t the only benefits the nearly $35 million park is expected to bring to Wilmington.

“I think it’s going to be a great economic development engine for not only the city but for the region,” Saffo said. “Because when people come here, whether they’re vacationing or living in Brunswick County or Pender County or even Horry County (in South Carolina), you’re going to be able to come here and see first-class entertainment in a first-class venue on the Cape Fear River.”


The park’s evolution came with challenges.

Its initial $20 million price tag ballooned as the cost of construction and materials skyrocketed, particularly after Hurricane Florence hit Wilmington in 2018. The cost went up to $31 million, with Live Nation kicking in $4 million. Of that, the concert promoter contributed $2 million as a result of reduced production costs achieved by the park having permanent structures, including a restroom building.

Approving an additional $11 million also allowed the use of high-end materials for the park and amphitheater, including steel, brick, granite and locally harvested Southern cypress.

“As we were at final design, we presented different options to city council with some cost containment strategies, looking at changes in materials, looking at phasing parts of the park, etc.,” Beatty said. “And city council believed in the project and believed that it needed to be high-end, first-class and reflective of the emerging northern downtown district and surrounding investment, so they went for the full project with the high-end materials.” 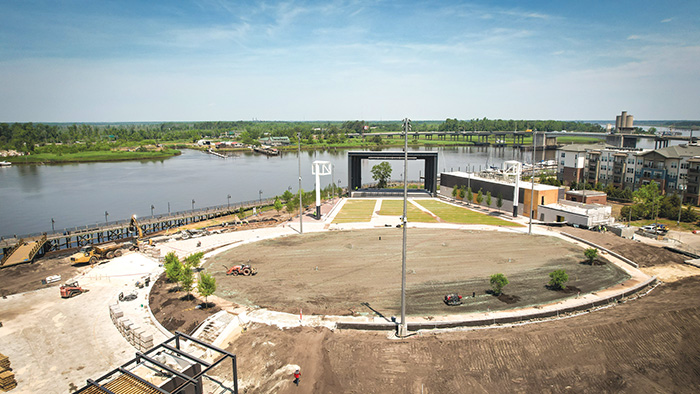 As a result of its design and components, the park became the first outside of New York to achieve a resilient waterfront design certification from the New York City-based nonprofit Waterfront Alliance.

“Resiliency is always a core component of our design process. At (Riverfront Park, formerly called North Waterfront Park), we chose materials based on long-term durability and resistance to flood damage,” said Jennifer Sage, partner at one of the park’s design team members, Sage and Coombe Architects, in a Waterfront Alliance announcement.

Sage said that the materials used for Riverfront Park have created “architecture that is robust while remaining warm and welcoming. Buildings are elevated at least two feet above the base flood elevation, meaning the park and its facilities will be a valuable community resource for years to come.”


The direct revenues the city will receive through its agreement with Live Nation include rental payments of $200,000 annually, $2 per every ticket sold, 50% of food and beverage sale revenues from civic events and 50% of facility title naming rights.

The annual costs to operate Riverfront Park will result in an $88,300 increase to the city community services department’s budget, Beatty said, with $82,300 going toward the addition of two grounds technicians and maintenance supplies. The remaining $6,000 is budgeted for administrative expenses, she said.

By contracting out management of the Hugh Morton Amphitheater (also known as Greenfield Lake Amphitheater) to Live Nation, “the city was able to save on the expenses of a new recreation supervisor position. The recreation supervisor who previously oversaw Greenfield’s amphitheater will move to Riverfront Park,” Beatty said. “This position will staff the park 40 hours a week and will oversee Live Nation’s contract, the city’s rental program for the park and safety and security measures and will respond to walk-ins and phone/digital inquiries.”


With the sellout of the park’s Widespread Panic concerts came a flurry of hotel bookings, including downtown hotels that have suffered major losses as a result of the pandemic.

“When it was announced that Widespread Panic was coming, we saw a big boost in demand (for rooms). It will be a very busy week here in Wilmington,” said Zach Brigman, general manager of Embassy Suites by Hilton Wilmington Riverfront. 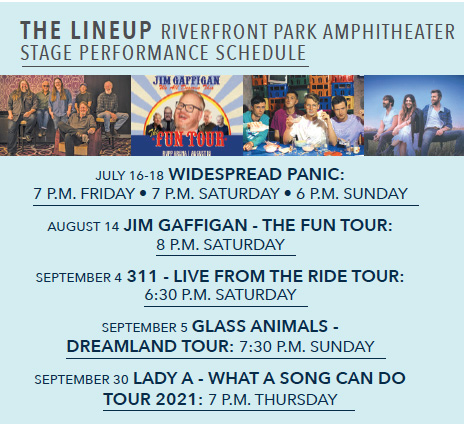 Saffo said he thinks more hotels are on the way to downtown Wilmington, in part as a result of the concert venue and also as conferences and conventions come back into play after their pandemic hiatus.

Already, new apartment communities surround the park, including one under construction by Virginia-based Kettler. The Kettler riverfront project, adjacent to the park, will hold 293 apartments, a 490-space parking deck and 4,500 square feet of retail space.

“It’s definitely one of the main reasons we were drawn to that site,” said Graham Tyrrell, senior vice president of Kettler, of Riverfront Park. “With the river as well and the property’s proximity to downtown made it a great combination of location elements.”

He added, “We thought that was a great amenity for residents. It’s a great place for residents to walk their dogs, play with their kids, just relax, and then on top of that, with the concerts and events that are planned, those will add an extra dimension to living in the apartments there.”

After eight years of negotiating and planning, construction is expected to be complete by the end of June, and the park’s grand opening is scheduled for July 4.

“You know when you stand in the park, and you stand on the stage and you look south and you see all of the development that has happened (around the Wilmington Convention Center) … It’s inspiring, and it’s validation,” Beatty said. “There’s been a lot of public and private investment in downtown, and I think this park was the catalyst for some of it, and I think it’s gonna be the anchor for so much of it.”