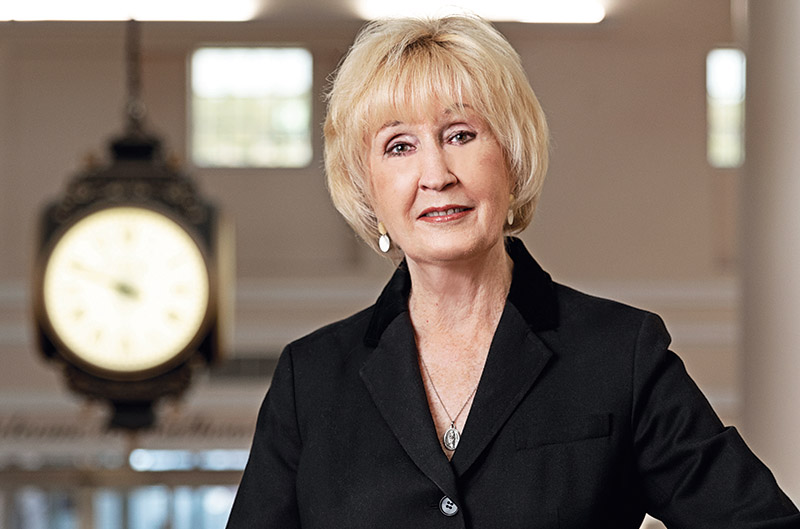 (Photo by Michael Cline Spencer)
Donna Girardot has a history of making things happen. Currently, she’s in her second year as chairwoman of the Wilmington International Airport’s authority board and is helping the airport’s expansion project, estimated at about $60 million, to move forward.

In addition to keeping up with the project’s progress – Phase II is well underway, and Phase III will begin in about a year – Girardot stays abreast of the airport’s other concerns.

“We’re trying to recruit new airlines and new destinations all the time,” she said. “But, as we grow, the county commissioners are telling us, ‘Don’t lose that Southern hospitality.’”

The biggest problem is parking, she said.

“We lack both long-term and short-term alternatives,” Girardot said. “We’re working with a consultant, but in the short term we’re going to convert the employee lot into overflow parking, and offer a shuttle service to remote parking for our employees.”

The terminal expansion plans call for the construction of two parking towers, but with transportation services such as Uber and Lyft as popular options, Girardot and other airport officials wonder whether that level of investment in airport parking makes sense.

Weighing information, pondering consequences and looking at options is all in a day’s work for Girardot, who has been involved in organizations and issues at the heart of the Cape Fear area since moving to Wilmington 22 years ago.

Leaving her position as executive director of the Hampton Roads Chamber of Commerce in southeastern Virginia after her husband became an assistant vice chancellor at the University of North Carolina Wilmington, Girardot was hired as governmental affairs director for what was then the Wilmington Regional Association of Realtors (now Cape Fear Realtors). From there, she was recruited by area homebuilders to head up the Wilmington-Cape Fear Home Builders Association.

It was 2002, and the construction industry was busy and profitable. But builders wanted their concerns and needs to be heard by legislators.

“The homebuilders said ‘We want to step up our political action,’” Girardot said.

So a year later, she helped found Business Alliance for a Sound Economy (BASE), whose sole mission is to advocate for the real estate, development and building industries. In addition to her leadership of WCFHBA, she became CEO of BASE.

“My theory is, you don’t go to a (legislative) body and protest. You participate in the drafting of (legislation),” Girardot said. “Both (WCFHBA and BASE) became real power players, involved in issues that impact these industries.”

The thing she’s proudest of, and the attribute she says is her most valuable, is her ability to be a consensus builder.

“I can be a tough negotiator, but I believe respect is the greatest thing you can give another human being,” she said. “You don’t dictate to people; you listen to them.”

Girardot’s philosophy, along with her skills in bringing people of differing views together, enabled her to lead her two construction-related organizations through the real estate downturn. She retired from both in December 2014, recommending Cameron Moore to succeed her at the homebuilders association and Tyler Newman to lead BASE.

“I had the privilege of working with both of them for a number of years and recruited both of them,” she said.

Fresh into retirement, Girardot was appointed to the New Hanover County Planning Board, where as chairwoman – twice – she has helped that body navigate some difficult terrain.

“I chaired the county’s comprehensive plan development,” she said, adding that her group worked with various competing interests to find common ground on the plan’s provisions.

The result: “We came with one document to the commissioners,” she said, “and they adopted it with almost no discussion.”

Crafting an acceptable county special use permit was more of a challenge. The process was drawn out, and the wrangling much publicized. Tapped to chair the process, Girardot decided that an abundance of communication was called for.

“We had a public hearing even though it was not required,” she said, recalling that several attendees read lengthy statements promoting their positions. After the hearing concluded, she motioned those attendees to the front of the room and invited them to join the process.

“I brought the various factions to the table, and they were part of the process from September to December,” she said. “By February of the following year (2017), the SUP was adopted.”

With that success behind her, Girardot, now as the planning board’s vice chairwoman, became the board’s representative on the Unified Development Ordinance project team.

Girardot says she likes to be thoroughly grounded – literally – on requests that come before the planning board.

“When I get the planning package, I review it and drive the site, even walk it. I think about traffic, about ingress and egress,” she said.  “Property is the most expensive and biggest asset most people have, so it’s important to make the best decision concerning it.”

“I have had four mentees in the WILMA (leadership) program,” she said. “I’ve always been a big advocate for women, in business in particular. It’s given me a great deal of pleasure.”