Checking In On Medical Office Space 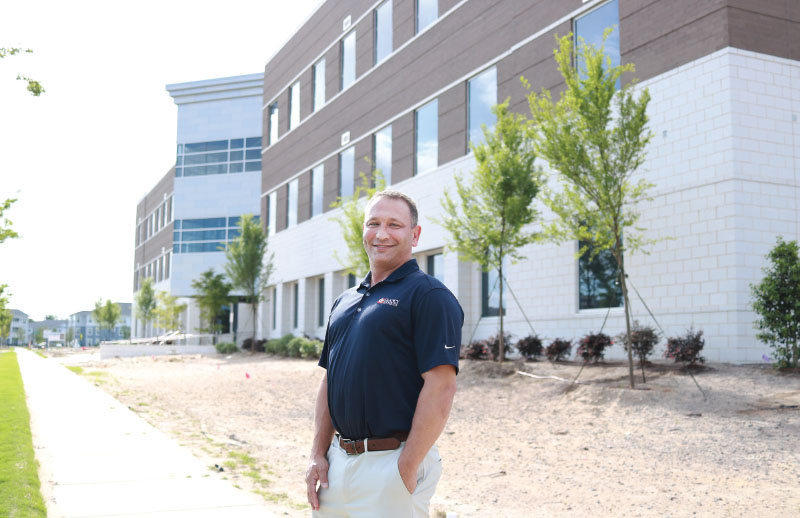 Brian Spaller is Clancy & Theys Construction Co. project manager working on the interior of Wlmington Health's new space at The Offices at Barclay. (Photo by Terah Wilson)
Like others in his profession, Wilmington-based commercial real estate broker Paul Loukas keeps an eye on the medical office market in the Cape Fear region.

The prognosis from Loukas and various local brokers is that the market’s current growth trends could continue because of a number of factors.

“Demand for medical office space has changed dramatically since health care reform took center stage in our national politics. Uncertainty about the future was a significant catalyst for the acquisitions of private practices,” Loukas said. “New Hanover Regional Medical Center and Wilmington Health are clearly the two major health care providers within our community that have showed significant and continuous growth. But the growth in our medical market is somewhat isolated, as we have not seen expansion in the smaller physician groups like we did in the previous decades.”

“We typically try to anticipate our needs three to five years out,” Bunch said. “Several of our buildings were constructed with expansion plans already in mind, and we plan to fill those spaces with new physicians and services as the patient population and demand around those offices continues to grow.”

One of the main drivers was the fact that the population of people ages 65 and older increased by more than 26% between 2010 and 2017, the CBRE report stated, with projections of 32% growth by 2025.

The second main driver, according to the report, was a decrease in the population of people who are uninsured; that percentage fell from 15.5% in 2010 to 8.7% in 2017.

“It follows a broader trend,” said Hill Rogers, broker in charge of Cameron Management. “If a market is growing in population, especially an older population, the need for health care services is going to be more enhanced for that population, that market, which would lead one to believe that there’s going to be growth in the medical office market.”

And brokers tend to go after tenants in industries that are growing, he said, adding that in the case of the first The Offices at Barclay building, “since Wilmington Health was the lead tenant, the anchor tenant, we want to keep this building a medical office building.

“We plan to build more buildings adjacent to it,” Rogers said. “They don’t have to be medical. I’d love for them to be something else for diversity.”

Another example of location being key is the facility that EmergeOrtho, a growing orthopedic practice in the Cape Fear region, has been building in Brunswick County, where retirees from northeastern states have been flocking for years. 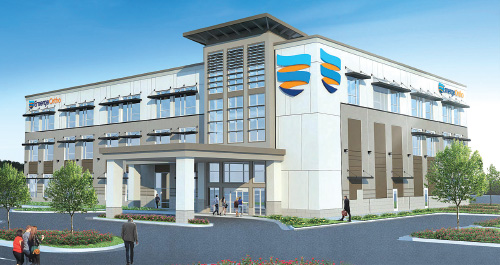 The three-story, 55,578-square foot facility (rendering shown above) was made possible through a certificate of need awarded to Brunswick Surgery Center by the N.C. Department of Health and Human Services, according to an EmergeOrtho news release.

“An analysis of the state’s 2016 facilities plan revealed the need for an additional operating room in Brunswick County to meet the needs of the growing population,” officials stated in the release.

The release also said, “This location at 1168 Cutlar Crossing in the Villages of Brunswick Forest will mean more convenience and less travel time for patients, not only in Brunswick County, but in New Hanover and Columbus counties, as well.” An additional benefit, according to EmergeOrtho officials:  Independent ambulatory surgery centers tend to be a more affordable setting than hospitals.

Another factor in the Wilmington area’s own uptick in demand for medical office space is the passage of time.

“In general, there’s a lot of older, less efficient, more obsolescent medical offices in town,” Rogers said. “As practices get bigger, those buildings are harder to more effectively operate a modern-day medical practice in.”

A trend in medical office space over the past 10 to 20 years, he said, has been similar to retail: “They go where the population growth is so they can be convenient. That bodes well for midtown,” Rogers said, referring to the area of Wilmington where the Barclay office park is located. “That’s why there’s a lot of practices in the Landfall/Mayfaire area whereas 50 or 60 years ago, all the doctors opened up their offices where the hospital was. That’s true for any community.”

Loukas said even with all of the consolidation of medical practices that has taken place, the area’s medical office market has a relatively low vacancy rate.

“I fully expect that some of the current medical office space will have some functional obsolescence in the future,” Loukas said. “Like all commercial real estate, the properties that have the right location and access will be prime for redevelopment opportunities.”

While public hospitals like New Hanover Regional Medical Center are growing, some of the demand for medical office space seems to be coming mainly from private providers such as Wilmington Health, said Brian Spaller, the Clancy & Theys Construction Co. project manager for the indoor upfit of Wilmington Health’s space at The Offices at Barclay.

“You’re seeing more of these big facilities going up all over the place that are private and not run by the hospital itself,” Spaller said.

Swain & Associates has included at least 75,000 square feet of medical facility space in its plan for CenterPoint, a $250 million mixeduse project that’s expected to rise in the coming years on land off Eastwood and Military Cutoff roads.

“When we began envisioning CenterPoint we realized that medical services needed to be an integral part of the development. Right now, the main campus for New Hanover Regional Medical Center is on the opposite side of town. It takes anywhere from 15 to 30 minutes to drive there, depending on the time of day. As our community continues to grow, chances are that drive time will increase,” said Jason Swain, developer with Swain & Associates. “Access to health care is critical, and in an emergency a drive across town may take entirely too long. That’s why we’ve committed to having a health care component to CenterPoint. We want residents in the northern portion of the city to be able to get to excellent quality medical care quickly and in a firstclass environment.”

“Our goal is to make access to health care, in every respect, as ‘painless’ as possible for our patients. We believe that this access is not isolated to the availability of appointments, though,” Bunch said. “The time people spend traveling to and from their doctor’s offices is time spent away from their families, work, etc., and we want to limit that. Based on this philosophy, for years, we have been placing our services in locations where our patients live, work and are able to enjoy the wonderful restaurants and shops that communities we serve have to offer. The Barclay development fit very nicely into this model.”

Looking toward the future as the Wilmington area continues to experience rapid growth, Loukas said, “I believe you will see new medical office space develop systematically throughout the region following residential growth and development. Although telemedicine has the potential to play a role in the need for less brick-and-mortar locations, as we are currently seeing in the retail sector, I still predict a robust medical office expansion over the next decade.”