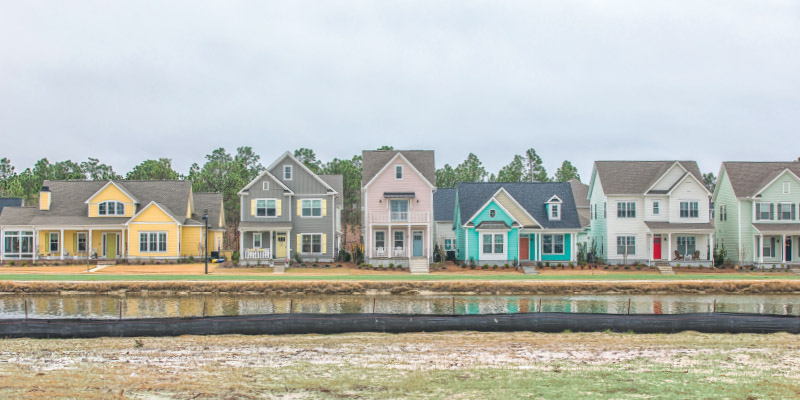 (Photos by T.J. Drechsel)
RiverLights, bordering the Cape Fear River in New Hanover County, is the latest example of development that has become increasingly popular in the Wilmington area: a planned residential community with adjacent commercial development.

Since developer Newland Communities first offered RiverLights lots for sale a few years ago, 340 have been purchased. That’s according to Jim Henry, Newland’s vice president of operations.

Although some of RiverLights’ amenities – the marina, for example – are still to come, the community boasts a village center with two restaurants, a beer and wine bar, 8,000 square feet of ground-level retail space and 43 second-story apartments. One more restaurant will be added to the mix.

“We have what everybody wants: a walkable community,” Henry said. “We have walking trails, and residents can walk to our clubhouse, restaurants and shopping.”

RiverLights developed about the same time as The Pointe at Barclay, 1.5 miles away, so its residents also have easy access to shopping, entertainment and restaurants there. At the same time, RiverLights’ new indoor golf facility and its restaurants, especially its popular Smoke on the Water, bring in people from other areas.

“Our main amenities are wide open to the public,” Henry continued. “We have business coming from all over Wilmington. We’re part of the midtown revival; people are discovering this part of town.”

Glenn Harbeck, Wilmington’s director of planning, development and transportation, says RiverLights has done a good job of planning its mix of services and has developed a “great system” of trails.

“They’ve done a super job designing and landscaping the parkway, and using roundabouts (to keep traffic moving),” he said. 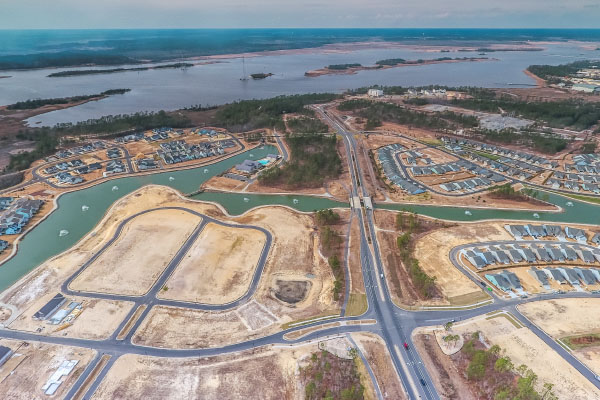 
“Commercial development follows residential development,” said David Swain. He should know. The longtime real estate developer, then living in Mount Airy, North Carolina, purchased a Landfall lot in 1985, building a home there several years later. In 1999, he bought 35 acres along a rural, two-lane Military Cutoff Road at what he considered an “exorbitant” price because he kept hearing demand for upscale retail and restaurants.

“As I lived in Landfall, I got acquainted with the neighborhood and my neighbors,” he recalled. “They said, ‘Our wives get on planes and go to Chicago, New York, Charlotte and Raleigh to buy their wardrobes. There is nothing in this area. Can you do something about that?’”

From his experience building shopping centers all over the state, Swain knew the kind of center he wanted to create adjacent to Landfall would need specialty shops.

“Wrightsville Beach, Landfall and Figure Eight – that was my market,” he said. “I wanted retailers who would provide something special, would call their customers by name and understand their desires. I went to Charlotte and Raleigh and picked the best (independent) merchants and enticed them to come down.” 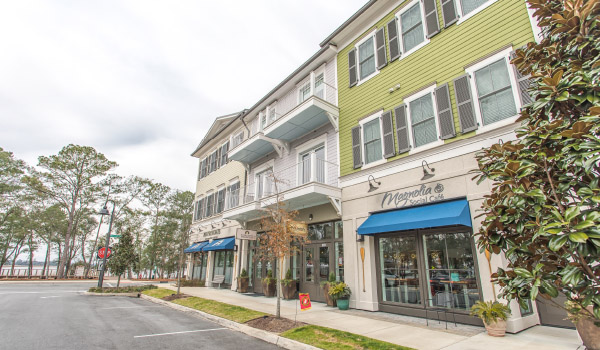 
Across from The Forum, Hyman Brody and the Zimmer family led another major mixed-use development that rose from farmland owned by the Parker family. That commercial center, Mayfaire, has become a regional draw, Swain said.

“Military Cutoff would never have been developed had it not been for Landfall,” he continued. “Landfall has an income group that attracts higher-end retail.”

The Landfall effect also influenced the creation of other planned neighborhoods as well as specialty retail and restaurants along Eastwood Road. Vacant land near the Eastwood-Military Cutoff intersection is now so limited that the only viable way to develop is to create multi-storied mixed-use communities, developers say. Swain’s upcoming CenterPoint development near that intersection will blend retail, restaurants, entertainment, office space and apartments in a pedestrian-friendly landscape.

In the 1990s, local developer Bobby Harrelson took the planned community concept across the river to Leland. He created the golf community of Magnolia Greens, followed that up with Waterford, and, more recently, Compass Pointe. Each of the two older communities has businesses at its front door, with new commercial development expanding choices for residents and visitors.

At the same time that Harrelson was reshaping the small town of Leland, a mammoth development in south Brunswick County was taking shape. St. James Plantation, first developed in 1995, “changed the landscape of Brunswick County all by itself,” said Dan Kingsbury, broker in charge and vice president of marketing and sales for the development.

The 6,000-acre community, which has become its own municipality, continues to be one of the top-selling areas in the county.

While St. James residents enjoy their amenities and activities, they also give back to the community, Kingsbury said, with charity and economic benefits.

“You put in 7,000 residents who have a lot of spending power, who are retirees with discretionary income, and it’s shocking what it’s done for Southport,” Kingsbury said. “There have been tens of millions of dollars of economic impact.”


Hundreds of Homes a Year


Up U.S. 17 in Leland, Brunswick Forest continues to expand the residential and business options available. Situated on more than 5,000 acres, the development is keeping up a steady pace of about 350 sales each year, said director of sales Jerry Helms. At present, Brunswick Forest has about 2,500 homes, with a probable final capacity of 4,000 to 6,000.

The community’s commercial village, which fronts U.S. 17 adjacent to the community entrance, sits on land owned by the developer. That fact has enabled Brunswick Forest to control the mix and the look of the businesses there, Helms said.

“We are very keen to attract businesses that will best help our efforts to serve our community but also will be good for the area,” he said. The area is about halfway developed, so there is room for more.

“I do believe communities like Brunswick Forest – starting with Magnolia Greens and Waterford – have created a huge economic impact in northern Brunswick County,” Helms said. “There is a mass of people that want (upscale) goods and services. Southport used to roll up its sidewalks after tourist season. Now it has good restaurants and businesses open year-round.”


Looking ahead, there may be more planned residential communities in store for the three-county area. But such developments are likely not going to happen in the city of Wilmington.

“Given that the city of Wilmington is pretty much built out, we really aren’t seeing any significant new bedroom communities being developed within the city limits,” Harbeck said.

There is, however, still about 100 developable square miles in northern New Hanover County, according to Kate Murphy, the county’s communications and outreach coordinator. She said that the county planning department has approved a project called Blue Clay Farms, just off Blue Clay Road, that will combine residential and supporting retail development.

No planned communities are in the approval pipeline for the roughly 50 undeveloped square miles in southern New Hanover County, Murphy said.

On the drawing board in Pender County is Blake Farm, planned for 1,300 acres in Hampstead. Development has paused because of litigation, but the concept has not changed.