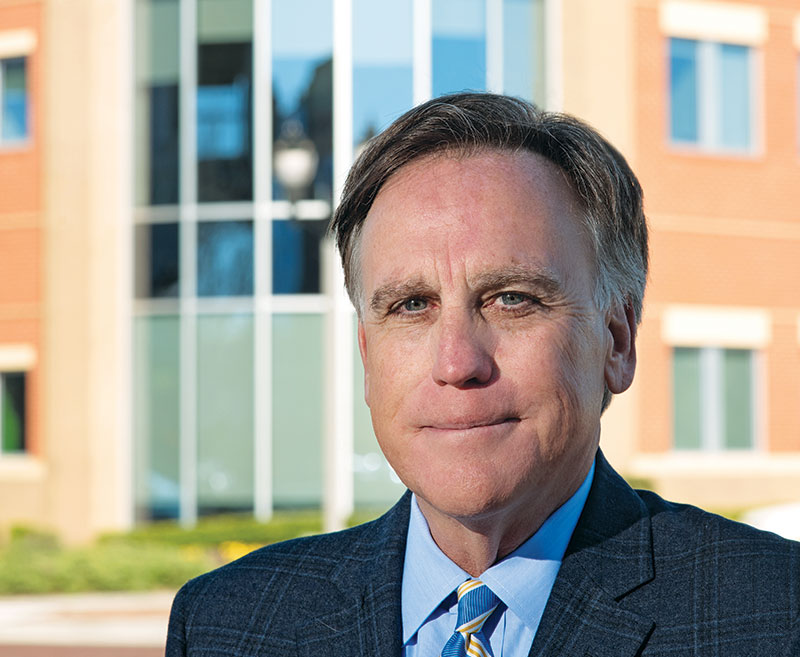 Steve Anderson weaved a career in office spaces from a material start. (photo by Michael Cline Spencer)
In a way, Steve Anderson’s path to becoming a developer of multi-million-dollar office spaces started with a tip about some alligator shirts.

Today, he’s known for leading the creation of six office buildings at Mayfaire in Wilmington, among other projects throughout the city. But his entrepreneurial journey began about 40 years ago.

In the late 1970s, Anderson, a senior at Hoggard High School, bought some Lacoste shirts at a low price from a manufacturing plant while visiting his brother in Winston-Salem.

“I sold them out of the trunk of my car at lunchtime and before school in the mornings,” Anderson said. “I doubled my money in a couple of days.”

The alligator shirt, later branded as Izod Lacoste, became the height of preppy attire in the 1970s and ’80s, but they weren’t cheap, selling in department stores for about $20 in the late 1970s. But Anderson and a high school buddy of his were able to offer the manufacturer’s castoffs at a price of $4.99 to $6.99.

Longtime Wilmingtonians still remember when Anderson started out in the clothing business.

“I’ve known Steve since 1976 when we used to go buy alligator shirts,” Wilmington Mayor Bill Saffo quipped in November, at a groundbreaking ceremony for Anderson’s latest The Offices at Mayfaire project. “He’s been an entrepreneur since he’s been in high school.”

The shirt business grew quickly, and in 1976 Anderson and his friend opened A&G Outlet in a 500-squarefoot space on South College Road. That was followed by two more stores, one in downtown Chapel Hill and one in Raleigh.

In the meantime, in 1974, Vanity Fair opened the first multi-store outlet center in Pennsylvania, and by the 1980s and 1990s, outlet malls were growing at a rapid pace throughout the U.S.

“Outlets came out of the basements of these manufacturers in these mill towns, and then all of the sudden just blew up everywhere,” Anderson said. “It became harder and harder for us to get all these goods.”

So he moved into first-quality clothing for men and women, changing the name of the business to A&G Sportswear. From 1979 to 1999, he operated a store at Hanover Center, next to the children’s clothing store his parents owned for 38 years, Tiny World.

A&G was open every day of the year except Christmas and Thanksgiving. One of Anderson's sons, Parker, who works with him in the development business these days, recalled his late nights.

“It was crazy because when he was in retail, I remember, he would come home at 7 or 8 o’clock at night, and by the time we’d wake up, he was gone. I’ll never forget, every day he would come home, and I’d get on the bed, and he’d stand at the foot of the bed, and I’d run as fast as I could and jump into his arms, and he would spin me and throw me back on the bed,” Parker Anderson said.

Parker Anderson is still having fun with his father, he said, in the business world. Now a graduate of the University of North Carolina Wilmington with a degree in communication studies, with a concentration in negotiation and conflict resolution, Parker Anderson interned with his father during his junior year.

“The internship is what really made me decide I wanted to get into development. We had so much fun, and I knew how hard it could be – in the good times, it’s good, and in the rough times, it’s rough,” Parker Anderson said.

Steve Anderson remembers the moment that sparked his second career in commercial development.

“I was literally sitting at the stoplight at 41st Street one morning going to work, and lease negotiations (at Hanover Center) were coming up … and there was a sign sitting on an empty lot,” Steve Anderson said. “I called my wife, Buffy, and I said, is this too crazy of an idea?”

He purchased the property, and in 1999, started his first development project: Anderson Square. The first phase of the two-building project was 15,000 square feet, and his clothing store, which by then he called Anderson Clothing Co., sold high-end men’s and women’s clothing and gifts.

His Anderson Square experience prompted him to turn more toward development and redevelopment. Although he remained in the clothing business until 2005, Anderson also created two more phases of Anderson Square, in 2003 and 2004. Other projects have included the 17th Street Medical Park in 2004 and the Howe Creek Landing office building in 2006.

People might think someone who has had such an impact on office space in Wilmington would have his own office, but the Andersons mainly work out in the field, in a space at their home or at Tribute Companies, the firm of Steve Anderson’s partner Mark Maynard.

But Steve Anderson is considering establishing some of his own office space outside those options.

“This is something that Parker’s working on me about. He’s got my ear. He said it might not be a bad thing if we start thinking about an office where we could actually hang a picture up, have a conference table …” Steve Anderson said.

When Parker Anderson said recently that his father has developed half a million square feet of office space in Wilmington, Steve Anderson corrected him, explaining that it’s not quite that much yet.