Wave Of Commercial Interest Near The Sea 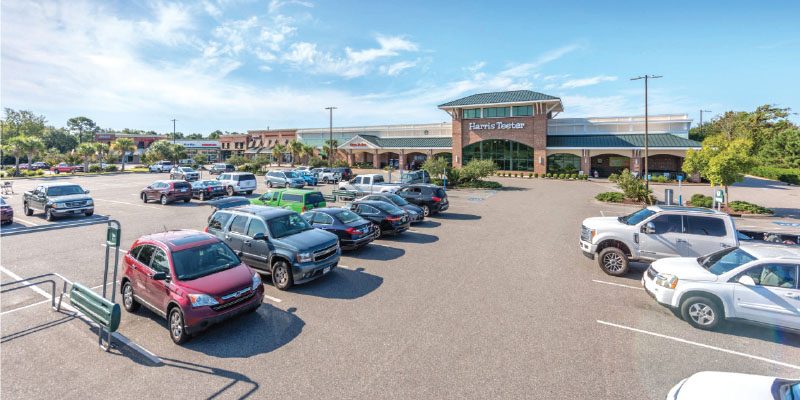 Brokers have fielded numerous calls about the outparcels available at Surf City Crossing, a Harris Teeter grocery store-anchored center at N.C. 210 and U.S. 17. (Photo c/o Weingarten Realty)
In recent years, existing residential growth and the potential for more around Pender County’s Topsail Island, including its largest town, Surf City, has drawn the interest of commercial developers and brokers.

Surf City has a year-round population of more than 2,300, according to a recent U.S. Census count.

But there are thousands more residents within a 5-mile radius, and an influx of tourists during the summer.

“Weingarten Realty sold Surf City Crossing and as a result of that sale, they were left with just the outparcels. They’ve hired us to represent them in selling the outparcels, which is some fabulous real estate on the way into Surf City,” Silivanch said.

Weingarten Realty’s website says the center “serves the growing submarkets of Surf City, Topsail Island and Hampstead. With little competition, this center benefits from an expansive trade area as well as from an influx of seasonal visitors.”

“There’s a lot going on up there. Just since we’ve had our stuff listed, the inquiry and call volume that we’ve had on the properties has been very exciting.”

The calls have been coming from a lot of different businesses, he said, including fast food chains, automotive retailers and medical office users.

According to his data, the population within a 5-mile radius of the center is nearly 11,000 people, a number that’s projected to grow to 13,000 by 2023, Silivanch said. Meanwhile the average median income is $52,200, “which is a strong median income for retailers,” he said.

Other brokers have noticed the swell in recent years.

“Fueled by a combination of the residential market pushing north from Wilmington as well as the construction of the new high-rise bridge, we have seen an increase of commercial interest and investment in Surf City over the last few years, since commercial tends to follow rooftops,” said Paul Loukas, broker in charge of Wilmington-based commercial real estate firm Cape Fear Commercial. “The Walmart Neighborhood Center and Publix are two prime examples of this.”

The Publix at The Arboretum at Surf City, a center anchored by the Publix grocery store and at the northwest corner of N.C. 210 and N.C. 50, opened in May 2018, adding another amenity to the growing area. Located at 2765 N.C. 210 in Hampstead, the center was developed by Surf City Topsail Partners LLC.

Headquartered in Florida, Publix has been growing its grocery store chain throughout the U.S., including in the Cape Fear region, with the most recent opening occurring in Carolina Beach on June 26.

In Surf City, CFC anticipates that a trend of growth will continue, “especially with the number of new homes anticipated in the area, including [homebuilder] D.R. Horton’s new master planned Waterside community, whose first phase will include over 160 homes,” Loukas said.

Plans for Waterside were boosted earlier this year with a $20 million loan to develop hundreds of single- family homes on the property, which is located at the intersection of Belt Road and N.C. 50.

Surf City Properties LLC borrowed $20.8 million from Trez Forman Capital Group to pay off a previous $2.5 million loan provided by Trez Forman for the land purchase and to cover development costs for construction of the homes, according to a news release in February.

The Waterside site was previously owned by Coterra until Surf City Properties purchased the 197 acres for $7 million in May 2018.

The property was previously approved as a Planned Unit Development with zoning that allows up to 3,200 single-family homes and multifamily units.

At the time, officials said Surf City is particularly attractive to buyers from the nearby Marine Corps Base Camp Lejeune facility, which has more than 47,000 personnel. It also serves as a convenient in-between location for families working in Jacksonville and Wilmington, stated the release.

Surf City Properties is based in Daphne, Alabama, and the company has worked on other North Carolina developments, including Collins Ridge in Hillsborough.

Currently, a lot of building is going on in the Hampstead area, something that was spurred in part by the creation of the Pluris sewer system, said Randy Cox, a commercial real estate broker with RE/MAX Essential and a member of the Surf City Planning Board. That has led builders that were primarily working in Wilmington to come to Hampstead for buildable sites, as available, developable land becomes even more scarce in neighboring New Hanover County.

Cox said new development in the works and some that has come in recent years is primarily in Surf City’s mainland territory.

“It’s very difficult to build on the island,” Cox said of Topsail. “You have to be on stilts and the bottom of the building has to be 3 feet above the mean high tide line or you have to build up your pad, which is expensive to do.”

In Surf City on the island, there are restaurants and a couple of small strip centers, but nothing new has been built there for about five years at least, Cox said.

A burst a few years ago of commercial building in the area, including the Publix and Walmart Neighborhood store and some other national chains, has slowed somewhat, he said.

Meanwhile, some neighbors have taken issue with a potential apartment development in the area. In general in Hampstead, Surf City and other parts of the Cape Fear region, “the commercial market is very hot right now,” Cox said. “It kind of feels like a top [of the market] to me. Everybody’s in a hurry to get things done and purchased and get them out of the ground.”