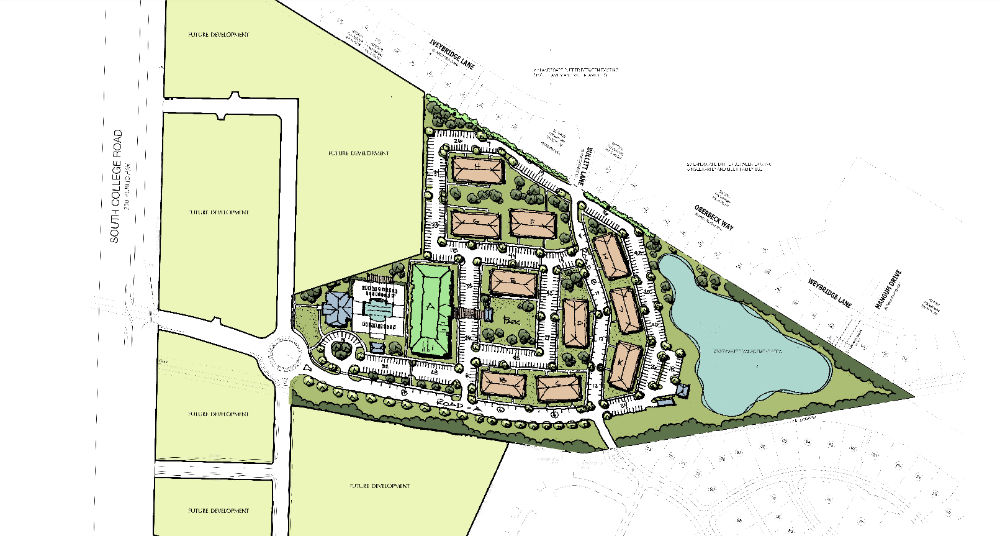 A preliminary site plan for apartments and amenities that would go along with them in the Whiskey Branch area off South College Road. (Plan courtesy of Cameron Management)
Plans to add more apartments to the Wilmington area's inventory are expected to continue this year, and they already include separate projects on South College Road and Carolina Beach Road, as well as a multifamily proposal on College Acres Drive.

The potential new South College Road apartments are expected to be part of the Whiskey Branch brand and could include 324 units, said Hill Rogers, broker in charge of Cameron Management.

Another 276 apartments have been proposed off Carolina Beach Road at 4456 and 4544 Fairview Drive, in a community that would be called Ansley Park, according to site plans submitted recently to the city of Wilmington by developer Core Property Capital.

For property at 4722 College Acres Drive, Paramounte Engineering has drawn plans for 45 multifamily units on 3.55 acres next to the University of North Carolina Wilmington campus, site plans show. The plans state that College Acres Development LLC of Myrtle Beach is the developer, and that the project would also include 1,900 square feet for retail use.

The Cameron-owned land where apartments could be built off South College Road is adjacent to the gated Whiskey Branch subdivision off Navaho Trail and Mohican Trail, where amenities have been built, including a pool and clubhouse, and dozens of homes and townhome-duplexes are under construction by Trusst Builder Group.

The Whiskey Branch development area is also expected to include a commercial center, with shops, boutiques and services within walking distance of the homes, according to the Whiskey Branch site map online.

The Whiskey Branch apartments (the exact name has not yet been determined but will likely include "at Whiskey Branch") would be on about 21 acres of more than 132 total, which includes the existing Whiskey Branch gated community on 68 acres. Rogers said the apartments will have their own separate amenity package.

The apartments would have to be considered by the New Hanover County Technical Review Committee, and could be on the TRC's February meeting agenda, before a rezoning request could be filed, Rogers said. The land is currently zoned for single-family homes rather than apartments.

Meanwhile, the plans for College Acres and Fairview drives are expected to be considered at the Wilmington Technical Review Committee's meeting Jan. 17, according to the city's project tracking website.

Of the demand for apartments in the Wilmington area, Rogers said, "As long as Wilmington continues to grow, I think there's going to be a demand for quality housing options in good locations everywhere."