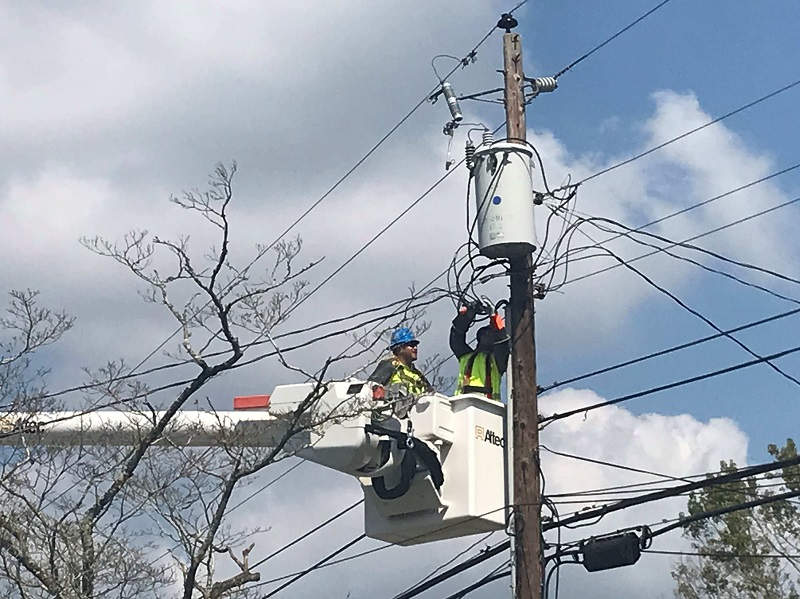 Duke Energy contractors work on power lines Thursday on Wrightsville Avenue in Wilmington. (Photo by Cece Nunn)
More than 20,000 Duke Energy customers were still without power Thursday, but some of the area's businesses and retail centers have come back online and are open or planning to open after Hurricane Florence.

Businesses, such as those in Mayfaire Town Center, have regained power and are working on resuming operations. Officials with the shopping center said Thursday morning that they were working with tenants, who were going back into the stores and assessing any damages.

Mayfaire, located off Military Cutoff Road in the northern part of New Hanover County, is set to open Friday with set hours of operation throughout the weekend, according to a news release.

Tenants started opening their storefronts in the shopping center Wednesday, Rogers said, and more were set to open Thursday.

"With a lot of restaurants, they had to get rid of inventory and it's been hard for them to get stocked with new supplies," Rogers said. “We didn’t suffer any property damages to speak of. We want businesses everywhere, not only The Pointe at Barclay, to get back open and return to normal as soon as possible."

Officials with both retail centers said to check with businesses directly for specific store hours and more information.

Although power and storm recovery efforts are helping many businesses return to some normalcy, there were still tens of thousands without power Thursday.
During a county-city briefing at 11:45 p.m. Thursday, local officials had some news to share about the local power situation.

New Hanover County Board of Commissioners Chairman Woody White said, “Duke Energy’s outage map showed approximately 24,000 households at 11:15 this morning without power. That is about a 77 percent reduction from the 108,000 that had no power during the storm."

Outages are spread out throughout the county, White said. Some of the areas that were without power Thursday morning that White mentioned include Castle Hayne, Kings Grant, Inland Greens, Forest Hills, Princess Place and the beach town areas.

As of 2 p.m. Thursday, Duke Energy's power outage map for New Hanover County reported more than 25,000 customers of the nearly 127,500 total in the county were without power. The latest estimated goal for power restoration to the entire county is 11:45 p.m. Sunday.

“We want to thank Duke Energy as well as ... their subcontractors; they are making a huge dent in this every hour and it's much, much appreciated," White said.

In an update from the city, Wilmington Mayor Bill Saffo expanded on some of its power issues. He said the city is having power outages at street lights and traffic signals at major intersections, some of which had already been turned back on since the hurricane passed.

In addition, the city is receiving calls from people in the South Oleander and Forest Hills area, who are still without power.

“Those areas, according to what Duke power has told me, were totally destroyed – the grid there was totally annihilated – so they are having to rebuild the entire electrical grid in those two particular areas specifically. And that includes the Glen Meade area behind the hospital specifically,” Saffo said.

Fuel has aided the powering of generators even after the storm. But Monday, a situation arose when the CFPUA was running low on fuel.

“Fuel concerns on Monday were quickly addressed with help from the New Hanover County Emergency Operations Center, Springer-Eubank, Colonial Terminals Inc., and external contractors—and we thank them for their assistance,” officials said in the release. “We made our announcement just before the resolution occurred because we wanted to err on the side of caution in the event the fuel situation could not be addressed."

CFPUA’s wastewater pipes became overwhelmed during the storm situations, which was slow-moving and produced major storm surge and flooding. And CFPUA operates more than 140 pump stations that move waste to its treatment plants.
“These pump stations are ‘hotspots,’ where any issue caused by flooding, power loss, or equipment failure can quickly result in a sanitary sewer overflow or SSO,” officials said in the release. “To provide a comparison for the unique challenge CFPUA faced during the hurricane, the City of Charlotte operates fewer than 10 pump stations throughout a service area that includes one million people.”

Due to power loss and flooding, CFPUA experienced 21 sewer releases, including one at the Southside Wastewater Treatment Plant, officials said. More than 5 million gallons of partially-treated wastewater was released into the Cape Fear River on Sept. 14 because of the failure of two back-up generators at the plant, which occurred during the height of the storm, at a time when it was not safe for employees to address the spill and repair the generator, officials said.

CFPUA lost power to most of its 148 pump stations at some point during the storm, officials said. It had more than 120 emergency generators fueled and refueled to take over during power loss.

"Duke Energy crews, when it was safe, began assisting CFPUA with restoring power to the affected stations. Commercial power has been restored to many stations, but many remain on generators and CFPUA crews continue to monitor and refuel them as necessary," officials said.

CFPUA is working to complete recovery in the coming days and weeks, and is conducting several measures including, produce a full damage assessment to restore every aspect of its system; continue to work with Duke Energy for complete power restoration; and compile data on its system for future planning, officials said.