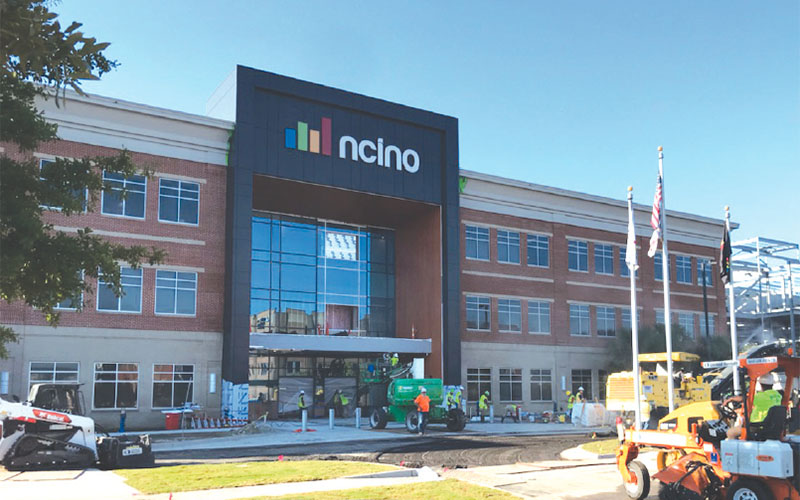 nCino continued to expand in the region in 2021 with office and parking deck expansions and a large purchase in November. (Photo by Cece Nunn)
This year, local technology firms continued to grab headlines with news of growth.

An emerging tech field that continued to mature and bring attention to the Wilmington region this past year was financial technology or fintech.

Wilmington-based nCino, having ridden the wave of its successful IPO launch in 2020 with shares going up 150% on opening day, began 2021 with an office expansion at its headquarters at 6770 Parker Farm Drive.

In February, developers submitted plans to add another 90,000-squarefoot office joining a project to add a five-story parking deck. This expansion would allow for 600 new employees to join the company’s more than 700 local employees as of April, officials confirmed.

The news was a signal of the company’s continued investment in Wilmington, CEO Pierre Naudé said at the time.

During this time, nCino also announced Wells Fargo, a major client who serves one in three households in the U.S., as a customer of its Bank Operating System.

The company also took steps to expand to the U.S. mortgage market. In November, nCino announced plans to purchase SimpleNexus for $1.2 billion. SimpleNexus is a digital mortgage platform that streamlines the homeownership process.

This deal would allow nCino to expand its offerings when it comes to the U.S. point-of-sale mortgage space and enhance nCino’s mobile and point-of-sale offerings, Naudé said in a press release.

Bringing nCino to a new mortgage lending market is estimated to expand nCino’s serviceable addressable market by over $4 billion, the release stated.

Following nCino’s news of progress, a young fintech company also shared plans of expansion with a five-year growth plan for its Wilmington operations.

Officials announced that the average salaries would be more than $80,000 and that the company would receive local economic incentives as well as a Job Development Investment Grant from the state.

The company was founded in 2017 by Dave Sweyer, and CEO Ben Currin said at the time that this expansion would allow the company to continue to innovate its software solutions for its customers.

For another fintech company that specializes in digital banking services, 2021 included announcements of partnerships to enhance its products and a large investment.

Apiture started the year with a $10 million investment under its belt from Bankers Healthcare Group. The company at the time said it would use to accelerate key features on its product roadmap for 2021.

We saw some of these key feature enhancements of its products throughout the year as the company formed partnerships.

Apiture in May announced a partnership with Zelle, an electronic money-transfer platform that would allow Apiture Xpress platform clients to send and receive payments through their digital banking applications.

In October, the company also partnered with Glia to provide digital customer service offered as Apiture Xpress Live ,giving banks and credit unions the option communicate with customers through messaging, video and voice.

In addition, the company also brought a digital bank account opening feature to its platform by partnering with MeridianLink in November. According to Apiture, providing an option to open bank accounts online responds to the growing reliance from consumers on using digital channels to conduct banking needs.

Litify, a legaltech company based in New York, announced in July it was opening an office in downtown Wilmington and hiring 50 employees. The platform provides ways to manage and streamline tasks, intakes, documents and client communication for various clients. It planned to hire roles in sales, services and product departments.

Suzy is another New York-based firm that joined Litify in opening an office in the region. The market research firm with a focus on technology and real-time research announced it was opening its technology hub in downtown Wilmington with 40 jobs.

William Mansfield, chief technology officer, said Wilmington’s emergence as a tech hub was an influencing factor in the company’s move and recruitment efforts.

Both of these companies aim to provide a hybrid workplace with office and remote work options.