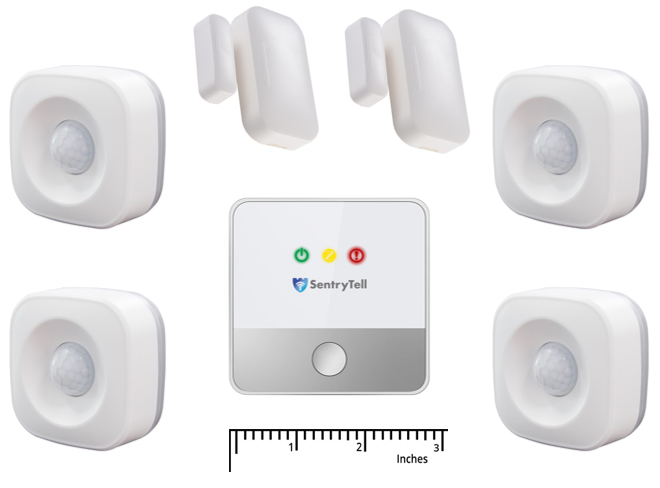 SentryTell, founded by CEO Alan Rupp, combines motion, door and smoke sensors that communicate activity to its system and develops a baseline for normal activity based on the seniors’ movements throughout the day, he said.

The idea for SentryTell came from Rupp’s personal experience with his parents, whom he suspected were beginning to experience health issues. With them living in Florida, continuously monitoring them was difficult even though Rupp would travel as often as he could.

Wanting a better way to see how they were doing on a day-to-day basis, he delved into his experience with wireless sensors.

“I’ve always been heavy into technology and knew the Zigbee wireless sensor technology pretty well, but no one had put it into any kind of system for seniors like this,” he said.

Developing the system using artificial intelligence was a two-year process, and the most challenging part was determining how to gauge the “normal” activity of a senior, which provides a control for determining what is not normal.

“We developed algorithms in our data warehouse that constantly analyzes a rolling 14 days’ worth of activity, filters out anomalies in that data and develops a baseline norm for the senior,” Rupp said. “The system does that for each of the four time periods; night, morning, afternoon and evening. This is a huge benefit to the user because now we are able to focus on activity levels that aren’t normal for the senior and make sure the user is aware of it when it happens.”

The local startup currently has two full-time employees, a contract team of data warehouse and app developers as well as a contract marketing team, Rupp said.

A feature of the system is that it is not intrusive on the seniors compared to alternatives like cameras or microphones.

“Seniors are much more accepting of this technology,” he said. “They don’t feel like they are being watched all the time, but they also know their caregivers (most likely their adult children) will know if something isn’t right in the home.”

Rupp said SentryTell is designed for seniors aging in place, a growing trend defined by the U.S. Centers for Disease Control and Prevention as "the ability to live in one's own home and community safely, independently, and comfortably, regardless of age, income, or ability level."

“There are whole industries forming around creating a safe physical environment for the senior who is aging in place,” Rupp said. “SentryTell is a great fit for this market.”