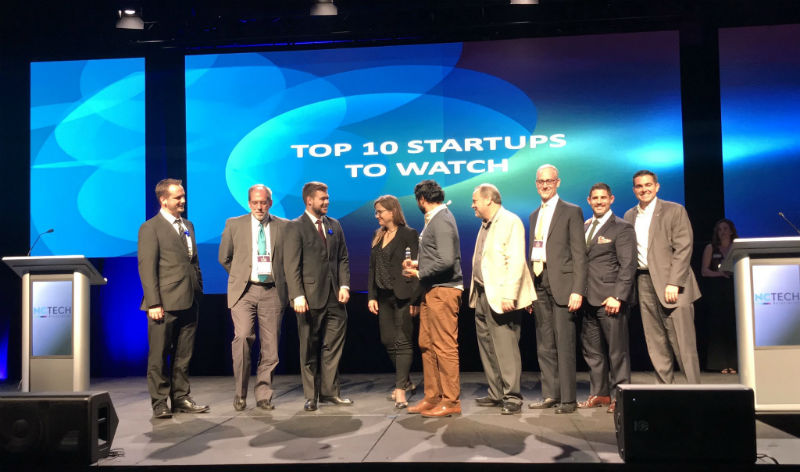 Wilmington-based SWELL Systems was named one of 10 startups to watch in the state at last nights NC TECH Awards. (Photo courtesy of NC TECH Association)
A Wilmington-based startup recently received recognition and others are raising money.

SWELL Systems Inc. was announced as a winner of the “Top 10 Startups to Watch” category at the 2019 NC TECH Awards Thursday night in Durham.

SWELL Systems is a software company that developed SWELLEnterprise, a cloud-based application for small businesses that manages client information, invoicing and email marketing leads, among other services.

“All credit goes to the SWELL Systems team, but I know that we were excited to be recognized and win the award,” founder and CEO Derek Schmidt said Friday. “I can speak on behalf of the team that it’s just great that we can bring more awareness to the Wilmington entrepreneurship community.”

The win gives the company credentials to enhance its brand and Schmidt hopes it will gain the company more name recognition, he said.

SWELL Systems was founded in 2017 and recently moved out of tekMountain to a bigger space in downtown Wilmington as a response to its recent growth.

“Year after year we continue to see a high level of excellence and innovation from the technology community in North Carolina,” Brooks Raiford, NC TECH’s president and CEO said in a news release. “We’re pleased to highlight such a diverse mix of companies and leaders at this year’s Awards event.”

Meanwhile, pet technology startup Petrics Inc. raised $50,000 out of its $500,000 goal, according to a filing with the U.S. Securities and Exchange Commission.

The money was raised from one investor through debt. Company officials did not disclose what the funding would be used for.

The company previously raised $772,458 through different private equity offerings since 2015. This brings the company’s total money raised to $822,458.

The startup, located at tekMountain, focuses on technology for monitoring the health of pets. It has developed the Petrics Health & Nutrition App which is available for download.

It is also developing a Petrics Activity Tracker and a Petrics Smart Pet Bed, both yet to be launched.

The virtual reality startup raised $25,000 through one investor in a private equity offering, according to a Nov. 6 SEC filling.

Brilliant Sole raised all the money it was looking to get. The company develops wearable VR technology that allows users to move and use their feet when using VR through shoe insoles.