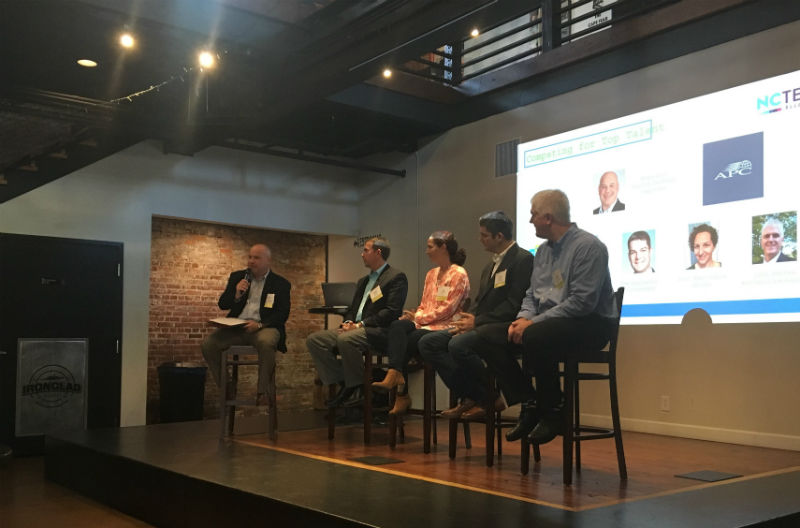 Moderator Harold Zeishner talks to panel of local company recruiters about challenges they face hiring and retaining tech talent. (Photo by Johanna Cano)
Recruiters from some of the area’s largest technology companies gathered this week in Wilmington to talk about some of the largest issues they face, including the lack of medium-sized businesses and trailing spouses, when it comes to finding the right talent for the job.

The panel was moderated by Harold Zeishner, senior business development manager at Alliance of Profesesionals & Consultants Inc., and it was hosted by NC TECH.

The topic was “Competing with Urban Markets for Top Tech Talent,” and the discussion was held at Ironclad Brewery, where the panelists discussed some challenges in the Wilmington area they say should be addressed to better stack up with other technology talent recruiting markets such as Charlotte and Raleigh.

While it may seem evident that the beach is one major alluring feature for workers moving to Wilmington, making the Port City seem attractive is not that simple.

It is also important to paint a picture of what is beyond the job, Eggleston said.

“What I always tell people is the job you're doing today is most likely not the job you're going to be doing in 18 months or it may look slightly different,” he said.

Sean Ahlum, senior director at tekMountain, chipped in from the audience to note that Wilmington is a unique market, but is lacking in mid-sized companies that draw in younger workers.

“One thing that Wilmington misses that attracts talent is the companies that are within 20 to maybe 50 people in size and scale,” Ahlum said. “That is where a lot of people coming out of universities or out of colleges get to go in and have a breadth of experience versus being niched which is what happens when they get into larger organizations.”

Those mid-sized companies would not only attract young talent but also provide more diversity when it comes to the type of companies that are in the community and help address the issue of trailing spouses, panelists said in the discussion.

“We absolutely have a trailing spouse problem. I have now been recruiting in Wilmington for 15 years. I will tell you every year it's become less of a problem, but it is still really hard,” Harrington said. “I think the recruiters in the room who are really good at what they do are really good at connecting those trailing spouses with companies to make that a little bit easier. If you're in the medical profession, awesome. Do you already in higher education? Awesome … but a lot of things outside of that, it can be really hard to place a trailing spouse.”

New Hanover Regional Medical Center, the largest employer in the area, has been helping with the trailing spouse problem, but there is a need for more manufacturing and medium-sized businesses, Harrington said.

What Live Oak Bank is doing to diversify the types of businesses in the area and diversify the talent pool is incentivizing all companies it does business with to come to Wilmington, Eggleston said.

“Every company that we're buying into whether for a joint venture or we’re investing in that company, our strategy is there's an incentive that's negotiated upfront for them to move operations here,” Eggleston said.

Wilmington used to be a closed community with not a lot of opportunities in tech, but that is no longer the case, Barbee said.

“My message behind all this is it will change over time,” Barbee said. “I would ask you to take a positive approach because Wilmington can be whatever we want, but we have to push it. It doesn't just happen; companies don't just show up and say, ‘I think I'll plant here.’ We have to make it.”