By Jenny Callison, posted May 6, 2016
Tweet
Four Wilmington-based startups each had its six minutes in the limelight Friday as part of the N.C. Technology Association’s annual State of Technology conference at the Durham Convention Center.

Lapetus Solutions, Likeli, Performance Culture and Petrics Inc. were among six Startup Showcase companies chosen by NCTA to pitch their products – and concepts – to the conference audience, estimated by observers at several hundred. 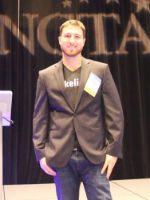 Likeli, a social affinity app developed by George Taylor III (at left), won the Startup Showcase. The winner was determined by crowd vote.

“I think they liked us because of our use of machine learning and use of data, but in a social environment,” he said Friday afternoon, explaining that Likeli, which mines data from many social media sources to suggest possible matches between people, “solves a problem everybody can understand."

And while Likeli uses complex algorithms and processes masses of data, “It engages users on the front end,” Taylor said.

The State of Technology was a great conference, and it was a “big deal” for the Wilmington technology community to get some recognition, Taylor continued, noting a data scientist from Wilmington-based Next Glass was on one of the breakout session panels – a nice boost for his brother Kurt's company.

On a personal note, George Taylor said it was nice to have his venture win the Startup Showcase.

“My brother’s company won it two years back, and now I can rub his nose in [Likeli’s win],” he said with a laugh.

Ahead of the event, Performance Culture founder and CEO Dallas Romanowski said his team was excited about the NCTA opportunity.

“Any type of PR is good, and we’ll get to share our story with an audience of more than 500 people,” he said Thursday. “Other appearances have resulted in new clients for us. As a showcase company we get a free vendor spot, which is perfect for us. We’ll set up a little booth and have handouts.”

Romanowski said he and company president Melissa Philippi would use part of their six minutes onstage to give a  brief demonstration of the Performance Culture’s web-based performance management system.

Petrics, which is currently in alpha testing and raising its seed round of financing, looked at its spotlight status as an opportunity to identify people who might help the venture “fill in the gaps,” founder Edward Hall said Thursday.

“We’re hoping to meet people who can help us meet our goals – who can advise, partner, work for the company – and to possibly meet additional investors,” he said.

Hall also hoped to get a feel for the current status of North Carolina’s technology sector, especially since the conference was partially focused on the growth of technology related to the Internet of Things, which concept Petrics will use to enable pet owners to remotely manage the feeding, care and health monitoring of their animals.

"We were all very proud of the four startups from Wilmington,” Jim Roberts, founder of Network for Entrepreneurs in Wilmington and angel funding organization Wilmington Angels for Local Entrepreneurs, wrote in an email Friday. “To have four out of the six companies from Wilmington was very impressive given the tech hot spot of Durham/Raleigh and size of Charlotte.”

The other two Startup Showcase participants were InsightFinder Inc. from Raleigh and Taste Analytics from Charlotte.

“Many Triangle VIPs gave me the thumbs up that they liked our startups and promised to get more active in my Network for Entrepreneurs in Wilmington events to learn more about our growing startup ecosystem,” Roberts said.