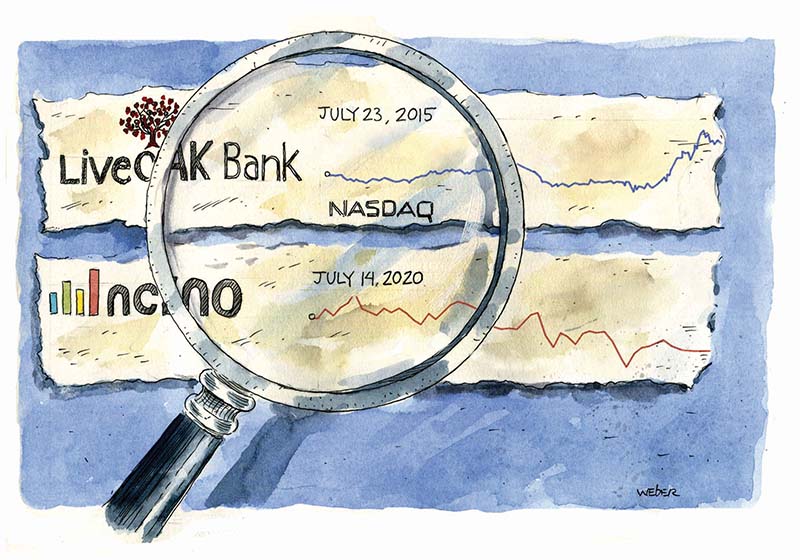 Overall stock performance for Live Oak Bancshares and nCino since their Nasdaq debuts (Illustration by Mark Weber)
Over the past year, the stock prices of Wilmington’s two public fintech companies have followed opposite trajectories. The price of nCino’s shares since its remarkable debut last July has slumped somewhat, while Live Oak Bancshares’ stock now commands the highest prices in its six-year history on the Nasdaq exchange.

With a market capitalization of more than $6 billion, nCino has more than twice the value of Live Oak, its former parent, which has a market cap of about $2.7 billion.

First, let’s look at nCino. Just before its Nasdaq IPO on July 14, 2020, the banking software company priced its shares at $31. Those shares were going for nearly three times that by the end of the first day. The price dropped within a couple of days but remained in the $70-$90 range for the remainder of 2020. Since the start of 2021, the highs have been in the $60s with lows around $50 in mid-May. Since then, however, the share price has inched up steadily back into the $60-$70 range.

Last November, Motley Fool contributor Keith Noonan wrote that he considered nCino’s stock “oversold.” He cited the stock price’s dip of 14% in September and further decline of 11.5% in October following a secondary public offering of more than 6.7 million shares earlier in the month. He did note, however, that the price was rallying at the time of his analysis.

In April, Simply Wall Street did a “risk check” on four points as a guide to potential investors. The firm noted that nCino is still unprofitable and not forecast to become profitable over the next three years.

Simply Wall Street also pointed out that nCino’s earnings are forecast to grow by an average of 13.1% per year for the next three years, although the company will remain unprofitable during that time. However, those analysts point out the company has sufficient cash for more than three years of operations, thanks to robust increases in revenues.

Two Wells Fargo analysts, Charles Nabhan and Timothy Willi, began covering nCino in June with an equal weight rating – meaning they believe the company’s stock price will perform in line with or similarly to the benchmark index being used for comparison.

“We view NCNO as on the forefront of digitization in financial services, and in particular, lending,” they wrote in early June. “Furthermore, we believe NCNO is in the early stages of pursuing a sizeable addressable market of $12B+ and is positioned to deliver predictable, multiyear growth of ~25%, as well as an eventual operating margin of 25-30%.”

As reasons to invest in the stock, the pair cited nCino’s spending on solutions that drive revenue and improve profitability, its progress on sales execution and product development initiatives, its partnership with Salesforce and its large recurring revenue base.

The analysts said that despite their favorable view of nCino’s outlook and industry backdrop, they are taking a “balanced approach” in their recommendations. They pointed to the company’s high valuation and “outperformance,” which could possibly be difficult to maintain.

Sharing the Wells Fargo analysts’ optimism are analysts from five other firms. Over the past three months, according to Nasdaq research, those analysts have issued “strong buy” recommendations for nCino stock.

During the pandemic, nCino was heavily involved in government-assisted lending to businesses in the U.S. and the U.K., according to company spokesman Ryan Kelly.

“We handled over a million applications and more than $100 billion in loans originated through the COVID government loan program, the Paycheck Protection Program (PPP), the Coronavirus Business Interruption Loan Scheme (CBILS) and the Bounce Back Loan Scheme (BBLS),” he said.

Kelly noted also that nCino’s client roster continues to expand with the addition of major banks in Canada, Germany and the U.K., as well as numerous financial institutions in the U.S. The company has broadened the offerings associated with its Bank Operating System and has added more than 300 people since its July 2020 IPO. The company now employs more than 1,200, most of whom work in Wilmington.

Meanwhile, across town, Live Oak Bancshares has seen its stock price rise from just under $14 per share in early July 2020 to more than $60 this summer.

“LOB has outperformed the S&P 500 – and in a big way – since approximately September 2020,” said William Sackley, professor of finance at University of North Carolina Wilmington’s Cameron School of Business.

Sackley compared Live Oak’s three-year annualized return of about 26% to that of 2.53% for banks on the S&P Banks Select Industry Index and that of 16.87% of companies on the S&P 500.

“Net income (in millions) shows a similar trend, with negative $7.6 for Q1 2020 and $39.43 for Q1 2021,” the professor noted. “LOB probably deserves the share price appreciation that it has achieved. Loan growth has been excellent, and the PPP loans were a welcome lagniappe. Also, and as has been similar at other well-managed banks, LOB was able to take a negative provision for loan losses during Q1 2021. This translates into saying that the negative impacts of the pandemic on the loan portfolio were not as high as once was expected.”

Industry research supports Sackley’s view of the company and its prospects. Nasdaq reported that four analysts from prominent firms recently forecast 12-month price targets between $70 and $75 for Live Oak and maintained a “buy” recommendation.