Shopping Center Planned In Leland, Could Include Publix 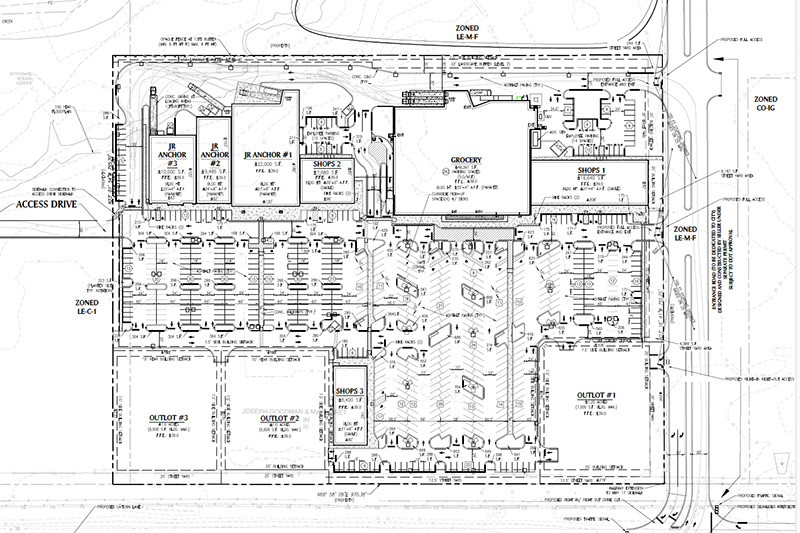 The Shoppes at Savannah Branch, planned near the intersection of Lanvale Road and Highway 17, is proposed to include up to 142,000 square feet of building space. (Photo courtesy of the Town of Leland)
A new shopping center is being planned on Highway 17 in Leland, anchored by a grocer, preliminary plans show.

That grocer is likely a Publix, Leland’s economic & community development director Gary Vidmar told the town’s Economic Development Committee earlier this month. However, Vidmar cautioned this was only the perception and that the tenant hadn’t yet been formally announced.

Reached Monday afternoon, a Publix spokesperson did not confirm the plans. "While we are always looking to bring Publix Super Markets to new neighborhoods across North Carolina, we do not have anything to share regarding the location you mentioned," the spokesperson said.

With 613 parking spaces, the development would span roughly 17 acres.

Leland’s Technical Review Committee (TRC) reviewed Phase 1 of the Shoppes at Savannah Branch on Oct. 26, according to a town spokesperson. The committee provided its comments to the applicant on Nov. 15, but so far, the developer hasn’t submitted plan revisions. “Once submitted, the TRC will review the plans again,” the town spokesperson said.

Marietta, Georgia-based Columbia Properties has worked on multiple Publix-anchored developments in the South, including in Wake Forest, North Carolina. A representative of Columbia did not immediately return a request to comment.

Over the past several years, all Publix locations in the Cape Fear region have opened along the coast. Publix has three locations in Wilmington and one in Oak Island, Ocean Isle Beach and Surf City.