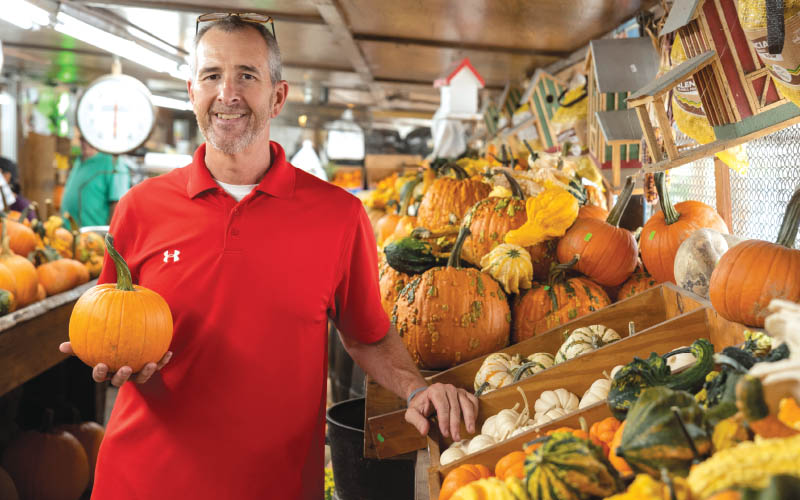 Sammy Flowers, general manager at Eagle Island Fruit & Seafood, said the family-owned grocery store carries produce based on the current season, including pumpkins during the fall. (Photo by Michael Cline Spencer)
Some of the small ones are named Baby Bear, Spooktacular and Winter Luxury. Some of the medium-sized ones are Autumn Gold and Jack-o-Lanterns, and the large ones include Ghost Rider and Phat Jack.

Pumpkins, a fruit part of the cucurbit family of plants, come in all sizes, colors and shapes and without a doubt, their presence in homes and foods mark the beginning of fall.

In 2017, North Carolina ranked fourth in pumpkin production in the U.S., making it the largest pumpkin- producing state on the Eastern Seaboard, according to a study from N.C. State University’s College of Agriculture and Life Sciences, the N.C. Cooperative Extension and the University of Tennessee’s Institute of Agriculture.

The economic value of the pumpkin crop in North Carolina was reported to be more than $15 million in 2016, stated the study.

Many Wilmington businesses and organizations start selling different pumpkin varieties even before the first day of fall.

Sammy Flowers, general manager and son of the store’s owners, said people were already buying many pumpkins, even while the hot, summer- like weather lingered.

“We sell quite a bit of pumpkins,” Flowers said. “We sell mostly on the weekends. In fact, we got in several bins last Wednesday, and there’s a major dent put in those. We’re getting really low.”

The family-owned grocery store opened in 1965 when Flowers’ grandparents decided to transition from being farmers to selling produce.

Flowers’ parents, Carolyn and Norris Flowers, took over ownership of the store in 1985. Norris Flowers died earlier this year at the age of 73.

The produce carried at the store are largely seasonal, and it strives to buy from local farmers.

“We’ll buy locally when we can, and when it’s all gone locally, we’ll buy regionally,” Sammy Flowers said. “We try to go wherever we can get it fresh.”

A produce that the grocery store doesn’t get locally is pumpkins. It gets them from Virginia.

“The business model we’ve had is to haul pumpkins out of other places where we know it’s successful,” he said. “We’re just not suited to grow quality pumpkins down here. I’m sure some folks can probably grow some, but probably not enough to supply all these local shops, produce markets and roadside stands around here.”

Out of the estimated 4,500 acres of pumpkins grown in the state, 3,000 of them are in the mountains of North Carolina, according to the study. That’s because growing conditions in higher elevations result in less disease in pumpkin plants.

Barr Evergreens, which sets up at 2715 Shipyard Blvd., sells Christmas trees and pumpkins shipped from its farm in Crumpler.

The Wesley Memorial Methodist Church’s pumpkin patch – a popular stop once it gets going Oct. 5 – gets its pumpkins from New Mexico.

Michael Lanier, owner of Old River Farms in Burgaw, has tried to grow pumpkins at his farm with varied success.

“They just don’t do that well here. There’s been several times when we’ve grown some really pretty ones, and honestly, I think it was just because we got lucky,” Lanier said. “Pumpkins don’t like the humidity. They don’t like to sit down in the mud. The one year that we got lucky, we planted them in a very sandy field … and they looked fantastic and we grew several thousand. Then the next year we tried it again, and it was just a miserable failure.”

The farm, which has been passed down for three generations, is primarily in the wholesale business.

A popular plant used for fall decoration that Old River Farms does grow is chrysanthemums, which the farm grew about 1,000 of this year.

Pumpkin-flavored items are also in demand during fall.

Annual sales of pumpkin-flavored products in the U.S. from August 2017 to August 2018 was about $489 million, a 15.5% growth from 2017, according to Nielsen, an information and data measurement firm.

Last years’ sales were the highest in the past five years, Nielsen’s report stated.

Marketing agencies note that the 2003 launch of Starbucks’ Pumpkin Spice Latte, a drink that generates $80 million in annual revenue for the chain each year, marked the start of the popularity of the fall flavor.

That drink’s success has inspired other businesses to sell their own pumpkin-flavored products, including some in Wilmington.

Drift Coffee & Kitchen has crafted its version of the pumpkin spice latte. Spoonfed Kitchen and Bakeshop has a menu of autumnal beverages, as well as pumpkin French toast. And Cape Fear Rum Cake has a pumpkin chocolate chip version of its cake.

For those who enjoy them, pumpkins and pumpkin-flavored foods are a way to say goodbye to summer.

“We’re in the transition from summer to fall,” Sammy Flowers said, “and once you start seeing pumpkins, mountain apples, dried corn stalks and the mums come in, it’s kind of time to move on into some cool weather where you can wear jeans and a sweatshirt.”