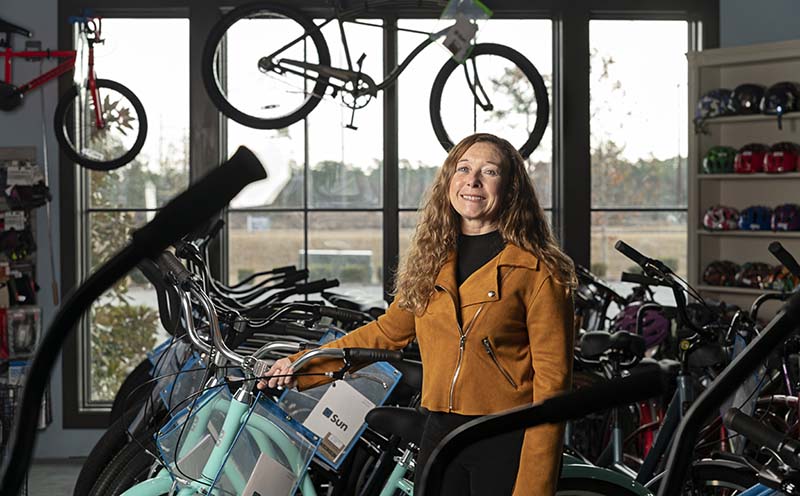 Diane Hodapp, owner of Shore Break Bikes in Marina Village at Riverlights in Wilmington, has seen an increase in business during the pandemic. (Photo by Michael Cline Spencer)
Since she left the corporate world less than 10 years ago, Diane Hodapp has been on a roll.

Finding herself with a wide range of choices for a new career, Hodapp was riding her bike near her Carolina Beach home one day when she said to herself, “Why not a bike shop?” Selling bikes would, she thought, offer a product the beach market needed and draw on her interest in biking and exercise.

“I ended up expanding three times – up to 4,000 square feet,” she said. Hodapp’s earlier career experience served her well as she turned to retail.

“I spent many years designing and opening retail stores,” she said. “I traveled extensively and knew the ins and outs of opening retail stores. I then got into the construction side and started doing project management for contracts on military bases. That led to government contracts. It was challenging because there was a lot of traveling.”

Originally from Minnesota, Hodapp has lived in New Hanover County for more than 20 years, so she understood the market as she envisioned her enterprise. Her new store initially focused on bike sales, representing 10 lines of bicycles, but demand pushed Hodapp to offer repairs, parts and accessories and – ultimately – bike rentals.

Although Carolina Beach had a number of other bike rental companies, her customers preferred to rent from her for visiting friends and family members. And by 2019, she was servicing the bikes of other rental companies.

When she bought a home in Riverlights, Hodapp decided the burgeoning area would be the perfect place for a second Shore Break Bikes location. She found a 1,400-squarefoot retail space in the mammoth development’s village area and rolled in her inventory this past August.

“A lot [of the interest] started when the gyms shut down,” Hodapp said. “Biking is a good way to get exercise and social distance. There are a lot of new riders. Fortunately, I have 10 bike vendors and about six other vendors for parts and accessories.”

It all sounded ideal: Riverlights is a very bike-friendly community. A comprehensive system of bike trails reflects the interest of the development’s residents in outdoor activity.

“There are a lot of new-to-themarket residents at Riverlights. Some come from this area, but many are from out of state, transplants from mostly colder climates. Then there’s the Del Webb community, which is growing tremendously,” Hodapp said. “When they redid the roads here, they did a good job with bike lanes; the bike path here is awesome. There’s a 32-acre lake with a bike path around it. You can go out and ride 10 to 15 miles but not be mixed in with traffic. That’s a big plus.”

The market was hot, but there was a slight problem: inventory. All those new riders wanted bikes, and the supply couldn’t meet the demand.

“When my new space was upfitted, I was down to four bikes in Carolina Beach, although I was doing over 100 repairs,” she said. “Other shops experienced the same thing: sSince there were no new bikes available, people were getting their old ones repaired.”

Hodapp, like other bicycle retailers, was competing for limited stock. She was back-ordering or getting placed on a waiting list.

Facing reality, she realized she couldn’t keep two shops filled with new inventory. So she closed the Carolina Beach store and is currently focusing her efforts on stocking the Riverlights location.

“Ordering is 10 times the work than it used to be,” she said, adding that it’s now probably a full day’s work to place orders. “While we’re well-stocked right now, we’re back-ordering bikes for the summer, and how do I know now what I will be selling in the summer? Planning and cash flow are terribly important.”

Hodapp doesn’t see the picture changing for at least a year.

“It’s a matter of distributors catching up with deliveries out of China and Taiwan,” she said. “Anything bike-related comes out of [those countries]. Some of these vendors have large warehouses and not a bike in them. There have been COVID problems, and the Chinese New Year is coming up. I think it will be spring 2022 before we see anything close to what we had originally.”

Patience is key for Hodapp.

“I am fully staffed; I can’t complain,” she said. “I’ve got good customers from Carolina Beach who have followed me, and new customers from Riverlights.”

While fat-tired beach bikes and traditional street bicycles continue to be popular, Hodapp sees increased interest in hybrid bikes that can adapt to a variety of environments, from coastal bike paths to rugged off-road terrain.

“People want versatile bikes,” she said. “They want some gears but not a ton of gears. A lot more people are traveling with their bikes, so they buy car racks. More people are doing staycations and local traveling, so they’re taking their bikes with them. They want a bike that can go anywhere.”

Hodapp believes the interest in cycling will continue.

“I’m already looking for larger space here in Riverlights,” she said, “And I have plans to expand back into Carolina Beach once products are available.”