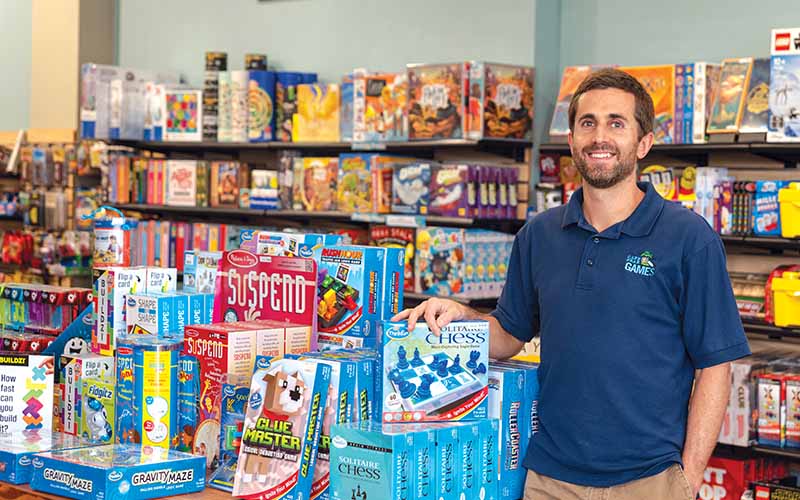 Board games and puzzles have increased in popularity during the pandemic, says Heath Newton, owner of Cape Fear Games in Wilmington. (Photo by Michael Cline Spencer)
These days, for work, school and even socializing, everyone is spending a great deal of time in front of various screens. Offering an escape from computers, TVs and phones, board games have made a formidable comeback.

Games of both strategy and silliness are flying off the shelves of local shops.

There are many fun options for kids of all ages seeking real interaction with real people.

“I noticed, and it was true for our family as well, that people are watching more Netflix, more TV, more movies together, but it gets old and you crave interaction again,” said Heath Newton, owner of Cape Fear Games on Oleander Drive in Wilmington. “Board games and puzzles, things you can do with family and close friends, give us the interaction that our bodies need.”

When the pandemic first kept people at home, the first jump in popularity that Newton noticed was with puzzles.

“Previously, we had sold some, but that was slower than many sections in the store, but within days of reopening with our curbside pickup and call in and order online option, we sold out of every single puzzle we had,” Newton said. “We were scrambling. It was pretty wild. Each shipment that came in, we would sell out again.”

Board game popularity shot up, too, with an uptick in games of strategy like Rivals for Catan or card games like Exploding Kittens.

“We have sold a whole lot of these very social games. Players can interact by getting to barter with each other or with silly card games that do not require a lot of thought or strategy,” Newton explained.

A return of old favorites includes a blast from the past, Dungeons & Dragons, a fantasy role-playing game that has increased in popularity once again, according to Newton.

Whether players meet in person, play over webcam, or meet in a park to play, it is clear D&D, a franchise since 1974, has made a comeback.

“So many people who may have played way back in the day didn’t know it was still around, but with podcasts and YouTube videos coming out about it, people see how really approachable it is now,” Newton said. “Many families are playing it with their kids.”

These games of strategy also get parents excited to give their kids an alternative to video games.

“It is a good way to get kids to think outside the box. These games present kids with a situation, and they have to figure out how to get out of that situation where video games have a very clear path,” Newton said.

For Newton, the popularity of these games has allowed Cape Fear Games to thrive during this difficult time for most businesses.

He knows this all too well considering his other business, The Sideboard, Wilmington’s first board game cafe, has had to close its doors due to the COVID-19 pandemic.

“The Sideboard has been the complete opposite. It is a terrible business model during COVID,” Newton said. “Eating and playing games with people during COVID is not the best business model. We are planning to reopen, but we are not sure when that might happen.”

Mark Fair, owner of Learning Express Toys in Wilmington, has seen a similar increase in popularity of family-friendly games.

“We have definitely seen an increase in, a coming back to, more traditional games,” Fair said. “People seem to be moving away from electronic games and going back to more family-oriented games.”

It seems, according to Fair, that game nights and pretend play have returned to take center stage amid the pandemic.

“With the kids learning from home and in front of screens all day, customers are looking for ways to get kids to do something else. Outdoor stuff has been flying off the shelves, and it has been difficult to keep inventory up,” Fair explained.

Customers seem to be exceptionally appreciative of these options to keep kids active and interactive, which Fair, as a father himself, said needs to remain a clear focus of families.

“From the perspective of a dad, it is very important to spend time with kids and do things to engage their imaginations. A lot of what we offer spawns the love of play and learning and engages them in a way video games do not,” Fair said.

Toys that reconnect family and friends are among the top hits.

One example is the Toniebox, which plays music and tells stories and enables loved ones to share in the fun from afar.

With games in such high demand this year, Fair encourages people to get their holiday shopping done earlier rather than later.

Fair describes a number of toys and games gift ideas that are sure to be a hit.

From storytelling speakers to logic-based games of strategy, staying engaged is at the heart of these interactive activities.

Fair said, “We can’t lose sight of kids learning how to talk with their peers.”